During evolution, our body has developed several mechanisms that oppose the progression of various diseases, such as cancer. Our recent study has revealed a new barrier that cancer cells have to overcome during both tumour initiation and dissemination (i.e. metastasis) to other organs. Failure to do so leads to the death of cancer cells; therefore, this barrier is a protective, tumor suppressive mechanism.

In this study, we examined the role of the activin B/ALK7 signaling pathway during the progression of pancreatic neuroendocrine tumors (PanNETs), which develop in the islets of the pancreas, and breast cancer. ALK7 is a member of the TGFß receptor superfamily and upon binding to its ligand, activin B, initiates a cascade of biochemical reactions inside cells that leads to different outcomes. For example, during physiological conditions, activins have been shown to regulate the secretion of insulin by the ß-cells, the cell of origin of most PanNETs, that reside in the islets of the pancreas. 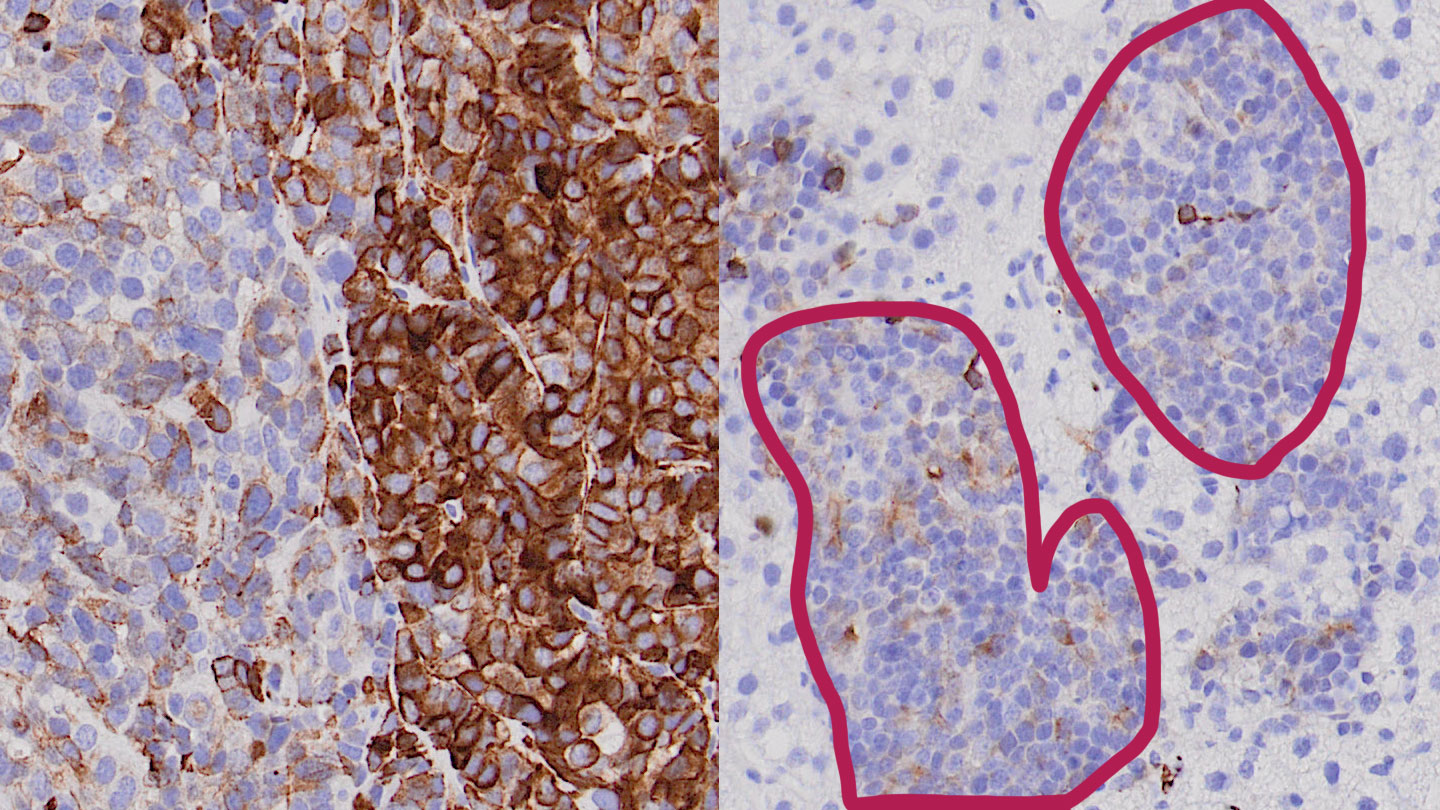 Figure - Left: In the primary tumor, the protective barrier is abrogated by downregulation of activin B (not shown), and additionally by suppression of ALK7 expression (brown staining) only in a subset of cancer cells. Right: Lack of ALK7 expression enables disseminated cancer cells to evade cell death otherwise induced by activin B secreted by the local environment at the metastatic site. Circled area: liver metastasis.

Using a series of in vivo experiments, including genetically engineered mouse models, we demonstrated that abrogation of this signaling pathway by genetic inactivation of ALK7 enhanced the progression of PanNETs and breast cancer, and promoted metastasis to the liver, the lungs, and the brain. Using cell-based assays, we showed that activation of ALK7 in cancer cells by activin B triggers cell death via a process termed as apoptosis. Subsequently, we examined which cells secrete activin B, and discovered that in the tumor, it is secreted by premalignant cells (i.e., autocrine signaling). We found that during the initial stages, cancer cells evade this pro-apoptotic barrier by either downregulating the expression of activin B, or both activin B and its receptor ALK7. However, during dissemination to other organs, cancer cells encounter activin B secreted by different cell types (i.e., paracrine signaling), such as the endothelial cells that reside in the blood vessels. In this case, cancer cells have to downregulate the ALK7 receptor to successfully escape the paracrine pro-apoptotic barrier.

Importantly, we demonstrated that the ALK7 tumor suppressive pathway is relevant to the progression of human malignancies. Accordingly, we showed that high ALK7 expression is associated with longer relapse-free survival (prolonged time for reappearance) of patients with PanNETs, as well as colon and breast cancer. Intriguingly, high ALK7 expression was also associated with longer distant-metastasis relapse-free survival (prolonged time for the appearance of metastasis) of breast cancer patients.

Overall, our study introduced a new homeostatic barrier that cancer cells must overcome and highlights the importance of delineating the basic biological principles that dictate tumor progression.