Bacteria commonly experience the threat of predation by grazing macroscopic organisms, viruses, and even other bacteria. One such predatory bacterium is Bdellovibrio bacteriovorus, which bores into its Gram-negative prey and consumes them from within. When the prey bacterium Vibrio cholerae produces surface-associated groups known as biofilms, they can establish a cell-cell packing that prevents access by predatory B. bacteriovorus, which is left to hunt down solitary prey or cells in young biofilm clusters that have not yet reached their packing protection threshold. This pattern of predation activity dramatically changes prey population spatial distribution and the ability of other potential resident bacteria to colonize the biofilm periphery.

Bacteria and other microbes often grow in groups, or biofilms, that are surface-bound or free-floating and encased in a secreted polymer matrix that holds cells to each other and/or the surface. The matrix strongly influences cellular-scale group architecture, which in turn influences biofilms’ collective properties. Biofilm formation can serve numerous functions, including holding a cell group in proximity to a nutrition source, aiding in competition with other strains or species, and protection from a wide range of exogenous threats. One ubiquitous threat is predation, and recent work has begun investigating predator-prey interaction in biofilms at high spatial and temporal resolution. The bacterial predator Bdellovibrio bacteriovorus (and similar organisms) is particularly common, including in marine and estuarine environments. Here we used microfluidic culture and high-resolution confocal microscopy to observe and quantify Bdellovibrio predation in biofilms of Vibrio cholerae. A notorious human pathogen, V. cholerae and other members of the Vibrio clade are also common members of marine and estuarine aquatic ecosystems, where they can be frequently preyed upon by Bdellovibrio spp. 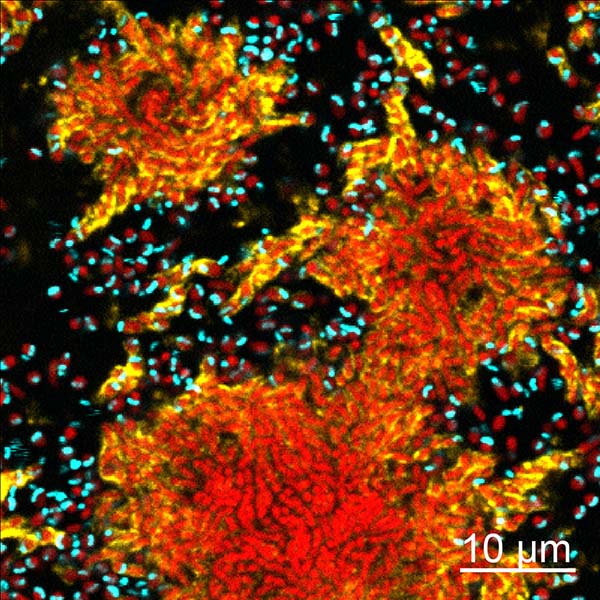 Figure: A confocal micrograph of biofilm clusters of Vibrio cholerae (red) producing extracellular matrix (yellow; labeled here via immunostaining of the matrix protein RbmA), under attack by the bacterial predator Bdellovibrio bacteriovorus (cyan). The predators can readily attach to, invade, and consume solitary prey cells, as well as prey inside small clusters that have begun to produce extracellular matrix. The interior of larger biofilm clusters, which have relatively high architectural cell packing, are protected from predator exposure.

We grew biofilms of V. cholerae in microfluidic culture for 24-48 hours before introducing predators to the system, and it was quickly clear that while predation events were common, they were not randomly distributed in space. In particular, solitary prey cells were highly susceptible to being found and consumed by B. bacteriovorus, as were small groups of cells that had already begun producing biofilm extracellular matrix. The center regions of larger biofilm clusters, on the other hand, looked to be completely protected from predator exposure (see figure). To better understand how prey biofilm architecture influences predation by B. bacteriovorus, we quantified the amount of local matrix, the local cell density (how much space was filled with other prey cells), and the neighborhood cell density systematically through all imaging volumes from our experiments. We found that extracellular matrix alone was not enough to block predators from killing prey; rather, the prey biofilms must reach a critical neighborhood cell packing, past which the group, as a whole, becomes almost completely protected from predator access.

The cell packing protection mechanism that we observed strongly impacts downstream biofilm spatial distribution, as well as community assembly. First, because predators can kill solitary and small groups of prey, only large biofilm clusters survive predator exposure, and as a result, on longer time scales, predator-exposed biofilms become a mixture of open space and only very large prey clusters. In contrast, biofilms without predator exposure have little or no open space and a far wider distribution of biofilm cell cluster sizes as they continue to grow. Second, though prey cells on the interior of large biofilm clusters are protected from predation due to their cell packing, cells on the periphery of large biofilms remain exposed to predation by B. bacteriovorus. This grazing activity partially disrupts the periphery matrix architecture, which in turn makes it far easier for other bacteria of the same or other species to colonize and engraft on the growing prey biofilm.

Altogether, our work provides a detailed view of how bacterial collective behavior, analogous in many ways to schooling, flocking, or swarming among metazoans, confers group-level protection against attack by the predator Bdellovibrio bacteriovorus. The cell-packing protection threshold past which V. cholerae biofilms block predator access in turn can change a biofilm community’s overall spatial distribution and colonization on spatial scales of hundreds or thousands of cell lengths.