We developed a new two-component 2D protein material able to block endocytosis of cell receptors. Our results pave the way towards a new generation of synthetic bio-materials designed to modulate cell responses and reshape synthetic and living systems.

One of the major aims of biomaterial engineering is to make building blocks that spontaneously assemble into materials offering desired properties at a specific time and place. Achieving this with protein building blocks is an immense challenge, but it would offer major advantages over chemical building blocks. Indeed, life has evolved proteins to do almost anything: from enzymes producing desired biologically active compounds, to cell ligands, which can bind to cells and remodel their shape and/or change their behaviour.  So, if we learn how to design proteins to make them assemble into any scaffold we want, and when we want, then it would be trivial to functionalize this dynamic scaffold: we just need to genetically fuse the designed scaffold protein and the protein bringing the function we seek.

Cells interact with their environment via receptors at their surface, which can bind to a plethora of ligands (hormones, neurotransmitters). Ligand-binding usually elicits signalling, but also clustering-mediated endocytosis, which is a way for the cell to downregulate the signals via lysosomal degradation. This propensity of cells to internalize clustered receptors has been proposed to lower the efficiency of immunotherapy, as internalization of the receptor/antibody complex will lead to the degradation the antibody as well, so more antibody must always be injected.

There are two main novelties in our recently published paper in Nature. Firstly, this is a breakthrough in protein design in its own right, and secondly, this is the first-time protein design and cell biology synergize to do something new: tune the endocytic rate of transmembrane receptors. In other words, synthetic biology not to do something new that biology does not do, but rather to address an existing biological problem in a totally new way. 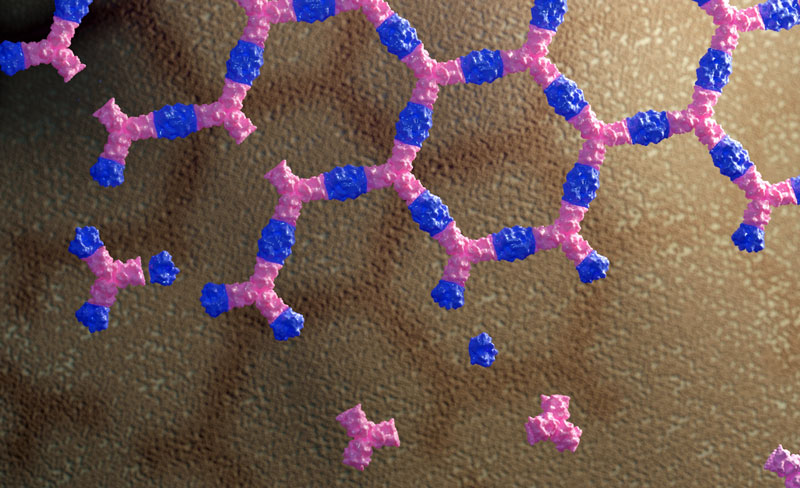 Figure 1: A sheet of proteins (pink and blue) forms a honeycomb-like structure over the surface of a cell (credit: Ian C Haydon, UW Institute for Protein Design).

This is the first synthetic two-component 2D material made with proteins. In other words, we show that we can take two proteins, which have never seen each other, and engineer from scratch an interface between them to do something we want, that is, assemble in a flat honeycomb structure that is virtually infinite in size (2D hexagonal array, 31 nm unit size, see figure 1). This is a computational breakthrough, and what is remarkable is how the actual structure the material forms is virtually identical to the design model. This really showcases how advanced protein design is today. Having a material made with designed proteins makes it versatile and easy to work with. For instance, we demonstrate that our designed proteins never aggregate and can be functionalised with almost anything without affecting their assembly properties (they have been designed that way). Similarly, because the material is made of two components, we have perfect control over when the material assembles (unless we mix the two proteins, nothing happens). We envision that the computational method we developed to achieve this could be applied to design a new generation of sheet-like materials, for instance with different thickness, bending rigidity, hexagon size etc.

Figure 2: Synthetic design of a membrane organiser. Top row: when ligands bind to cell receptors, they are clustered, which leads to their endocytosis and degradation by the cell. Bottom row: in contrast, when receptors are clustered via the novel two component 2D material we designed, receptor clusters are stable at the plasma membrane for hours, or even days.

We then used this novel material to modulate receptor clustering. Using advanced quantitative microscopy, we demonstrated that our material can cluster receptors very quickly (~20s) into a myriad of receptor ‘islands’ at the surface of the cell (see figure 2). Importantly, we have complete control over these islands: we can control their final size, and also growth kinetics, by tuning the polymer. In addition, we demonstrated that the 2D honeycomb structure of the polymer is maintained when the polymer assembles on membranes. This is important as it implies that polymer clusters receptors in an ordered fashion. In other words, our polymer is able to impose order onto disordered biological membranes containing freely diffusing receptors. This is a major improvement over all other existing clustering methods, which usually rely on aggregation and thus do not offer any kind of control over the receptor clusters they induce.

We then used this polymer to gain key insight into the fundamental biological process of receptor uptake. We demonstrated that provided we make our receptor islands big enough, they resist endocytosis and stay at the plasma membrane for hours, or even days. This is in sharp contrast to any other clustering agents reported. This also revealed a key new insight into biology, as it suggests that if you cluster receptors quickly enough, while constraining the membrane in 2D, you can inhibit their uptake by the cell. This unprecedented property of our polymer is poised to have major applications, both in fundamental and applied research. For instance, it will offer a completely orthogonal way to probe the molecular mechanisms of receptor endocytosis, and/or it will pave the way towards a novel generation of therapeutic antibodies that are resistant to endocytosis.

We cannot stress enough how HFSP was key to the success of this project. Indeed, we (Emmanuel Derivery and Ariel Ben-Sasson) met for the first time at the HFSP Awardees Meeting in Lisbon. After this, we interacted intensely, and we then met again in person at the HFSP meeting in Japan, in which Joseph Watson (PhD student in the Derivery lab on the HFSP Career Development Award project) also participated. The CDA funding to the Derivery lab also enabled the purchase of components required to build the fast microscope needed to follow assembly of this new material in vitro and on cells. We are now working on a follow up story where we will use this material to reconstitute polarity in unpolarized cells (which was the goal of the CDA project of Emmanuel Derivery). Importantly, this initiated a strong collaboration between the Derivery and the Baker labs, which now goes way beyond this project. Indeed, a revelation of this work was what can be gained when protein design and cell biology synergize: synthetic biology not to do something new, but to address a fundamental question of cell biology in an orthogonal way. So it’s very clear that HFSP has had a major impact on our science for years to come.

Link to article in Nature