Home / News & Events / Getting off the train – how a molecular motor and signaling lipids distribute, deposit and activate proteins

Getting off the train – how a molecular motor and signaling lipids distribute, deposit and activate proteins

Neurons are highly polarized cells with one long axon and several highly branched dendrites. How this complex morphology is established from a symmetric precursor cell is not clear.

The differentiation of cells commonly relies on well-controlled signaling pathways that are able to generate dynamic protein patterns, which in turn control the morphogenesis of cells into different shapes. These signaling pathways include many different components of the cell: the cytoskeleton, molecular motors, signaling molecules such as small GTPases and kinases. How these cellular components are connected to each other to create spatiotemporal information is often not well known and an area of intense research. 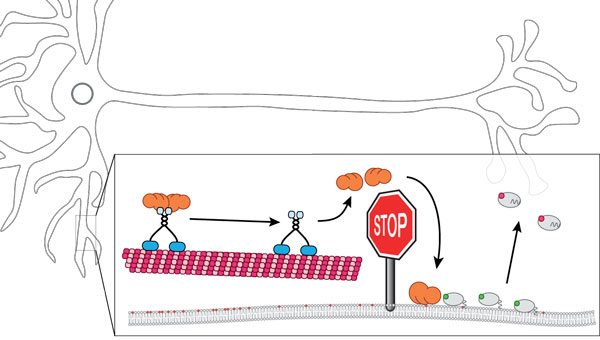 Figure: ADAP1 has long been considered to be an adaptor for PIP3 transport, contributing to neuronal polarity. Using an in vitro reconstitution approach we found that PIPs are actually release factors that displace ADAP1 from the motor such that it can activate the Arf6 GTPase activity and its release from the membrane.

In this project, we studied the properties of a protein called ADAP1, which was known to control the branching of dendrites in the developing neuron. The literature on this protein was puzzling, as it was known to be involved in the transport and polarized distribution of the signaling lipid PIP3, while its molecular architecture suggested that ADAP1 also acts on the small GTPAse Arf6, an important signaling protein that controls cell morphology and membrane trafficking. How these two different functions could be coordinated and how the cell might regulate their activities was not clear.

To better understand the role of ADAP1 in neuronal polarity, we decided to rebuild its functions in a test tube in vitro. Using purified components, we first set out to reconstitute the transport of PIP3 vesicles by ADAP1 and the motor protein KIF13B. To our surprise, we could not find any transport of vesicles along microtubules in our microscopy experiments. Instead, we discovered that the addition of PIP3 as well PI(3,4)P2 led to the rapid release of ADAP1 from the motor, which is incompatible with vesicle transport. Accordingly, we found that phosphoinositides are not the cargo of an ADAP1-KIF13B complex, instead they terminate cargo transport!

If ADAP1 does not act as an adaptor for vesicle transport, how could it contribute to the neuronal polarity? To answer this question, we decided to test for the ability of ADAP1 to activate GTP hydrolysis by Arf6. We found that ADAP1 indeed acts as a GAP on Arf6, but only when bound to a membrane containing phosphoinositides!

Based on our findings, we were able to propose a new mechanism for how ADAP1 contributes to neuronal differentiation. At low PIP3 concentrations, ADAP1 forms a stable complex with the motor protein and is transported along the microtubule towards dendrites. At high PIP3 concentrations, ADAP1 is trapped on the membrane surface, where it stimulates GTP hydrolysis by Arf6 to promote dendrite branching. Accordingly, the signaling lipid PIP3 acts as a stop signal that makes ADAP1 get off the train and activate branch formation.

My group had long been working on the in vitro reconstitution of the bacterial cell division machinery, therefore studying the mechanism of neuronal polarization and small GTPase regulation was a risky departure from our main expertise. The idea and motivation for this project was the result of an HFSP Young Investigator Grant awarded to Timothy Saunders, Ivo Telley, Sebastian Maurer and me in 2016. The financial and scientific support throughout this time played an important role in the success of the project, just as much as the spirit of the HFSP community that encourages the exploration of new ideas. This grant also initiated a close collaboration between our group and Timothy, which resulted in another publication on the regulation of small GTPases (Bezeljak et al, 2020). Accordingly, the support of HFSP has made it possible to go beyond our initial research focus and to shape our future research for years to come.