Home / News & Events / How does TRPV1 sense natural products as a polymodal nociceptor?

How does TRPV1 sense natural products as a polymodal nociceptor?

TRPV1 is an important target for long-term analgesia as a non-selective cationic channel, especially in the case of cancer patients with chronic intractable pain, and its polymodal nature provides the opportunity to design modality-specific drugs. However, most of the drug candidates targeting TRPV1 have failed in clinical trials because of undesirable side effects, primarily hyperthermia. To understand molecular and biophysical mechanisms contributing to protective and persistent pain, particularly in the setting of tissue injury and inflammation, we have employed the revolutionary technique cryo-electron microscopy (cryo-EM) to individually characterize the transitional processes of TRPV1 in response to varied stimuli including spider toxin DkTx, vanilloid agonist RTX and protons.

The transient receptor potential vanilloid type 1 (TRPV1) is capable of integrating the exogenous stimulations by capsaicin, resiniferatoxin (RTX) and spider toxin (DkTx). The actions of pro-algesic agents, such as extracellular protons, enhance TRPV1’s sensitivity to heat and promote pain hypersensitivity. TRPV1 also enjoys the richest pharmacology. We exploit and showcase the power of cryo-EM for visualizing distinct conformational states that together represent the functional lifecycle of a protein complex. 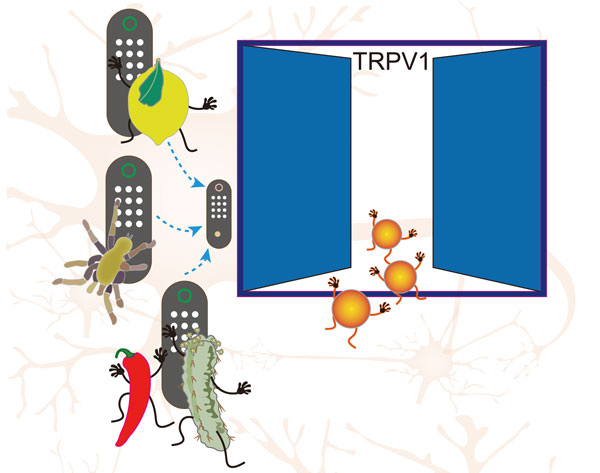 Based on our results, proton or DkTx action at extracellular-facing sites promotes subtle or incremental, but consequential rigid body movements in the peripheral voltage sensor-like domains that prime or drive the lower gate for opening. Conversely, vanilloid agonists (e.g. capsaicin and RTX) exert their primary actions at the lower gate, but these actions also propagate subtle effects to the upper restriction. Together, these findings provide a structural basis for understanding how TRPV1 integrates signals that act at distinct extracellular and intracellular sites – a property that underlies the contribution of this channel to inflammatory pain.

We have captured a series of substates that allows us to visualize the competition between spicy agonists and resident phosphoinositide lipids in detail, revealing specific states and stoichiometry that define this critical transition, which is relevant to other TRP channel family members that share a similar regulatory site. More generally, this analysis demonstrated how cryo-EM can now be used as a powerful approach for elucidating pharmacological parameters of ligand-receptor interaction, even in cases involving low affinity or transient interactions that are challenging to measure using more traditional methods.

Local tissue acidosis is a hallmark of inflammation that drives pain hypersensitivity. Key residues on TRPV1 that confer proton sensitivity have been identified. By capturing structures over a range of pH conditions, we now map conformational transitions that reveal how sequential protonation of key glutamate residues (E600 and E648) facilitates movement of elements within the outer pore region and voltage sensor-like domain that promote the channel’s open state.

We also visualize a series of states in which NMDG, a large organic cation, enters the pore in line with permeating sodium ions. These states correspond to the widest observed diameter of the upper restriction, demonstrating that some form of pore dilation does occur at the structural level.

Beyond TRPV1, our findings are of general relevance to other members of the extended TRP channels, several of which are also regulated by multiple, diverse stimuli and are permeable to a range of cations. Methodologically, our study demonstrates a new frontier of using single particle cryo-EM to study channel structure, that is to visualize conformational transition to uncover the dynamic process of ligand action. Our findings will appeal to different fields including sensory physiology, pain, and analgesia, ion channel biophysics, and structural biology.