Home / News & Events / How the zebra(fish) got its stripes

How the zebra(fish) got its stripes

The zebrafish skin’s alternating pattern of blue stripes and yellow interstripes depends on light-reflecting cells called iridophores. Here, we present a novel model in which zebrafish skin patterning arises from iridophores in the two stripe zones having different crystal structures with distinct light-reflecting and responsive properties. Emergence of the stripe- and interstripe- iridophores occurs by in situ differentiation of precursor iridophore cells, triggered by differential signals from the two skin zone environments.

Colour patterns are ubiquitous in nature, and play an important role in camouflage, social behaviour and protection from ultraviolet irradiation. Organisms create a remarkably diverse repertoire of colour patterns by using either pigmentation or structural colours (interaction of light with structured materials), or by a combination of the two. The alternating blue stripe and yellow interstripe pattern of adult zebrafish (Danio rerio) is a leading model system for vertebrate colour pattern formation (Fig. a). The cells within the blue stripes include black pigment-containing melanophores; cells in the yellow interstripes include orange pigment-containing xanthophores; and both blue stripe and yellow interstripes contain specialized light-reflecting cells called iridophores (Fig. a). The previous model for the iridophore’s role in the zebrafish skin colour formation links pattern establishment and reiteration to changes in iridophore morphology (cuboidal vs stella), proliferation, and migration[1-3]. 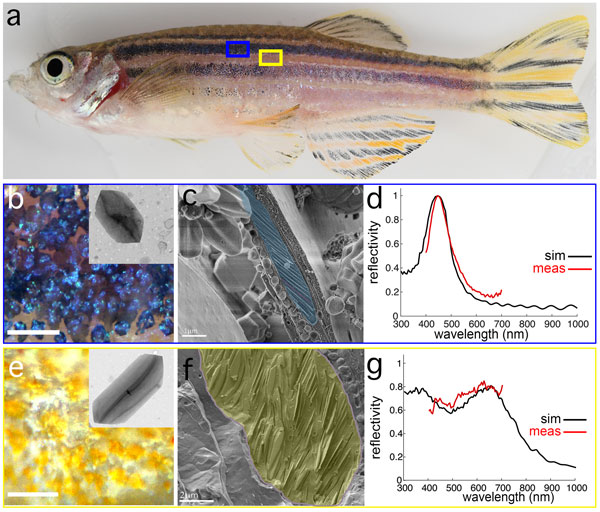 A key prediction of the above model is that some iridophores from the yellow stripe transform and migrate out to adopt a new stella morphology and arrangement. In testing this prediction, using time lapse fluorescence imaging, we found that individual iridophores did not migrate out from the yellow interstripe to the blue stripe. Instead, iridophores assumed a particular morphology at the time of their differentiation according to the presence or absence of a different pigment cell, melanophores, and this morphology remained fixed thereafter. We used a combination of cryogenic scanning electron microscopy and synchrotron-based in situ micro-X-ray diffraction to determine the intracellular architecture of the iridophores. We found that iridophores originating from different regions, exhibited distinct organisations of guanine-reflecting platelets; iridophores from the stripe had smaller reflecting crystal platelets that were uniformly stacked and oriented (Fig. b-d), whereas those from the interstripe had larger crystal platelets that were disordered (Fig. e-g). The colours of these cells differed as well: iridophores in the stripes were blue (Fig. d) and iridophores in the interstripes were silvery-yellowish (Fig. g). Importantly, these differences were autonomous properties of the cells, not a consequence of pigments contained in other pigment cells with which iridophores associate.

While light-reflecting iridophores were identified many years ago, how their intracellular crystals differ in structural organisation and control pathways to enable diverse optical functionalities has remained enigmatic. Our findings have helped clarify this conundrum. Our structural analysis of crystals from stripe and interstripe iridophores revealed significant differences in crystal architecture that likely underlie the distinct light-reflecting characteristics of the cells. In addition, differentially expressed genes in stripe and interstripe iridophores observed by single cell RNA-sequencing suggested the two iridophore types had divergent functional properties. Indeed, we found differences in each iridophore type’s physiological responsiveness to stress (mediated by norepinephrine), which correlated with different expression patterns of receptors for norepinephrine (i.e., beta-androgenic receptors). Variances in pathways related to the cytoskeleton were also seen between stripe and interstripe iridophores (including those related to the assembly and activity of actin, intermediate filaments, and microtubules), which could impact crystal architecture and responsiveness.

The support of the HFSP fellowship was essential to the success of this project as it enabled me to change my research focus from working on the chemical and optical aspects of structural colours to cell and molecular biology aspects of this phenomenon. The flexibility of the fellowship also allowed me to form fruitful collaborations, whose interdisciplinary sets of tools and approaches were critical to the success of this project.