Home / News & Events / Lunch with the “Mother of HFSPO”

Lunch with the “Mother of HFSPO” 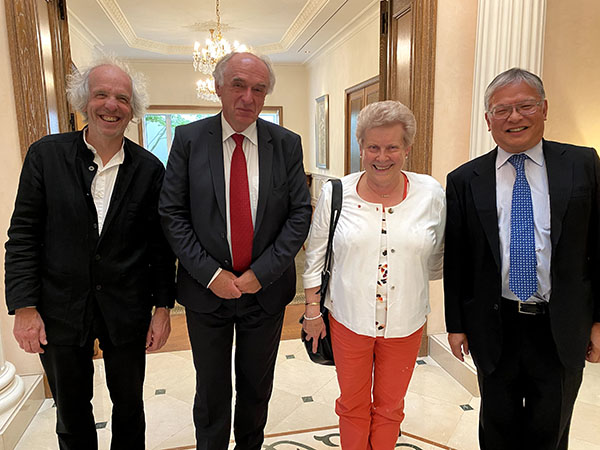 On 9th September, Secretary-General Professor Pavel Kabat, accompanied by Deputy Secretary-General Masami Watanabe, participated in a lunch meeting hosted by His Excellency Mr. Takeshi Akamatsu, Consul General of Japan, Strasbourg. They were joined by the “Mother of HFSPO”, Mme Catherine Trautmann, former Mayor of Strasbourg at the time when the HFSPO Secretariat was established in Strasbourg, and the former Minister of Culture and Communication in the French government. Also present was the former President of the University of Strasbourg, Professor Alain Beretz, a long-time supporter of HFSP and of HFSP engagements in the host city and in the region.  Professor Kabat learned from Mme Trautmann about the very beginnings of the Program and how the City of Strasbourg came to host HFSPO in 1989. They also engaged in a very fruitful discussion on the past 30-years and the future possibilities of HFSPO in the region, in France and globally.