Weber’s law is the most firmly established rule of psychophysics — the science that relates the strength of physical stimuli to the sensations of the mind. Despite being almost 200 years old, no clear way has been found to select among its many proposed explanations. Now, scientists have discovered a new psychophysical rule that allowed them to identify a unique and robust explanation of Weber’s law.

For centuries, the mental world of the mind and the physical world were treated as utterly distinct. While the movement of inanimate objects could be measured and ultimately predicted with the help of mathematics, the movement of organisms – their behavior – appeared to be shaped by different forces, under the control of the will. 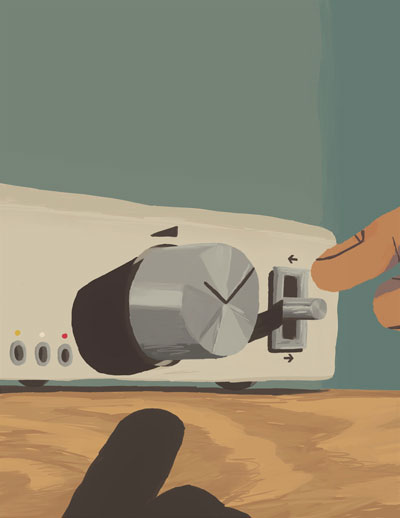 About 200 years ago, the German physician Ernst Heinrich Weber made a seemingly innocuous observation which led to the birth of the discipline of psychophysics – the science relating physical stimuli in the world and the sensations they evoke in the mind of a subject. Weber asked subjects to say which of two slightly different weights was heavier. From these experiments, he discovered that the probability that a subject will make the right choice only depends on the ratio between the weights.

For instance, if a subject is correct 75% of the time when comparing a weight of 1 Kg and a weight of 1.1 Kg, then they will also be correct 75% of the time when comparing two weights of 2 and 2.2 Kg – or, in general, any pair of weights where one is 10% heavier than the other. This simple but precise rule opened the door to the quantification of behavior in terms of mathematical ‘laws’.

Weber’s observations have since been generalized to all sensory modalities across many animal species, leading to what is now known as Weber’s Law. It is the oldest and most firmly established law in psychophysics. Psychophysical laws describe precise rules of perception and are important because they can be used to obtain mathematical explanations of behavior in terms of brain processes, just like the precise patterns of movement of the planets in the sky were useful to understand gravitation.

Many explanations for Weber’s law have been proposed throughout the years. Although they can all account for Weber’s findings, no experimental test had been found to identify which model was correct. Thus, the puzzle of a mathematical explanation of Weber’s law remained open.

Now, a team of researchers at the Champalimaud Centre for the Unknown in Lisbon, Portugal, has discovered that Weber’s Law can be described as the consequence of a new psychophysical rule involving the time that it takes to make a choice, not just the outcome of the decision. The team has shown that this new rule is sufficient to derive a unique and accurate mathematical model describing the cognitive process underlying Weber’s Law. Their results are described in an article published in the scientific journal Nature Neuroscience.

Time is key
In this new study, Alfonso Renart, the principal investigator that led the study, and his team, trained rats to discriminate between two sounds of slightly different intensities. They constructed miniscule headphones, specially adapted to the head of rats, and used them to deliver sounds simultaneously to both ears.

In each trial, the sound on one of the two speakers would be slightly louder, and the rat’s job was to report which speaker played the louder sound by orienting towards the corresponding side. “This behavior is natural to rats, because they orient their heads towards the source of a sound, just like we do,” explains José Pardo-Vazquez, one of the article’s co-authors. The rats could experience the sound as long as they needed in order to make up their mind. Thus, every attempt provided a choice, and a decision time.

“Our experiments confirmed that the animals’ behavior matched Weber’s Law,” says Pardo-Vazquez. “Their ability to tell which of the two sounds was louder only depended on the ratio between the sounds’ intensities. If the rat had to compare the intensities of two sounds that were played softly, its accuracy was just as good as with a pair of sounds that were played loudly, as long as both pairs had the same intensity ratio.”

Then, the team started to analyze in detail how long the rats took to make their decisions, a step that turned out to be critical. “Typically, studies of Weber’s law focused on the accuracy of the discrimination, which is what Weber himself described,” Pardo-Vazquez explains. “Surprisingly, the time taken to decide has received little attention.” The team realized decision times and the loudness of the pair of sounds were linked – the louder the sounds, the shorter the decision time. In fact, they showed that the nature of this link was unique and mathematically precise, making the decision times observed, for instance, in a discrimination between two quiet sounds, exactly proportional to the decision times measured when the subject discriminated between two loud sounds — as long as their relative intensities were constant.

Beyond weber’s law
The team had, in fact, discovered a new “psychophysical law”, which they referred to as ‘Time-Intensity Equivalence in Discrimination’ (TIED), because it linked the overall intensity of a pair of sounds and the time it took to discriminate between them. The TIED is more stringent than Weber’s Law, because it not only links the accuracy of pairs of discriminations, it also links their associated decision times. “The precision of this relationship between the decision times in our experiments is amazing,” says Pardo-Vazquez, “it is unusual that the behavior of animals can be described with such mathematical precision.”

To investigate if the TIED held also in different conditions, the team ran the same kind of experiment with human subjects, obtaining similar results. They also analyzed experiments done by others in which rats perform olfactory discriminations of odor mixtures, again with the same outcome. “It is still early to say if the TIED is as general as Weber’s law, but the fact that we obtained the same results in two species and across two sensory modalities is an encouraging first step,” Pardo-Vazquez concluded.

Closing in on the right model
Dozens of mathematical models have been proposed through the years to explain Weber’s law, but there was no clear experimental test to distinguish them. The researchers reasoned that the TIED offered a way forward. Their analysis revealed that in order to be consistent with the TIED, a mathematical model of the discrimination task would need to satisfy a set of strict conditions.  “This was fantastic,” says Juan Castiñeiras, another co-author of the study. “The TIED constrained the world of possible explanations, and thereby resolved the ambiguity between the many proposed models of Weber’s law.” A previously proposed model by the psychologist Stephen Link at the end of the 80s came close to the solution, but missed an important condition describing how the intensity of sensory stimuli is encoded by the activity of sensory neurons.

The final step was to take this set of conditions, and construct a model to test how accurately it accounted for the behavior of the rats. “We analyzed the simplest model with the fewest possible number of parameters,” explains Castiñeiras. When the values of these parameters were chosen to maximize the similarity to the behavior of the rats, they discovered that the fit of the model was remarkable. “Even the simplest model effectively captured everything we could measure with almost no error. This greatly strengthened our confidence that the model describes something true about how perception works,” says Renart.

Precise experiments and theories lead to definite progress
These results stand out in their field because of the precision of both the new psychophysical rule and of the mathematical model that describes the experimental data. “Although less frequently observed, in biology and in the study of behavior — like in physics — precise experimental results permit precise explanations which resolve previous ambiguities and therefore constitute progress,” says Renart. For instance, their results suggest that one of the main theories in psychophysics was not adequate to describe the TIED. “Producing mathematical explanations that rule out competing theories is very rare in neuroscience, because there is always the possibility to slightly modify one model to make it compatible with the experimental data,” Castiñeiras points out. “We showed that a very influential theory in psychophysics (called Signal Detection Theory) did not model decision times and could therefore not describe the TIED. It missed the essence of the explanation of Weber’s law.”

One of the next goals of the team is to understand how the mathematical model they have identified is implemented by the brain: “We want to determine which brain areas are important in our task, and how neurons in these circuits carry out the different computational elements of the model,” Renart concludes.