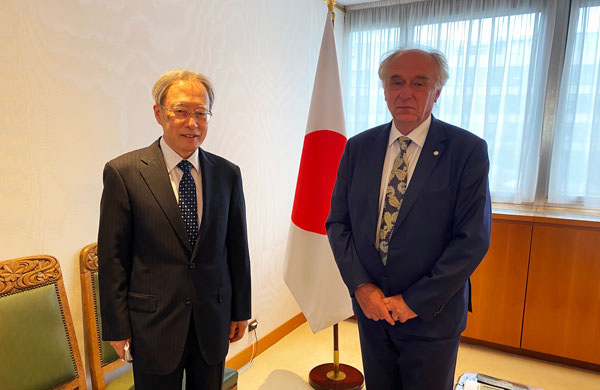 On 30th August, Secretary-General Professor Pavel Kabat, accompanied by Deputy Secretary-General Masami Watanabe, visited His Excellency Mr. Junichi Ihara, the Ambassador of Japan to France. Professor Kabat introduced himself and HFSP’s many accomplishments, expressing his deep appreciation and thanking Japan for their continued leadership and support of HFSP. The Ambassador replied that Japan is proud of supporting HFSP for more than 30 years. He acknowledged the clear-sighted vision of former Prime Minister of Japan, Mr. Nakasone, upon whose initiative HFSP was founded, adding that he was one of the most extraordinary politicians he ever knew.

Professor Kabat informed the Ambassador of his intention to visit Japan at the earliest opportunity to meet with high level governmental and academic officials and other HFSP stakeholders. Unfortunately, the visit intended for October had to be postponed because of the continuing COVID-19 related travel restrictions. Ambassador Ihara kindly offered his support and assistance in governmental preparations for the visit.

Professor Kabat asked for the Ambassador’s suggestions and advice with regards to science diplomacy, which will require an increased level of engagement and involvement with the Foreign Ministry of Japan as well as diplomatic missions by Japan in other HFSP Member states. HFSP, having been conceived as an organisation to support and spearhead cutting-edge, frontier life science without borders, is very well placed for making important contributions to science diplomacy and science for peace efforts.

Professor Kabat also introduced his ideas and plans for revitalising HFSP, to increase the number of member countries, and new implementation forms and modalities in the future. These will be developed further in close collaboration with the Japanese Government and with HFSP Trustees, and revisited with the Ambassador for further discussion.