The majority of arthropods live in strict symbiotic relationships with bacteria that provide them with nutrients or defense mechanisms, some of them even living within host cells. The intramitochondrial bacterium Midichloria mitochondrii is probably one of the most intriguing endosymbiotic bacteria ever detected: it is the only known bacterium able to colonize the mitochondria of its host. At the state of the art, little information is available about the lifecycle of this unique symbiont. Combining mathematical modelling and electron microscopy, we reconstructed the probable lifecycle of the bacterium within the host cells, which appears to include the capability to move from one mitochondrion to another.

The life and physiology of several arthropod species is strictly connected to symbiotic bacteria, microorganisms able to colonize different parts of the host's body and to deeply affect its physiology. In some cases, endosymbiotic bacteria are pivotal to the host's fitness and survival, providing nutrients, protecting it from pathogens or conferring resistance to insecticides. Some bacterial species are even able to manipulate the reproduction of the host, e.g., by inducing parthenogenesis. 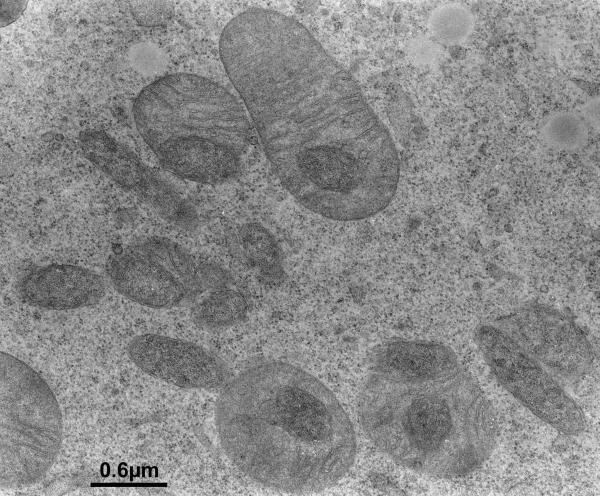 Figure: transmission electron microscopy image of an oocyte of the tick Ixodes ricinus. Mitochondria can be seen in grey with the characteristic cristae, while Midichloria bacteria are the darker cells.

Until now, tens of endosymbiotic bacterial species have been described, often characterized by peculiar lifestyles and symbiotic strategies. Among these, Midichloria mitochondrii is one of the most intriguing: indeed, it is the first described bacteria able to colonize its host’s mitochondria, the organelles known for energy production but fundamental for many other cell functions.

Understanding the mechanisms at the basis of this interaction could provide novel clues on the functioning of mitochondria.

Furthermore, the host of M. mitochondrii is Ixodes ricinus, the predominant tick in Europe and vector of important pathogens that cause a variety of diseases, including Lyme borreliosis and typhus. Understanding the role of Midichloria and its influence on the host physiology could lead to novel strategies to fight this important pathogen vector.

In order to investigate the role of M. mitochondrii we need to describe the lifecycle of this bacterium in the host and to understand its colonization of the mitochondria in the host oocytes. Due to the impossibility to grow it in cell culture, it is not possible to directly observe the lifecycle of M. mitochondrii within a single oocyte: we can only take shots of frozen moments using transmission electron microscopy. The first images acquired by Sacchi and colleagues in 2004, showed that an important portion of the hundreds of mitochondria present in the cells were colonized, and that a colonized mitochondrion can harbour one or more bacteria. This evidence suggested that the bacterium could be able to invade the mitochondrion and replicate within it. Moreover, few mitochondria appeared degraded, suggesting a lifecycle similar to that of predatory bacteria or viruses.