Plants possess a high regenerative potential that allows them to regenerate new tissues or organs upon damage or perception of different inductive stimuli. This innate regenerative capacity of plants is the fundamental basis for various horticultural and biotechnological procedures, including grafting, clonal propagation, regeneration from haploid cells, and the production of transgenic plants.

However, many important crops remain recalcitrant to the regeneration processes and the methodologies for determining the correct conditions for regeneration are highly empirical. Because of this, high efficiency regeneration of plants remains one of the major bottlenecks facing modern biotechnology. As a remarkable example, the absence of efficient plant regeneration methods in many crop species has limited the application of the revolutionary technology of genome editing to agriculture. Today, it is relatively simple to edit the genome of a single plant cell, the challenge is to regenerate a full plant from that cell. Therefore, there remains a need for new methods which provide efficient transformation and regeneration, increase ease of use, and are suitable for a broader range of recalcitrant species and genotypes. 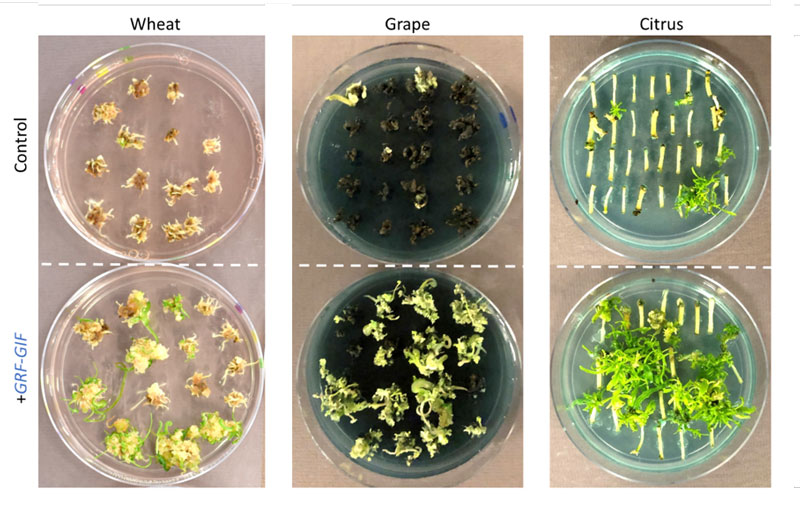 Over several years, different strategies to enhance the regenerative capacity of plants have been developed through extensive experimental work. The capacity to regenerate whole individual plants from small tissues or single cells in vitro was initially observed early in the 20th century. Since then, tissue culture techniques have been developed and optimized to allow efficient regeneration for a variety of crops. A breakthrough in tissue culture techniques was the discovery that the regenerative capacity of plants can be enhanced by exogenously supplied plant hormones auxin and cytokinin, whose balance also determines the fate of regenerating tissue.

More recently, significant progress in plant regeneration research has identified different molecular mechanisms that promote plant cell fate reprogramming and activation of specific developmental programs. That knowledge has provided exciting molecular tools to increase plant regeneration efficiency in recalcitrant crops. Some studies have tested non-plant growth-stimulating transgenes, whereas others have tested plant morphogenic genes including LEAFY COTYLEDON1, LEAFY COTYLEDON2, WOUND-INDUCED DEDIFFERENTIATION1 (WIND1), SHOOT MERISTEMLESS (STM), WUSCHEL, BABY BOOM (BBM) or combinations of them. These strategies have been successful to reprogram somatic cells and promote the generation of somatic embryos or regeneration of shoots on various plant tissues when overexpressed. However, continued expression of those morphogenetic genes in the transgenic plants resulted in severe developmental defects and sterility. Therefore, plant regeneration using those technologies requires transient expression approaches or the removal of the expression cassettes, which has limited their application to a few labs and crops.

In our work, we described a new method that overcomes some of the limitations of transformation technologies seen with other morphogenic genes. We discovered that expression of a sequence encoding a chimeric protein including a GROWTH-REGULATING FACTOR (GRF) transcription factor and its GRF-INTERACTING FACTOR (GIF) cofactor dramatically increases regeneration efficiency in both monocotyledonous and dicotyledonous species, expands the number cultivars amenable to transformation and results in fertile transgenic plants.

The GRF genes belong to a plant-specific family of transcription factors (TFs) that is highly conserved in land plants, and has been identified in dicots, monocots, gymnosperms and mosses. These genes are also conserved targets of the microRNA miR396, which reduces GRFs’ activity in mature tissues. GRFs act as promoters of growth by increasing cell proliferation in developing organs. The GRF proteins form complexes and work together with proteins encoded by members of the GIF gene family. GIF proteins do not have a DNA binding domain, but it has been demonstrated that GIF proteins interact with GRFs and with chromatin remodeling complexes in vivo, and that they can promote organ growth per se and can boost the activity of GRFs. 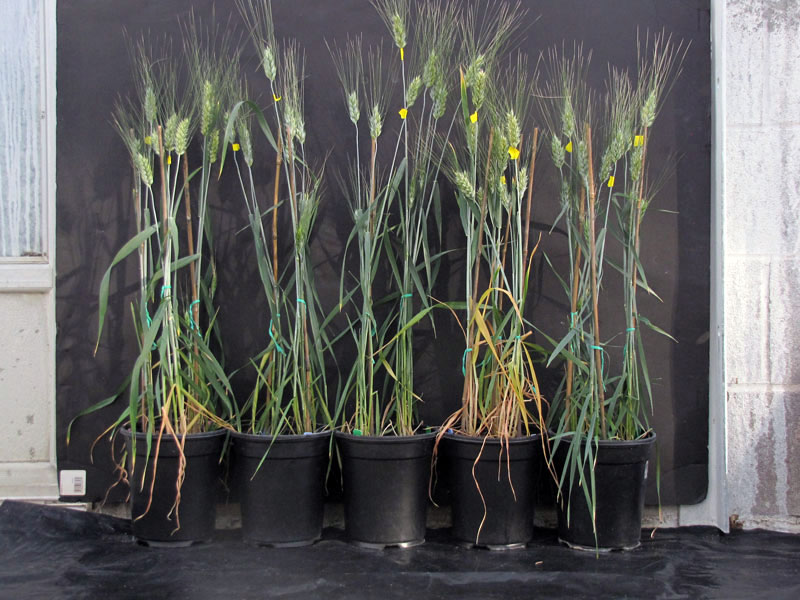 Figure 2: the plant on the left is wild type and the other four pots contain GRF-GIF plants.

Multiple levels of regulation control the efficiency of the assembly of functional GRF/GIF complexes in vivo. Therefore, in this work, we decided to evaluate the effect of expressing GRF and GIF as a chimeric protein in a single polypeptide. We observed that expression of that chimeric protein dramatically increases regeneration efficiency of wheat, and importantly resulted in fertile transgenic plants, likely due to the activity of miR396 in mature tissues. We also showed that the expression of GRF and GIF as a chimera was more efficient than expressing both proteins individually, which indicated that the forced proximity of the two proteins in the chimera likely increases the effective concentration of GRF/GIF complexes inside the cell.

We then expanded the work to other cultivars and observed increased regeneration efficiency in diverse recalcitrant wheat cultivars, as well as triticale and the model rice cultivar Kitaake. Moreover, the use of GRF-GIF also enabled the transformation protocols to be accelerated and, in the case of wheat, the time required to obtain transformed plants to be reduced by more than 50 days.

We also tested the effectiveness of the GRF-GIF chimera in several dicotyledonous species and observed significant increases in regeneration frequencies in citrus (reported in the Nature Biotechnology paper), pepper and grape (unpublished results).

Finally, we thought that GRF-GIF was ideal to combine with genome editing, since both the CRISPR-Cas9 and GRF-GIF sequences can be segregated out together after editing the desired region of the genome. We showed that by combining GRF-GIF and CRISPR-Cas9 technologies into a single vector, we could generate large numbers of edited wheat plants in multiple commercial backgrounds. This has been a transformative change in Dr. Dubcovsky laboratory because we are now able to produce hundreds of edited wheat plants with altered genes critical for flowering and development. Moreover, applications such as forward CRISPR screenings are now a real possibility for wheat research.

We have distributed our vectors to more than 40 labs around the world and companies are starting to test the technology. We believe that the GRF-GIF technology will have a positive effect in research and variety development in many other crop species. This is supported by the simplicity of the GRF-GIF technology, the high conservation of the GRF and GIF proteins across the plant kingdom and the improved regeneration efficiency observed in our rice, citrus, grape and pepper experiments.

Besides all these technological implications, an important basic question remains: how do GRF/GIF complexes promote regeneration? Although no previous publications reported a role of GRF or GIF genes on plant regeneration, the striking phenotypes obtained with GRF-GIF indicate that understanding this mechanism will be central to advancing our knowledge of the regeneration pathways. We hypothesize that the increased regeneration efficiency of the GRF-GIF chimera might be associated with the ability of the GRF/GIF complex to regulate the transition between stem cells to transit-amplifying cells. We speculate that there is potential to combine GRF-GIF with other key regeneration regulators acting at earlier stages of cell reprograming and having synergistic effects in the regeneration efficiency of recalcitrant genotypes.

Finally, I would like to thank HFSP for its support, which has been essential for the development of this technology. The transition I made from Arabidopsis to wheat was very important. We originally designed and tested the GRF-GIF construction in Arabidopsis in the laboratory of Javier Palatnik in Argentina. Later, it was through a fruitful collaboration between the labs of Jorge Dubcovsky and David Tricoli (UC Davis Plant Transformation Facility), that enabled the development of this innovative technology in wheat that we are currently extending to other crops.

Link to article in Nature Biotechnology