Ionotropic Receptors are a diverse family of sensory receptors of environmental odors, tastants, humidity and temperature, formed by complexes of stimulus-specific receptor subunits and an obligate co-receptor of unclear function. New work identifies a sugar-modified protein sequence in the co-receptor “ligand-binding domain” that is required for the localization of the complexes in sensory neurons.

Ionotropic Receptors (IRs) are a large, divergent family of invertebrate ligand-gated ion channels, which are distantly related to ionotropic glutamate receptors. While ionotropic glutamate receptors have well-established roles in mediating communication between neurons at synapses throughout the nervous system, IRs function in peripheral sensory neurons to mediate detection of myriad environmental stimuli, including volatile and non-volatile chemicals, humidity and temperature. IRs are thought to assemble into heteromeric complexes containing a “tuning” IR subunit, which detects a specific sensory cue, and an obligate “co-receptor” subunit. Both tuning and co-receptor IRs contain an extracellular ligand-binding domain that, as in ionotropic glutamate receptors, is predicted to form a Venus flytrap-like structure. Through an HFSP-funded project between neurobiologists and structural biochemists, we aimed to understand the form and function of the IR ligand-binding domain to appreciate how this family can fulfill its diverse sensory roles. 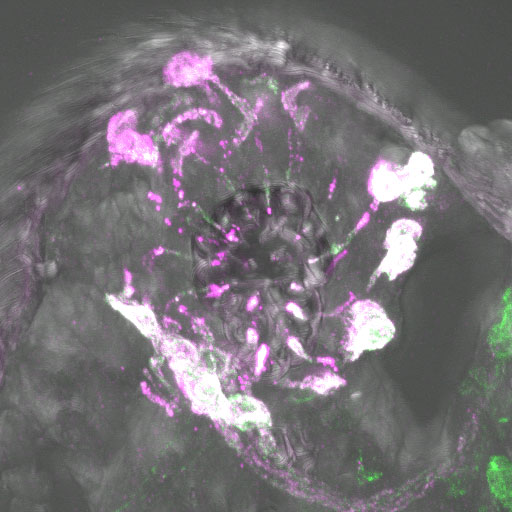 In this study, we characterized the ligand-binding domain of the co-receptor IR8a, whose function was unclear, given that it is unlikely to recognize specific ligands in the many classes of sensory neurons in which it is expressed. Protein sequence alignment revealed an unusual structural feature of the IR8a ligand-binding domain that is not found in other IRs or ionotropic glutamate receptors. Notably, this sequence – baptized the “co-receptor extra loop” (CREL) – is modified by N-glycosylation at a highly conserved site.

Using the Drosophila olfactory system as a model to study the in vivo role of the CREL, we found that deletion of this sequence from IR8a or specific mutation of its N-glycosylation site completely or severely impairs the localization of the co-receptor, and so its partner tuning IRs, to the ciliated sensory endings of olfactory neurons. Unexpectedly, the localization of the IR8a CREL N-glycosylation mutant can be rescued by the presence of wild-type IR8a. This observation provides evidence that at least two IR8a subunits must be present in a heteromeric IR complex, and that this sugar modification has a specific role in receptor targeting rather than protein folding or complex assembly. Further analysis revealed that the mutant proteins are trapped within the endoplasmic reticulum. Finally, protein modeling and in situ analysis of tuning IR and co-receptor subunit interactions by a fluorescent protein fragment reconstitution assay indicated that the CREL N-glycosylation site is likely to be located on the external face of a heterotetrameric IR complex.

Together these results reveal an important role for the IR co-receptor ligand-binding domain in control of intracellular trafficking and provide novel insights into the stoichiometry and assembly of IR complexes. These results are likely to be relevant for the function of diverse IR complexes in olfaction and other sensory modalities in Drosophila and beyond.