From single-cell RNA expression to RNA composition in subcellular particles

From single-cell RNA expression to RNA composition in subcellular particles

The spatial organization of RNA molecules – where RNAs might be synthetized, processed or stored within cells – is mapped using a new high-throughput sequencing approach. We identify positional preferences for RNAs with respect to landmark structures, their association with phase separations and a heterogenous RNA density throughout the nucleus.

Single cells have been widely applied as the unit of measurement to investigate gene expression, or RNA abundance, and other biological readouts in complex cellular samples, tissues and whole organisms. More recently, spatial transcriptomics has aimed to map cells in space, or on a plane for tissue sections, based on spatial positioning of RNA expression signatures with near single-cell resolution. In contrast to zooming out and to contextualize cells in space in a tissue, decreasing further the unit of measurement from single cells to subcellular components promises insights into which RNAs are close to each other, i.e. how the transcriptome is spatially organized, and where RNA molecules reside within cells. 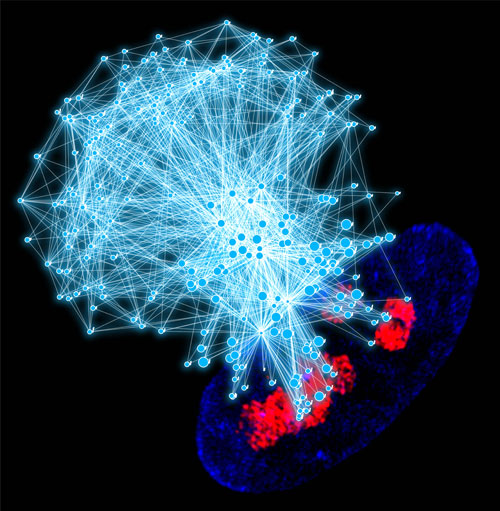 To do this we devised Proximity RNA-seq that employs billions of beads, previously conjugated with copies of a unique DNA barcode for each bead, to tag RNA contained within individual particles or structures from crosslinked and fragmented cell nuclei in water-in-emulsion droplets. RNA molecules from a single particle are tagged by the same unique DNA barcode through reverse transcription in droplets, which allows the reconstruction of RNA proximities after sequencing of cDNA libraries.

We identified RNAs in nuclear phase separations such as the nucleolus, speckles and paraspeckles. We then used the nucleolus as a landmark nuclear structure to position different transcripts closer or further apart from nucleoli based on RNA proximities with small nucleolar, and other nucleolus-resident RNAs. The distance prediction from sequencing data was found to be in excellent agreement with RNA-FISH.  Most surprisingly, Proximity RNA-seq combined with chromosome conformation capture, Hi-C, revealed that genomic regions of active transcription punctuate heterochromatin around nucleoli. Through a collaboration between the research group of Peter Fraser at the Babraham Institute in Cambridge, UK and Irene Farabella and Marc Marti-Renom from the CRG, Barcelona, Hi-C derived 3D models of a whole chromosome were generated and overlaid with an estimate of local RNA density. Proxies of local RNA densities were obtained by measuring the frequency of simultaneously detecting multiple co-localised RNAs for individual transcripts by Proximity RNA-seq. This analysis indicated that active chromatin around heterochromatin exhibit increased DNA as well as RNA density. We furthermore observed faster transcription upon locally increased nucleic acid density suggesting a different biochemical environment and altered transcription kinetics in active regions adjacent to perinucleolar heterochromatin.

HFSP generously supported the risky endeavour to develop a new technique, which now opens up alternative means to comprehensively study regulatory transcripts, RNA compositions of membrane-enclosed and membraneless organelles and their roles in the spatial organization of cells. In particular, our understanding of RNA-containing phase separations and their aggregated counterparts in disease, for example, in neurodegeneration or cancer, will benefit from data obtained by Proximity RNA-seq.