HFSPO is saddened by the news that Sir James Gowans passed away on 1st April at the age of 95. 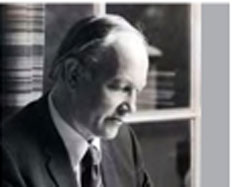 Sir James Gowans served as the first Secretary-General of HFSPO from 1989 to 1993, bringing a wealth of experience, both scientific and administrative, to the role. He was a renowned biomedical scientist and immunologist, who revealed the role of lymphocytes in the immune response and he had previously served as Secretary of the Medical Research Council of the UK.

It was under his leadership that the very first HFSP awards were successfully made in March 1990, shortly after his arrival at the Secretariat in Strasbourg. In an article that he wrote for the 20th anniversary book, Gowans recalls that “The first meetings of the Review Committees made a strong impression on me. It was remarkable how an international group of scientists (from the G7 countries), many of whom were unknown to each other, immediately started working in harmony together, without any preamble about how judgements should be made. It was a heartening example of internationalism in science.”

HFSP remains true to this vision and we are grateful to Sir James Gowans for his role in building the foundations of the Human Frontier Science Program, which remain as strong as ever as the Organization enters into its fourth decade.