Combining electronic and natural systems into bioelectronic hybrids has fascinated humans for centuries, with many imagined purposes both for the benefit of and detriment to mankind. HFSP funding empowered a multidisciplinary team to develop a range of bioelectronic sensors, most recently for methotrexate, a toxic chemotherapy drug requiring precise monitoring to avoid serious, life-threating side effects in cancer patients.

Our work on bioelectronic hybrids aims to transform a US$70 billion global diagnostic industry via new synthetic biology enabled biosensors that ‘switch on’ colour or electrical responses to drugs used in cancer, arthritis, and organ transplant treatments. This work is based on a modular approach to constructing small molecule biosensors – artificial proteins designed to capture biomarkers of choice and produce specific and sensitive responses. The research was carried out at the CSIRO-QUT Synthetic Biology Alliance (Australia), in collaboration with Clarkson University (USA) and Pathology Queensland (Australia), with primary funding provided by the Human Frontier Science Program (HFSP). 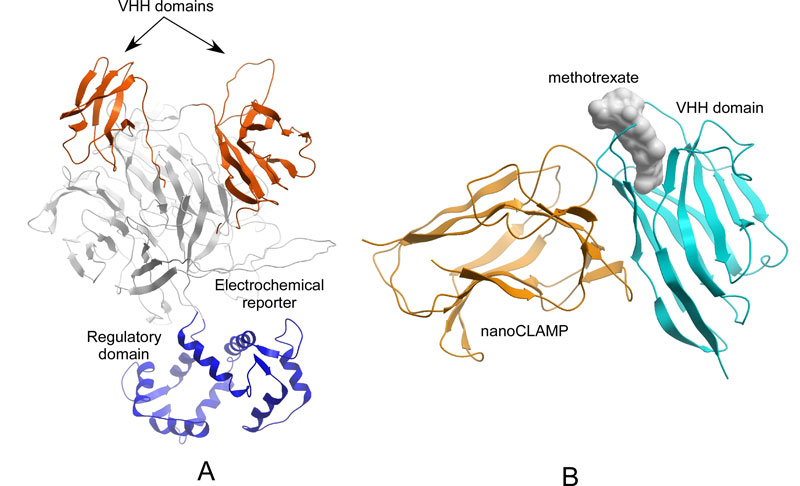 Figure: (A) A structural model of electrochemical biosensors of a-amylase based on circular permutated electrochemical enzyme glucose dehydrogenase. The model was generated using Alpha-Fold (B) Artificial methotrexate receptor system for based VHH and nanoCLAMP domains.

Over multiple collaborative projects, biosensors were developed and adapted to accurately measure protein biomarkers of stress such as a-amylase (Figure 1A). We also developed a range of small molecule biosensors, including those for the immunosuppressant drugs cyclosporine A, tacrolimus and rapamycin, along with the anticancer drug methotrexate, which requires close monitoring to reduce toxicity and organ damage. Such protein biosensors have the potential to expand patient care by enabling sophisticated tests on cheaper lab equipment and new portable point-of-care devices, allowing therapeutic drug monitoring on less sophisticated equipment than available in small, regional or remote labs and hospitals. Future tests may also require smaller biological samples, our team having proved that a biosensor could accurately measure cyclosporine A levels in one microlitre blood samples. The results of this study were published in a leading chemistry journal Angewandte Chemie [1].

Protein complexity and fragility makes construction and use of such protein biosensors difficult, but using a modular architecture helps alleviate the problem and could be adapted to potentially target any small molecule and not just to therapeutic drugs. Our protein biosensors default to ‘switched off’– like an electrical circuit with a missing piece. Only the targeted biochemical in human fluids like blood or saliva can complete the circuit and ’switch on’ a signal proportional to the amount of biomarker detected. When activated, the different protein biosensors produce either a change of colour for hue-based readings, or electrochemical current. The Clarkson team has also demonstrated the feasibility of multiplexing this technology to detect two different biomarkers at the same time.

Our most recent work focused on an approach for construction of artificial receptor molecules that endow biosensors with specificity. Using a directed evolution approach, we constructed a novel methotrexate sensor (Figure 1B). Methotrexate is a toxic drug used in anti-cancer chemotherapy, and its overdose has serious, life-threatening side effects. Thus, methotrexate analysis in biological fluids is important for keeping the drug at an optimal therapeutic concentration. This sensor has been recently published in Nature Communications – one of the top scientific journals (Impact Factor 14.92) [2]. The engineered biosensor enzyme was immobilized at an electrode surface and used for drug biosensing with extremely high sensitivity and specificity. In addition to the fundamental novelty of using the artificial signal-activated enzyme, the study opens future options for biomedical applications of the developed biosensor, and possibilities for other biosensing systems based on the same concept.

It should be noted that the success of this project was based on the collaboration of scientists with expertise in different areas: synthetic biology, synthetic organic chemistry, and bioelectrochemistry. This is an exemplary collaboration that serves as a model for performing multi-disciplinary research. While the artificial enzyme preparation was carried out by an Australian team led by Prof. Alexandrov, bioelectrochemical study of the developed biosensor was performed by Dr. Smutok at Clarkson University. Both the US and Australian teams are continuing their successful work combining synthetic biology and bioelectronics, and are expecting many more interesting and practically important results. We would also like to acknowledge the critical and continuous contributions of Dr. Artem Melman at Clarkson University, who passed away in November 2021.