Warm on a cold night: the neurological basis of behavioral thermoregulation

Thermoregulatory behavior is a basic motivated behavior for body temperature homeostasis. Despite its critical importance, identification of a forebrain region or defined neural population required for this function has yet to be established. HFSP Early Career grant holder Sung-Yon Kim and colleagues have found such a brain region and a specific neural population and revealed the information encoded by these neurons and the thermosensory input pathway.

It is critical for animals' survival to keep their internal temperature within a small range ideal for cellular and molecular processes. To maintain thermal homeostasis in the face of thermal stress, the brain triggers various autonomic and behavioral responses. Unlike stereotyped autonomic reactions, thermoregulatory behavior is a goal-directed, motivated behavior that can take many forms, including migrating to a warm location, building nests, or using operant responses to turn on a heat lamp. These behavioral strategies use less energy than autonomic processes, making them the preferred way of thermoregulation in animals. Although the neural mechanisms governing autonomic thermoregulation have received a lot of attention and much been elucidated, behavioral thermoregulation's counterparts are still poorly understood. Despite decades of research, no forebrain region, let alone a distinct neuronal population, has been identified as being essential for a wide range of thermoregulatory actions. 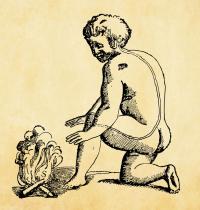 Figure: As a homage to Descartes’ classic drawing on the reflex arc of pain (from L’Homme, 1662), this drawing illustrates a young man approaching a campfire—a common thermoregulatory behavior in humans. The environmental temperature (indicated by “S” for stimulus) sensed in the periphery is transmitted via spinal afferents to the pontine parabrachial nucleus (indicated by “P”), which connects to the hypothalamus (indicated by “H”). HFSP Early Career grant holder Sung-Yon Kim and colleagues show that Vgat-expressing neurons in the lateral hypothalamus are critically involved in thermoregulatory behavior. These neurons are required for diverse thermoregulatory behaviors and encode bidirectionally thermal punishment and reward. These findings represent the first identification of a forebrain neural substrate required for behavioral thermoregulation. Artwork by Sung-Yon Kim.

Because thermoregulatory behavior is motivated, HFSP Early Career grant holder Sung-Yon Kim and colleagues hypothesized that the lateral hypothalamus (LH), which is a crucial structure for a variety of motivated behaviors, might be such an essential brain area. They further postulated that inhibitory neurons in the LH that express the Vgat gene (LHVgat neurons) might be the critical neural population, given several recent studies pointing at the crucial role of these neurons in various motivated behaviors. Both turned out to be the case, according to their research, which was partly supported by HFSP. They first found that LHVgat neurons are required for a variety of thermoregulatory behaviors, including migrating to thermoneutral places, building nests, changing body posture, and performing operant responses to turn on a heat lamp, using a chemogenetic method, a technique that allows the neural activity of a specific neuronal population to be manipulated. They next used two-photon calcium imaging, a cutting-edge approach for observing neuronal activity deep inside the brain, to visualize and assess the activity of individual LHVgat neurons. Interestingly, a subpopulation of LHVgat neurons was activated during a thermoregulatory action, and most of the neurons in this subpopulation also encoded value information from thermal stimuli. Specifically, these neurons were activated by unpleasant thermal stimuli (thermal punishment), such as hot thermal stimuli delivered at high ambient temperatures and inhibited by pleasant thermal stimuli (thermal reward), such as warm thermal stimulus provided at low ambient temperatures. Because motivated behaviors arise in two forms, seeking rewards and avoiding punishments, the encoding of thermal punishment and reward by LHVgat neurons may be critically involved in behavioral thermoregulation. Kim and colleagues further revealed that LHVgat neurons receive direct inputs from the lateral parabrachial nucleus (LPB), a hindbrain region that sends peripheral thermosensory information to forebrain locations, according to the researchers. They also discovered that the LPB-LH pathway is a crucial neuronal substrate for behavioral thermoregulation.

These investigations, taken together, shed fresh light on the brain circuit mechanism for behavioral thermoregulation, a basic physiological response that is fundamentally important for survival but whose neurobiological principle has eluded researchers. Apart from when the outside temperature is too hot or cold, thermoregulatory behaviors occur in various situations; for example, we warm up before bed and drink cold water to cool down after a workout. When sick, we desire a warm environment, whereas pregnant women want the reverse. This study paved the way to a comprehensive understanding of the neural process underlying those diverse thermoregulatory actions in various circumstances by establishing a neural population required for behavioral thermoregulation for the first time and revealing its encoding pattern of thermal stimuli.