Many bacteria produce toxins to kill competitors, but only if the population density is high. This allows them to effectively balance the tradeoff between aggressive competitiveness and rapid proliferation.

Bacteria live in microbial communities in which they compete with many other microbes for nutrients and space. In this competitive environment, almost all known bacterial strains produce toxins that impair or kill other bacteria. This chemical warfare is thought to be one of the major factors shaping microbial diversity. An interesting example is Streptococcus pneunomiae, which produces toxins that kill members of its own species in a process that is aptly called fratricide. 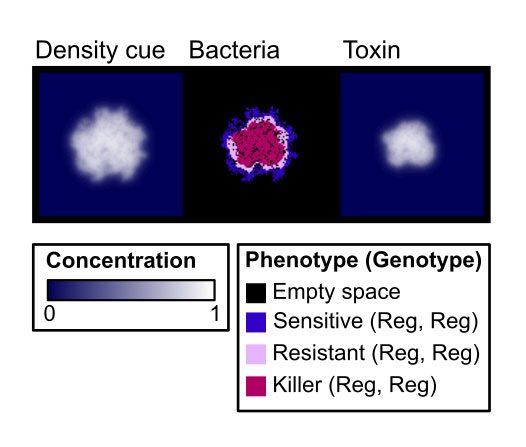 Figure: Colony structures predicted by the evolutionary models. Toxin (right panel) is produced in the interior of the colony, where the population density (left panel) is high, by a "killer" phenotype.  The periphery of the colony, however, features fast-growing non-toxic cells ("sensitive" phenotypes) ensuring rapid colony growth.

Many species, including Streptococcus pneunomiae, produce toxins only if the local density of bacteria is high. To achieve this, bacteria respond to cell-density cues: signaling molecules or other indicators of the presence of other cells. In the work by Doekes et al, which was funded by an HFSP Young Investigator Grant and published recently in PLOS Computational Biology, the authors used a computational model to study the evolution of density-based regulation of toxin production in bacterial populations. They show that such regulation can arise under various growth conditions, and analyze the selection pressures driving its evolution. In particular, they find that if bacteria regularly need to colonize a new habitat, density-based regulation allows them to express a fast-growing, non-toxic phenotype when expanding into uncolonized territory, and a slower-growing, toxin-producing phenotype when competing with other strains. Colonies of such regulating cells show a remarkable structure: the fast-growing, non-toxic phenotype forms the expanding edge of the colony, whereas the toxin-producing phenotype is expressed in the interior and at the interfaces between colonies.

These modeling results provide new hypotheses on the strategies and mechanisms driving the evolution of density-regulated toxin production. Lab experiments on engineered Streptococci in which the toxic phenotype lights up due to a fluorescent label could determine whether the predicted colony structures and growth strategies are indeed employed.