During animal development, initially small muscles need to grow dramatically to produce the high forces needed for our body movements. How this enormous gain of muscle volume is controlled has now been revealed using the fruit fly.

Muscles power running, swimming or flying in animals. The forces are produced by chains of actin and myosin motors called myofibrils. During animal development, muscles form by fusion of small myoblasts in to initially rather small myotubes. These myotubes then build their contractile myofibrils and grow dramatically in size to power future animal movements. How this enormous gain of muscle volume is controlled during development has now been revealed using the fruit fly Drosophila. An interdisciplinary team led by Frank Schnorrer and Bianca Habermann at the Developmental Biology Institute of CNRS and Aix Marseille University, together with Matthias Mann at the Max Planck Institute of Biochemistry in Munich and Bart Deplancke at the École Polytechnique Fédérale of Lausanne discovered that a signalling pathway, called the Hippo pathway, is controlling muscle growth during the development of Drosophila flight muscles. 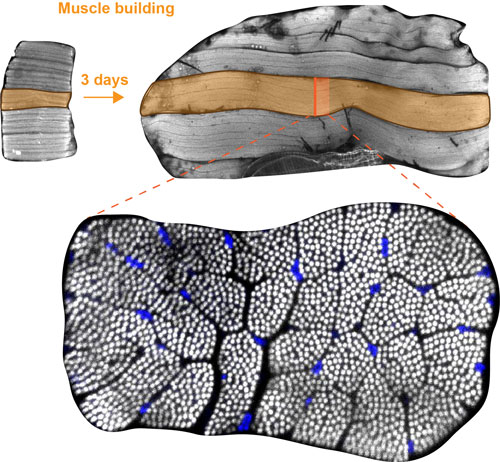 The Hippo pathway is a famous conserved gate keeper for tissue growth, discovered in the fruit fly almost 20 years ago. It also controls growth in mammals and is particularly important in cancer development when de-regulated. Most of what we know to date about how the Hippo pathway is regulated stems from studies in epithelial cells, like skin or gut cells. During normal tissue growth the Hippo kinase is inactive, allowing the epithelial cells to grow and divide to fill the available space, matching the growth of the organism. When the available space is filled, tissue mechanics feedback and trigger the activation of the Hippo kinase, which stops further growth.

With the important support of our HFSP Program Grant to investigate how mechanical tension controls the assembly and growth of the contractile myofibrils, we identified an interesting twist in how the Hippo pathway is regulated in flight muscle to supervise its growth. In contrast to epithelia, this cell type does not divide anymore but grows by increasing the size of the individual cells, very similar to how the human heart is growing during development or exercise. Aynur Kaya-Çopur, first author of the study, found that the Hippo kinase in muscle is regulated by a particular phosphatase complex, called the STRIPAK complex, located at muscle membranes, which are in close contact to the contractile myofibrils. Hence, our findings suggest that a need for growth is sensed mechanically: too small muscles are ‘overstretched’ and hence need to grow. They do so, not by cell division but rather by the production of more myofibril proteins such as actin, myosin and many others, which results in more, as well as longer and thicker myofibrils. Thus, muscle volume increases. We found that the Hippo kinase needs to directly bind to the STRIPAK complex in muscle for its normal regulation. How precisely the ‘mechanical signal’ talks to the STRIPAK complex to block Hippo kinase activity remains to be discovered.

In the future, it will be exciting to explore if a similar mechanism controls the timing and the amount of myofibril protein production in the human heart, which also grows tremendously during development or exercise training.