Researchers from Kiel and Düsseldorf use the example of the sea anemone Nematostella vectensis to investigate the contribution of the microbiome to thermal adaptation of living organisms.

All multicellular organisms are colonized by an unimaginably large number of microorganisms and have co-evolved with them from the very beginning of life's evolutionary history. The natural microbiome, i.e. the totality of these bacteria, viruses and fungi living in and on a body, is of fundamental importance for the organism as a whole: it performs vital tasks for the host, for example, it assists in nutrient uptake and it helps defend against pathogens. A research team from Heinrich Heine University Düsseldorf (HHU) and Kiel University has now investigated how the microbiome assists an organism in the adaptation to changing environmental conditions. In a study within the Collaborative Research Center (CRC) 1182 "Origin and Function of Metaorganisms", they have investigated the involvement of the microbiome in thermal adaptation of anemones in a so-called acclimation experiment. The researchers led by Professor Sebastian Fraune of the HHU Institute of Zoology and Organismic Interactions, who is also project leader in the Kiel CRC 1182, were able to show that the bacterial colonization of the animals changes as a result of acclimation. Furthermore, the organism of the sea anemone becomes more resistant to heat stress. In addition, the research team succeeded in proving a causal relationship: If they transferred the microbiome of heat-adapted to non-acclimated anemones, the latter also became less sensitive to higher temperatures. The CRC 1182 research team published the results, which are particularly significant with regard to changing environmental conditions as a result of climate change, recently in the journal Nature Communications. 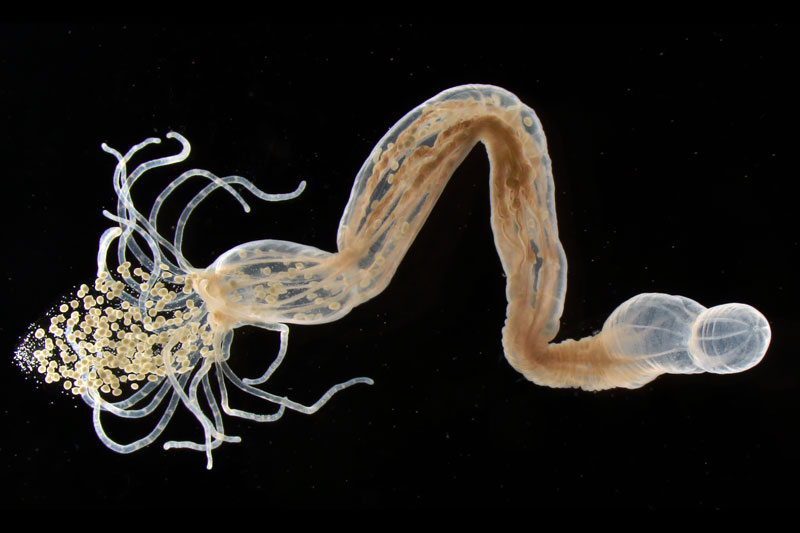 Figure: The offspring of the sea anemone Nematostella vectensis, shown here laying eggs, can directly inherit the temperature tolerance of the parent generation by passing on certain bacteria. © Hanna Domin.

The new work is based on a long-term study funded by the Human Frontier Science Program (HFSP), in which the researchers have been studying the adaptation of anemones to changing environmental conditions for more than four years. To do this, they worked with clones of a single original animal and compared 50 genetically identical anemones in each of 15 different colonies. The researchers divided these colonies into three groups that were kept at 15, 20 and 25 degrees Celsius in order to analyse their acclimation to different temperatures. In the course of the long observation period, characteristic changes in the so-called phenotype of the anemones, i.e. in their external shape including physiological features, became apparent: among other things, the animals grow significantly larger at lower temperatures and they changed their reproductive mode. Changes in temperature tolerance were also particularly interesting.

"The anemones differed very significantly in their stress resistance to high temperatures. If we exposed them to a very high temperature stress of 40 degrees Celsius for six hours, the animals acclimated at 25 degrees Celsius almost exclusively survived," says Laura Baldassarre, former member of Fraune’s group and lead author of the study.

Previous research suggested that adaptation to temperature stress may be related to changes in the microbiome composition of the animals. Analysis of the bacterial colonization of the different colonies in the acclimation experiment again supported this hypothesis, as the microbiome of the acclimated animals also changed compared to their non-acclimated conspecifics.

"That acclimation, the so-called phenotypic plasticity, can be partly controlled by bacteria seems very plausible. Their much shorter generation times allow a much faster adaptation than would be possible via genetic recombination of the host organism," emphasizes Fraune.

The fact that there is indeed a causal relationship between the change in the microbiome and temperature adaptation has now been proven.

Thus, when the entire microbiome of an animal is transferred, the phenotype with its altered temperature tolerance can also be transplanted.

Fraune: "We were able to establish a causal relationship between microbiome composition and environmental adaptations. Thus, we experimentally confirm the so-called hologenome concept, which defines evolution as the development of host organisms with their colonizing microorganisms toward shared fitness benefits for the entire metaorganism."

The research team then analyzed whether the altered microbiome due to thermal acclimation can be passed on between anemones - a prerequisite for a lasting adaptation process. In previous work, the scientists already showed that in Nematostella, certain bacteria can be passed on from the parent generation to the offspring. The evolutionary advantage of thermal adaptation can therefore in principle be inherited directly and the related bacteria must not necessarily be taken up from the environment. The current study provides further evidence of the transmission of maternal bacteria to the offspring: Like their genetically identical parents, the offspring also showed a higher probability of survival under temperature stress when the maternal animals were acclimated at 25 degrees Celsius.

Investigating mechanisms at the species level

With their findings, the researchers are helping to better understand the role of the interplay between host organisms and microbes in adaption processes to rapidly changing environmental conditions.

"Our results offer new explanations for the mechanisms of rapid thermal adaptation mediated by the microbiome and how they are transmitted to subsequent generations," Fraune said.

In further research, the scientists in Düsseldorf and Kiel now want to explore the mechanisms of acclimation in detail, with a particular focus on the role of individual bacterial species involved. To this end, detailed bacterial genomic analyses are in preparation for a planned third funding phase of the CRC 1182 by the German Research Foundation (DFG). They will shed light on possible individual relationships between bacteria and certain metabolic processes of the host cells and their influence on the temperature tolerance of the organism as a whole.

"Overall, it is important to understand the bacterial component of thermal acclimation in more detail. It likely plays a fundamental role in many other living organisms from various animals and plants to overall ecosystems such as coral reefs. Deeper knowledge of the underlying processes is therefore crucial to better assess or possibly mitigate the effects of global change on species and habitats", Fraune summarizes.

Link to article in Nature Communications