A special anniversary event will be held in Tokyo on the afternoon of Tuesday, 9 July 2019 to celebrate the 30th anniversary of HFSP.

The venue is sometimes mistaken for another venue with a similar name in the neighborhood. The correct location is here.

The 2019 HFSP Nakasone Award ceremony will be another highlight of the meeting and the winner will deliver a short talk (the full HFSP Nakasone Lecture will take place at the Awardees Meeting in Tsukuba).

The meeting will be followed by a reception in the early evening, after which participants of the HFSP Awardees Meeting will be transported by bus to the conference hotels in Tsukuba.

Hitotsubashi Hall is a 5-minute walk from the KKR hotel.

From the Mercure Ginza hotel you can either take a taxi (10 minutes) or the Tokyo metro (30 minutes). Take the Ginza line from Ginza station to Nihonbashi station, change to the Tozai line and take the train to Takebashi station. The venue is 5 minutes’ walk from the station (see map below). 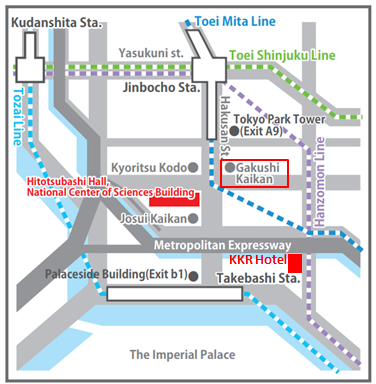