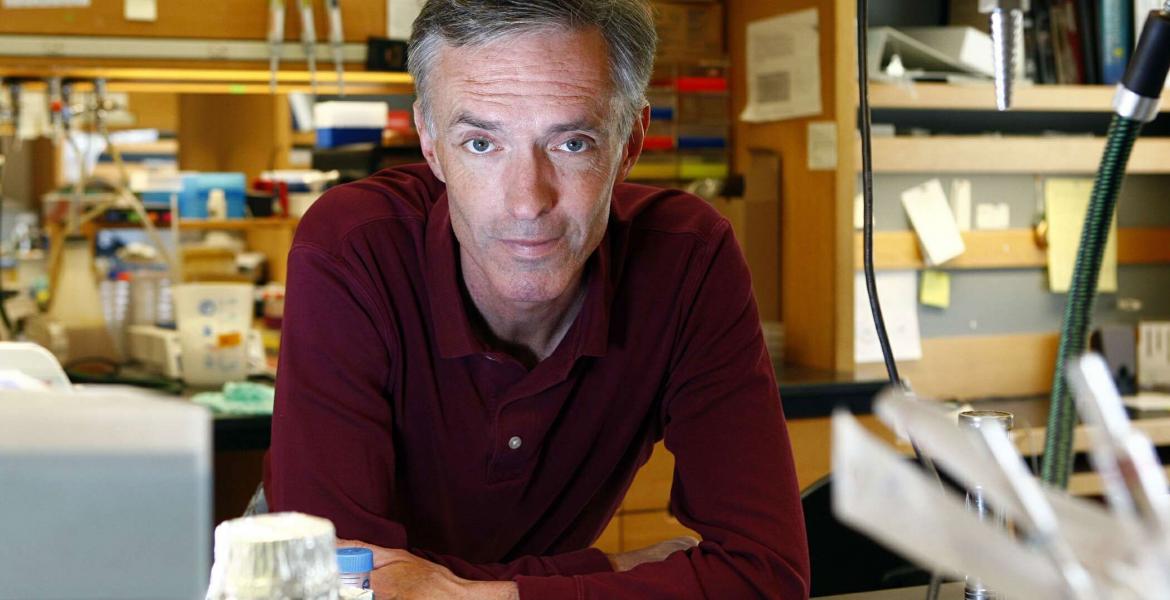 James Collins received the 2015 HFSP Nakasone Award for his innovative work on synthetic gene networks and programmable cells that launched the exciting field of synthetic biology.

Prof. James J. Collins is a Howard Hughes Medical Investigator at the Center of Synthetic Biology of Boston University, of which he is the director. He holds a William F. Warren Distinguished Professorship for Biomedical Engineering at the Department of Biomedical Engineering, Boston University. He is also a Founding Core Faculty Member of the Wyss Institute for Biologically Inspired Engineering, Harvard University, Boston, USA, where he leads the platform for Anticipatory Medical and Cellular Devices.

James Collins was one of the first to show that one can engineer biological circuits out of proteins, genes and other bits of DNA. He designed and constructed a genetic toggle switch - a bistable gene circuit with broad implications for biomedicine and biotechnology. The study represents a landmark piece, one that marks the beginnings of synthetic biology. Building on this breakthrough work, Collins showed that synthetic gene networks can be used as regulatory modules and interfaced with the cell's genetic circuitry to create programmable cells for biomedical and biotech applications. Along these lines, Collins has developed whole-cell biosensors to detect various stimuli (chemicals, pathogens, heavy metals, explosives), as well as synthetic probiotics to detect and treat infections (e.g., cholera). Collins has also designed and constructed RNA switches, genetic counters, programmable microbial kill switches, synthetic bacteriophages to combat bacterial infections, genetic switchboards for metabolic engineering, synthetic mRNA for stem cell reprogramming, and tunable mammalian genetic switches. Collins' breakthrough work in synthetic biology is revolutionizing the biosciences and changing our world for the better.

This ground-breaking work in synthetic biology has also enabled investigations into basic biological regulatory mechanisms. For example, Collins has utilized synthetic gene networks to study the effects of positive feedback in genetic modules, the role and origin of stochastic fluctuations in eukaryotic gene expression, and the phenotypic consequences of gene expression noise and its effects on cell fate.

Collins' innovative work in synthetic biology is impacting the biosciences and biotech industry. The World Economic Forum identified synthetic biology as one of the world's top emerging technologies, and Fidelity Investments stated that synthetic biology could be "the defining technology of the 21st century." Collins’ engineered gene circuits and synthetic biology technology have been utilized by multiple companies in diverse fields, including ag-bio, food safety, bioenergy, antibacterials, research tool development, stem cell engineering, hygiene, and drug discovery. His work has inspired hundreds of labs around the world and enabled multiple biomedical applications, including in vivo biosensing, antibiotic potentiation, biofilm eradication, drug target identification and validation, microbiome reengineering, and efficient stem cell reprogramming and differentiation. Collins' mammalian switch technology is being used by hundreds of research groups around the world, making it one of the most widely adopted research tools in synthetic biology, and his programmable microbial kill switch was highlighted by President Obama's Bioethics Commission as a much-needed safeguard for real-world applications of synthetic biology.

The work of James Collins is advancing, if not defining, the emerging discipline of synthetic biology, and his path-blazing research on synthetic gene networks and programmable cells is transforming the life sciences and expanding our ability to study and harness complex mechanisms of living organisms.

James Collins will give the Nakasone Lecture during the 15th HFSP Awardees Meeting to be held at the Salk Institute in La Jolla, California, in July 2015.

More information on Prof. James Collins and his work is available at https://wyss.harvard.edu/team/core-faculty/james-collins/.