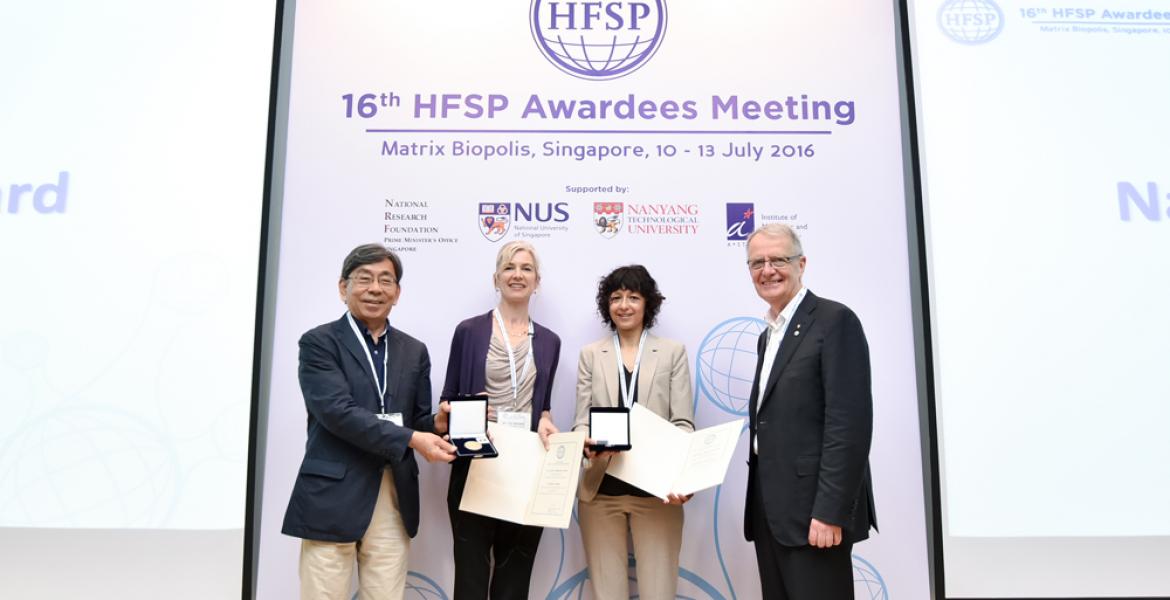 Emmanuelle Charpentier and Jennifer Doudna have been awarded the  2016 HFSP Nakasone Award for their seminal work on the CRISPR-Cas9 system. 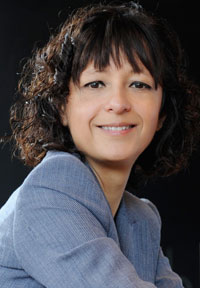 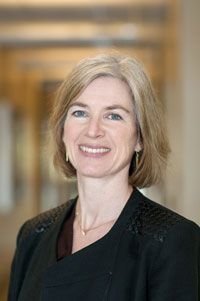 Their work arose out of a discovery in the late 1980s of neighboring bacterial DNA segments consisting of repeating nucleotide sequences, which flank short segments. Recent studies have shown that pathogenic bacteria possess an immune defense system against predators, and particularly against attacks by viruses (bacteriophages). This defense system works for Streptococcus pyogenes, using a duplex of two small RNA molecules that contain sections of the virus genome called “clustered regularly interspaced short palindromic repeats” (CRISPR), which carry the memory of a previous attack.

Through their collaborative work, Charpentier and Doudna discovered that CRISPR furthermore acted as the guide for a protein (Cas9), which kills the virus by cleaving its genome. Thus, these two entities grouped together form the CRISPR-Cas9 complex, allowing Streptococcus bacterium to resist virus attacks.

The scientists used this existing defense mechanism in bacteria to turn CRISPR-Cas9 into a real tool for cleaving the DNA of bacterial and also human cells. These “genetic scissors” can be used for targeting any gene in a cell in order to modify it. With this revolutionary technology, it is much easier to modify gene expression, to switch a gene “on” or “off,” or to change, repair, or remove genes. This new tool is now used in molecular biology laboratories around the world, and has the potential to revolutionize medicine by paving the way to finding new forms of treatment for currently incurable diseases.

Their collaboration led to a seminal study from which resulted this so called “genome editing technology”, which exploits the fact that the CRISPR system, which is present in S. pyogenes, uses Cas9 for interference. Cas9 is an enzyme that acts alone thereby providing a very simple system to edit genomes in various ways.

The rapid progress in developing Cas9 into a set of tools for cell and molecular biology research has been remarkable, likely due to the simplicity, high efficiency and versatility of the system. The development of efficient and reliable ways to make precise, targeted changes to the genome of living cells is a long-standing goal for biomedical researchers. The CRISPR-Cas9 system has a potential that reaches beyond DNA cleavage, and its usefulness for genome locus-specific recruitment of proteins will likely only be limited by our imagination.

Emmanuelle Charpentier obtained her PhD from the Pasteur Institute. Following research positions in New York, at The Rockefeller University and Memphis, she returned to Europe in 2002 and established a research group at the Max F. Perutz Laboratories, University of Vienna and six years later at the Laboratory for Molecular Infection Medicine Sweden (MIMS) at the University of Umeå in Sweden. Since 2013, she is also Head of the Department "Regulation in Infection Biology" at the Helmholtz Centre for Infection Research, and Professor at the Medical School of Hannover in Germany. In October 2015, she was appointed Scientific Member of the Max Planck Society in Germany and Director at the Max Planck Institute for Infection Biology in Berlin.

Jennifer Doudna graduated from Harvard University where she worked with HHMI investigator Jack W. Szostak. She then took up a postdoctoral position in the laboratory of Thomas R. Cech at the University of Colorado at Boulder. In 1996, she became assistant professor at Yale University where she was promoted to the position of Henry Ford II Professor of Molecular Biophysics and Biochemistry in 2000. Since 1997, she has been an HHMI Investigator, herself. She currently holds a professorship in Chemistry and Molecular Biology and Cell Biology at the University of California at Berkeley and is the Li Ka Shing Chancellor’s Professor.

Emmanuelle Charpentier and Jennifer Doudna will give the Nakasone Lecture during the 16th HFSP Awardees Meeting to be held from 10 - 13 July, 2016 at the Biopolis in Singapore.

Two articles in the Economist and Quanta magazine highlight the seminal work of the two awardees and show the great potential and promise for medical applications.