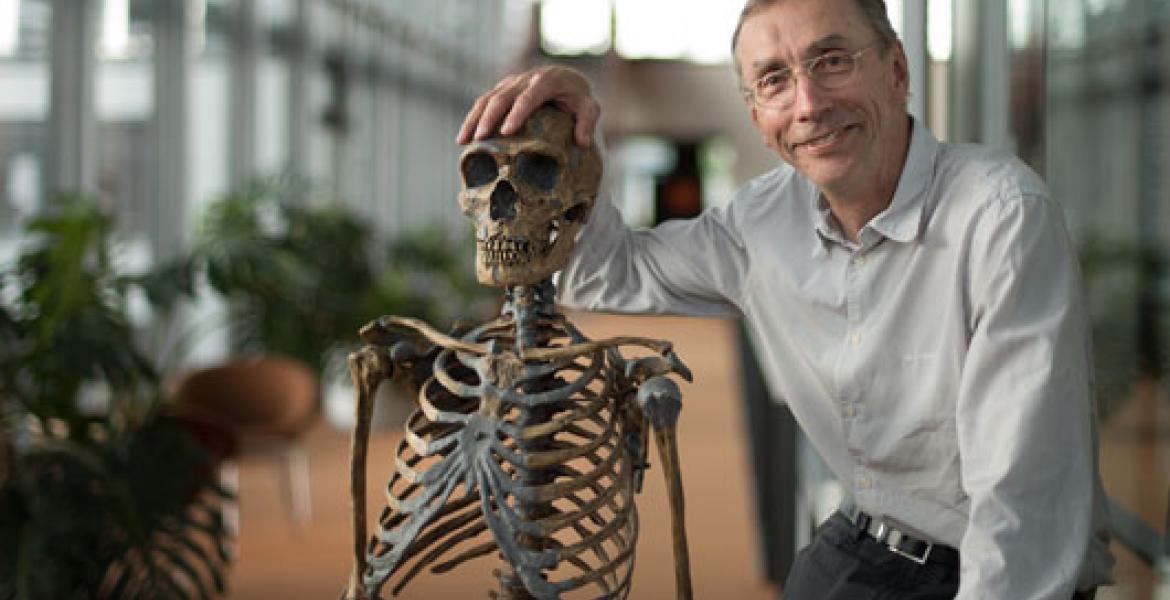 Svante Pääbo received the 2018 HFSP Nakasone Award for his discovery of the extent to which hybridization with Neanderthals and Denisovans has shaped the evolution of modern humans, and his development of techniques for sequencing DNA from fossils.

Svante Pääbo, of the Max Planck Institute for Evolutionary Anthropology, is the founder of molecular archeology which involves the recovery, sequencing and analysis of DNA sequences from ancient remains found by paleontologists and archaeologists. In 1985, while a student in Sweden, he showed that DNA can survive in Egyptian mummies. He continued to develop methods of increasing sophistication to determine DNA sequences from ancient remains. These techniques permitted Pääbo to recover mitochondrial DNA sequences from a Neanderthal bone in 1997. It was the first time that molecular genetics’ data were extracted from a fossil hominin. His meticulous analysis of this sample of DNA sequences showed that the Neanderthals did not contribute to the mitochondrial DNA of all contemporary human genes. On the contrary, the human and Neanderthal mitochondrial DNA only share a common ancestor from which we diverged more than 500,000 years ago. Although these results were sometimes interpreted wrongly as excluding any genetic contribution of Neanderthals to anatomically modern humans, Pääbo defended a balanced interpretation that places these results in the context of population genetics and variations between humans and contemporary apes.

Pääbo has adapted and applied high-throughput DNA sequencing techniques to ancient DNA, opening the possibility to analyze whole genomes of extinct organisms. He launched the ambitious project to sequence the entire Neanderthal genome, which resulted in a first draft of the Neanderthal genome and its direct comparison to present-day human genomes. One of the key findings is that about 2% of the genomes of all humans whose roots are outside Africa come from Neanderthals. This solves a long-standing debate on a possible mixture of Neanderthals with modern humans with the demonstration that the interbreeding did take place. The work of several groups has subsequently shown that this genetic contribution has functional consequences for example for the immune system, for aspects of metabolism, and susceptibility to type 2 diabetes.

Pääbo has continued his research with the genome sequence of a small bone found in a cave in southern Siberia. Analysis of this genome showed that it came from a group of previously unknown hominins, related to Neanderthals, but with a long independent history. This group, which he named "Denisovans" after the site where the bone was found, is the first group of extinct hominins described exclusively from genetic data. Pääbo has also shown that Denisovans contributed about 5% to the genomes of inhabitants of Papua New Guinea, Australia and other parts of Oceania today. Other groups have used the Denisovan genome to show that a significant adjustment to life at high altitude in Tibet is derived from it.

Recently Pääbo developed a new method for efficient sequencing from small amounts of degraded DNA and derived the complete genome sequences of a Denisovan and two Neanderthals with an accuracy comparable to that of the genome of modern humans. The analysis of these genomes has helped, in particular, to reveal almost all the changes that have occurred in the genome of modern humans since their separation from their closest relatives - Neanderthals and Denisovans. This catalog includes thirty thousand modifications and will be the working basis for anthropological research of human specificity for years to come.

In summary, Pääbo has systematically developed techniques to isolate and sequence DNA that is tens and hundreds of thousands of years old. This is not an easy task since ancient DNA is heavily degraded, modified by chemical processes, and present in a vast excess of microbial DNA. In addition, old samples often contain traces of modern DNA which can confuse the analysis.

Besides being the founder of the field of molecular paleontology, Pääbo is a leading researcher in the field of comparative genomics and history of human populations. Pääbo has pioneered the comparison between humans and apes to better understand the genetic history of humans. His studies showed that humans differ from apes in having low genetic variation in their nuclear genome, but carry a signal of a population expansion in their recent evolutionary past. Svante Pääbo is a pioneer in the functional genomics approach to human evolution by comparing genomes and gene expression in humans and great apes. In particular, he has studied genes that changed during recent human evolution, for example FOXP2, which is involved in language and speech.

Link to the Department of Svante Pääbo