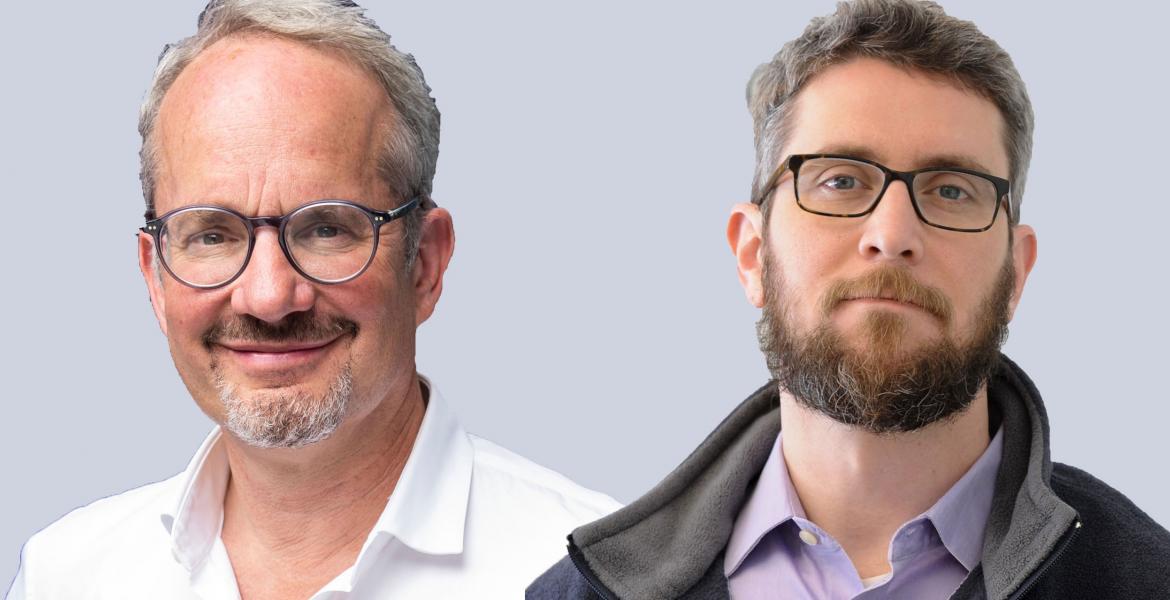 The 2021 HFSP Nakasone Award is awarded jointly to Anthony Hyman and Clifford Brangwynne for their discovery of a new state of biological matter, phase-separated macromolecule condensates, that play an important role in cell organisation, gene regulation, signalling and pathology.

Anthony Hyman of the Max Planck Institute of Molecular Cell Biology and Genetics, Dresden (Germany) and Clifford Brangwynne of Princeton University and the Howard Hughes Medical Institute (USA) have been awarded the 2021 HFSP Nakasone Award for their discovery of a new state of biological matter, phase-separated macromolecule condensates, that play an important role in cell organisation, gene regulation, signalling and pathology.

In their 2009 publication, Cliff Brangwynne and Anthony Hyman reported that P-granules, which specify the germ line in C. elegans development, are phase-separated droplets consisting of specific proteins and RNAs that assemble into a liquid condensate in order to concentrate on one side of the egg cell. This finding was completely unexpected, and Hyman and Brangwynne immediately recognized its importance as revealing a new form of biological matter. They correctly predicted that phase separated liquid macromolecule condensates would be widespread in biology, with multiple roles in normal biology and pathogenic processes. Brangwynne and Hyman then discovered that nucleoli, the ribosome factories in the nucleus, are also phase separated liquid condensates – the second example after P-granules.

Hyman’s group went on to reconstitute phase separation, using the RNA binding protein FUS as a pure protein model, and to dissect the underlying physical biochemistry. This work showed that disease-causing mutations in FUS cause normal liquid condensates to harden into toxic amyloids. This work established widely imitated approaches for the condensate field, where pure protein reconstitution of phase separation is combined with live imaging and mutagenesis. During his career, Hyman has been part of three HFSP research grant teams.  He is currently the holder of an HFSP Program Grant to work on a project with Daniel Colon Ramos that seeks to study the role of phase separation in the process of glycolysis.

Cliff Brangwynne’s training in soft matter physics was key to identifying signatures of the liquid-liquid phase separation of P granules and nucleoli, and measuring the surface tension and viscosity parameters that govern the physical behaviour of this novel form of biological matter. He develops methods to further explore the mechanisms and implications of liquid phase transitions associated with various cell compartments. His Princeton laboratory’s first grant was an HFSP award that directly supported pioneering in vitro work showing that the material properties of in vitro reconstituted P granules are tunable through salt and RNA concentration. His work with nucleoli uses changes in cell volume and variances in nucleolar protein concentration that happen during organismal development to study the dynamics of liquid phase partitioning, which are important for regulating gene expression. A key discovery was that nucleoli and other condensates represent multiphase liquids, with a condensed liquid of one composition embedded with another. More recently, he created an approach using light-sensitive proteins that enables precise spatiotemporal control over intracellular liquid droplets both in vitro and in living cells, which has been widely adopted by the field.

Phase separation biology is now the fastest growing and most exciting area in all cell biology, with hundreds of laboratories working on the problem. A set of landmark papers in 2019 demonstrated a central role of phase separation of transcription factors in regulation of gene expression in human cells. Condensates are a frontier area in cell biology research worldwide, with hundreds of papers coming out in high-impact journals across all areas of biology. Condensates play central roles in gene regulation, photosynthesis and in the barrier function of human skin and many other aspects of biology.

The drug discovery industry has been quick to recognize the potential of phase separation biology, and several biotech companies have been founded in this area. Multiple companies have started to explore drugging condensates to treat human disease, with the hope of ‘drugging the undruggable’. Early progress suggests it will be possible to both up- and down-regulate the function of proteins that are not conventionally druggable, such as transcription factors, viral matrix proteins and RNA binding proteins, by modulating their dynamics in condensates.

Anthony Hyman is Director and Group Leader at the Max Planck Institute of Molecular Cell Biology and Genetics. He received a first-class BSc in Zoology from the University College in London (1984) and a PhD from the Laboratory of Molecular Biology, MRC in Cambridge, UK (1987). From 1988-1992, he was a postdoctoral fellow at the University of California, San Francisco. In 1993, he became a Group Leader at the European Molecular Biology Laboratory in Heidelberg, before he moved to Dresden in 1999 as one of the founding directors of the Max Planck Institute of Molecular Cell Biology and Genetics (MPI-CBG), where he remains a Director and Group Leader today. In 2002, Hyman was named honorary Professor of Molecular Cell Biology at the Technical University Dresden. He was awarded the EMBO Gold Medal in 2003, and was elected as a Fellow of the Royal Society in 2007. In 2011, Hyman was awarded the Gottfried Wilhelm Leibniz Prize, the most important research award in Germany. Most recently, in 2017, he received the Schleiden Medal from the German National Academy of Sciences Leopoldina. This award is given once every two years for outstanding findings in the field of cell biology. In 2019, Hyman was awarded the Carl Zeiss Lecture for outstanding achievements in Cell Biology and was elected a member of the National Academy of Sciences.

Cliff Brangwynne received a BS in Materials Science and Engineering from Carnegie Mellon University (2001) and a PhD in Applied Physics from Harvard University (2007). He was a Helen Hay Whitney postdoctoral researcher at the Max Planck Institute of Molecular Cell Biology and Genetics and the Max Planck Institute for the Physics of Complex Systems from 2007 to 2010, prior to joining the faculty of Princeton University in 2011, where he is currently a Professor in the Department of Chemical and Biological Engineering, and Director of the Princeton Bioengineering Initiative. In 2018, he was named an Investigator at the Howard Hughes Medical Institute, one of the most sought-after appointments in American science. He is the recipient of numerous awards including a Searle Scholar, NSF CAREER Award, NIH New Innovator Award, ASCB Emerging Leader, Sloan Fellow, and in 2018, he was awarded the prestigious MacArthur Fellowship. This year he was also awarded the Blavatnik Award for Young Scientists, and the Michael and Kate Barany Award from the Biophysical Society.

In February 2020, Anthony Hyman and Cliff Brangwynne were co-recipients of the Wiley Prize in Biomedical Sciences for their pioneering studies in cell biology.