A bridge over troubled synapses in neurological diseases

A broad range of neuropsychiatric and neurological disorders is thought to be caused by abnormalities in the structure and function of synapses, which are the contact sites between neurons. We have developed a synthetic synaptic organizer that restores synaptic connections and improves pathological conditions of cerebellar ataxia, Alzheimer's disease, and spinal cord injury in mouse models.

Synapses, which are the connections between nerve cells, are formed, maintained, and remodeled, not only during organism development, but also throughout life by molecules termed synaptic organizers. Many neuropsychiatric or neurological disorders, such as autism spectrum disorders, schizophrenia, and Alzheimer's disease, are considered to be caused by an imbalance of excitatory and inhibitory signaling at synapses; however, there are still no therapeutic methods for directly controlling the formation of synapses with defined functional properties. 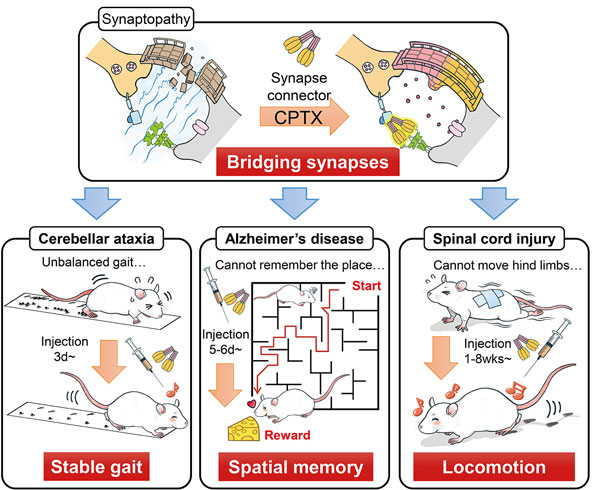 Figure:  CPTX restores neural circuits and improves motor coordination and spatial memory. A broad range of neuropsychiatric and neurological disorders are thought to be caused by abnormalities in synapses and referred to as synaptopathy (upper panel). CPTX administered to mouse models of cerebellar ataxia, Alzheimer's disease, and spinal cord injury could successfully restore synapses and improve motor coordination, spatial and contextual memories, and locomotion associated with these disease models, respectively (lower panels).

Structure-guided design of synthetic synaptic organizers targeting distinct pre- and post-synaptic molecules may inspire the development of a variety of innovative molecular tools that can repair or remodel a wide range of neural circuits. These tools are expected to illuminate the mechanisms of synapse formation and maintenance as well as promote the development and application of new treatments for neuropsychiatric or neurological disorders.

Video 1: Gait performance before and after the injection of CPTX in GluD2-null mice.

Video 2: Effects of acute CPTX injections on motor performance at 4 weeks after SCI.

A TV interview by Japan Broadcasting Cooperation (in Japanese)