The study, published in Science Advances, shows that the mitochondrial electron transport chain adjusts its activity to the body’s energy needs. The regulatory protein SCAF1 enables mitochondria to adapt to the available nutrient source of sugars, fats, or proteins. This metabolic adaptation explains the ability of mitochondria to adjust to stress situations, for example during intense physical activity.

Madrid, 24 June 2020. Scientists at the Centro Nacional de Enfermedades Cardiovasculares (CNIC) have identified the molecular mechanism by which mitochondria— the main source of the cell's energy supply— regulate their function to optimize energy production in order to meet the body’s changing needs. The discovery, published in the journal Science Advances, helps to explain how the body regulates its metabolism.

The study, led by CNIC scientists Jesús Vázquez and José Antonio Enríquez, and carried out in collaboration with Jesús Francisco Rodríguez Huertas, Scientific Director of the Institute of Nutrition and Food Technology/Biomedical Research Centre (CIBM) and Full Professor, Department of Physiology, University of Granada, shows that mitochondria adjust the efficiency of the electron transport chain (ETC) to meet the body’s needs by regulating the associations between its component macromolecular structures. The researchers found that the protein SCAF1, discovered by the same team in 2016, plays a key role in this metabolic regulation by optimizing mitochondrial energy efficiency in response to high energy demand. 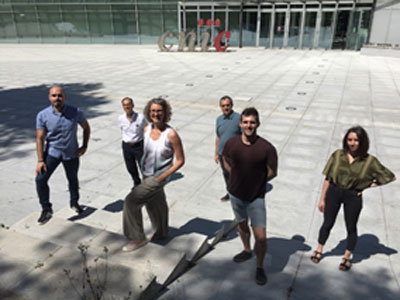 Mitochondria, which house the mitochondrial ETC, generate most of the cell’s energy supply and adjust their function to meet the body’s metabolic needs. “The electron transport chain generates energy from nutrient molecules, such as glucose and fatty acids, and also has an important role in the synthesis of molecules needed to maintain cellular and bodily health,” explained Dr José Antonio Enríquez.

The ETC is composed of four large multiprotein complexes: CI, CII, CIII, and CIV. These complexes can alter their structural organization to carry out different functions and adapt to local conditions. 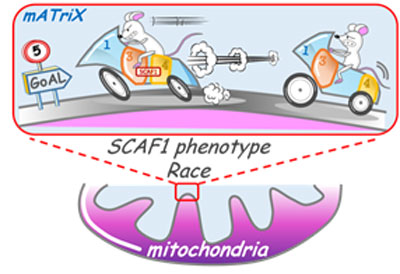 Figure: The figure represents the association of the respiratory complexes I, III and IV to form the N-respirasome super complex. The presence or absence of the SCAF1 protein determines the efficiency in the use of the energy source (food) to convert it into productive work by keeping complexes III and IV physically connected within the N-respirasome. SCAF1 would work like the gears of a motorcycle allowing efficient regulation of performance.

In 2016, the CNIC research team discovered that the protein SCAF1 forms a bridge between complexes CIII and CIV, acting as a molecular switch that regulates the assembly of these complexes into superstructures within the ETC (Nature 539, 579–582 (2016)). However, as co-director Dr Jesús Vázquez explained, “we did not know if the formation of these SCAF1-regulated structures affected mitochondrial energy efficiency or what physiological impact they had.”

The Science Advances study demonstrates that SCAF1-mediated formation of specific ETC superstructures affects not only the efficiency of mitochondrial energy production, but also the body’s ability to respond to physiological stress.

“We used mouse models and cultured cells engineered to lack the gene encoding SCAF1, thus enabling us to study the effect of eliminating this protein,” explained Enrique Calvo, a lead author on the study together with Sara Cogliati, Pablo Hernansanz-Agustín, and Marta Loureiro-López.

The research team used new proteomics methods developed at the CNIC together with cutting-edge genetic, biochemical, and metabolic techniques. Using this technology, “we show that, in the absence of SCAF1, the ETC complexes adopt a suboptimal configuration that reduces the efficiency of energy production,” said Pablo Hernansanz-Agustín.

The study also shows that the lack of SCAF1 reduces the capacity of mice for intense physical activity. “The physical output of these mice is 30% below that of unmodified mice,” explained Sara Cogliati.

These results explain molecularly the observation recently published in EMBO Reports, and carried out in collaboration with Nadia Mercader's group, from the University of Bern (Switzerland), in which the researchers saw that the ablation of the SCAF1 protein in zebrafish impairs their metabolism, growth and fertility.

The research team conclude that SCAF1-mediated physical interaction between CIII and CIV is essential for optimal mitochondrial energy production. Marta Loureiro-López explained that “SCAF1 is a regulatory factor that allows mitochondria to adapt to the available nutrient sources of sugars, fats, or proteins. This capacity for metabolic adaptation also explains the ability of mitochondria to adapt to stress situations, for example during intense physical exercise.”

The Centro Nacional de Investigaciones Cardiovasculares (CNIC), directed by Dr. Valentín Fuster, is dedicated to cardiovascular research and the translation of knowledge gained into real benefits for patients. The CNIC, recognized by the Spanish Government as a Severo Ochoa center of excellence, is financed through a pioneering public-private partnership between the government (through the Carlos III Institute of Health) and the Pro-CNIC Foundation, which brings together 12 of the most important Spanish private companies.

Link to article in Science Advances