Social bacteria live in large groups, in which they cooperate, for example, when searching for food. To avoid starvation, some species of soil bacteria build massive mushroom-like aggregates known as fruiting bodies. New research shows that bacteria accomplish this feat by aligning in patterns like those in fingerprint whorls.

Forest-dwelling bacteria, Myxococcus xanthus, known for forming slimy swarms that prey on other microbes display a stunning behavior, by which they cooperate to construct mushroom-like survival shelters known as fruiting bodies when food is scarce. HFSP Cross-Disciplinary fellow Ricard Alert and his colleagues at the Center for the Physics of Biological Function and the Lewis-Sigler Institute for Integrative Genomics (LSI) at Princeton University have discovered the physics behind how these rod-shaped bacteria, which align in patterns like those on fingerprint whorls and liquid crystal displays, build the layers of these fruiting bodies. Multicellular structures start to develop from cell layers made visible by confocal three-dimensional imaging. The team found that the rod-shaped bacterial cells form dense aggregates in which cells align with one another, similar to the molecules in liquid crystals. Cell alignment is nearly perfect throughout the colony except at special points known as topological defects, where cell alignment is lost. The researchers discovered that new cell layers preferentially form at these singular points. 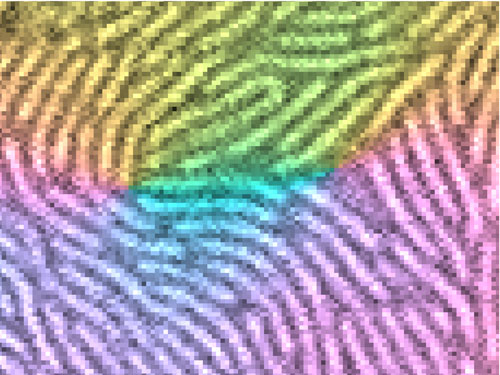 Figure: To avoid starvation, some species of soil bacteria build massive mushroom-like aggregates known as fruiting bodies by aligning in patterns like those in fingerprint whorls.

To explain their findings, the team modelled the bacterial colony as an active liquid crystal, and they were able to predict how cells flow around the defect points. In agreement with their experimental results, the calculations showed that cells accumulate at defect points, eventually popping up to form a new cell layer. The results suggest that cell motility and mechanical cell–cell interactions are sufficient to promote the formation of cell layers at topological defects, thereby seeding fruiting bodies in colonies of M. xanthus.

You can read more in the press release from Princeton University.

Link to article in Nature Physics