Although most humans are not consciously aware of the geomagnetic stimuli that they encounter in everyday life, we found two classes of ecologically-relevant rotations of Earth-strength magnetic fields that produce strong, specific and repeatable effects on human brainwave activity in the EEG alpha band (8-13 Hz); EEG discriminates in response to different geomagnetic field stimuli.

These data strongly support the presence of a geomagnetic sensory system in human neurophysiology similar to that known in many migratory and homing animals. Biophysical tests rule out all except the presence of a ferromagnetic transduction element, such as biologically-precipitated crystals of magnetite (Fe3O4).

Over the past 50 years or so, hundreds of organisms in nearly all branches of the bacterial, protist and animal kingdoms have been found to have the ability to detect and respond to the geomagnetic field. In some animals – such as honey bees – the geomagnetic behavioral responses are as strong as the responses to light, odor or touch. There are numerous reports of strong geomagnetic responses in vertebrates ranging from fish, amphibians, reptiles, numerous birds and a diverse variety of mammals including whales, rodents, bats, cows and dogs – the last of which can be trained to find a hidden bar magnet. In all of these cases, the animals are using the geomagnetic field as components of their homing and navigation abilities, along with other cues like sight, smell and hearing. 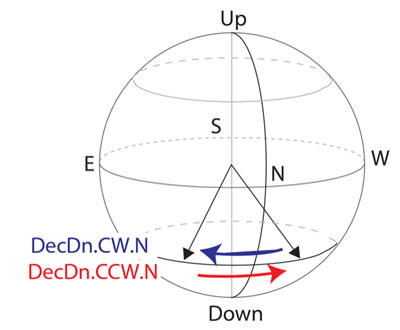 In our new study funded by HFSP, we asked 34 participants simply to sit in our testing chamber while we directly recorded electrical activity in their brains with electroencephalography (EEG). Our modified Faraday cage included a set of 3-axis coils that let us create controlled magnetic fields of high uniformity via an electric current we ran through its wires. Since we live in mid-latitudes of the Northern Hemisphere, the environmental magnetic field in our lab dips downwards to the North at about 60 degrees from horizontal.

In normal life, when someone rotates their head – say, nodding up and down or turning the head from left to right – the direction of the geomagnetic field (which remains constant in space) will shift relative to their skull. This is no surprise to the subject’s brain, as it directed the muscles to move the head in the appropriate fashion in the first place. In our experimental chamber, we can move the magnetic field silently relative to the brain, but without the brain having initiated any signal to move the head. This is comparable to situations when your head or trunk is passively rotated by somebody else, or when you’re a passenger in a vehicle which rotates. In those cases, though, your body will still register vestibular signals about its position in space, along with the magnetic field changes – in contrast, our experimental stimulation was only a magnetic field shift. When we shifted the magnetic field in the chamber, our participants did not experience any obvious feelings.

The EEG data, on the other hand, revealed that certain magnetic field rotations could trigger strong and reproducible brain responses. One EEG pattern known from existing research, called alpha-ERD (event-related desynchronization), typically shows up when a person suddenly detects and processes a sensory stimulus. The brains implicitly direct  attention to the unexpected change in the magnetic field direction, and this triggered the alpha-wave reduction. That we saw such alpha-ERD patterns in response to simple magnetic rotations, both in the pooled data across participants, and also specifically strong responses in several individuals,  is powerful evidence for human magnetoreception. Our participants’ brains only responded when the vertical component of the field was pointing downwards at about 60 degrees (while horizontally rotating), as it does naturally here in Pasadena, California. They did not respond to unnatural directions of the magnetic field – such as when it pointed upwards. We suggest the response is tuned to natural stimuli, reflecting a biological mechanism that has been shaped by natural selection.

This is a highly controversial, and at the same time highly interdisciplinary kind of research topic, for which we had a hard-time to get funded from the federal budget sources. It was the HFSP’s brilliant foresight and actual support which brought us to this major discovery.

Our findings punctuate the ever-lasting controversy, to open up a new phase of research to seek for biological/behavioral functions of the human magnetoreception. The techniques we employed may be generalizable to other projects to “dig out” potential ability of the human brain, and even to reinforce it. In the modern world we are surrounded by various kinds of artificial, strong magnetic fields (such as headsets, airplane cabins, MRI scanners, etc.), so our result raises new questions as to how those factors affect magnetoreception, which may in turn partly explain the huge individual differences.

This video shows the changes in alpha wave amplitude—a measure of whether the brain is being engaged or is in a resting or "autopilot" mode—following rotations of an Earth-strength magnetic field. On the left, counterclockwise rotations induce a widespread drop in alpha wave amplitude. (The darker the blue color, the more dramatic the drop.) No drop is observed after clockwise rotation or in the FIXED control condition in which the field did not rotate.

Maggie Villiger, The Conversation with Shimojo, Wu, and Kirschvink