We have used state-of-the-art electron microscopy to reconstruct the full brain of eight C. elegans individuals to learn how they change with age. This is the first time that the entire structure of the brain is individually deduced and compared across developmental stages from birth to adulthood. These findings have powerful implications for understanding the fundamental rules that influence the brain’s developmental maturation.

When C. elegans is born, it has only 218 neurons. By the time that it becomes a mature adult, the worm’s nervous system consists of 300 neurons. Every neuron has its unique name, with the same neuron identifiable among individual worms. We use C. elegans to examine how each neuron in the brain changes its connections, or wiring, throughout the worm’s lifetime. We have discovered a few structural properties in the newborn’s brain that allow us to correctly predict the wiring patterns of the mature brain. 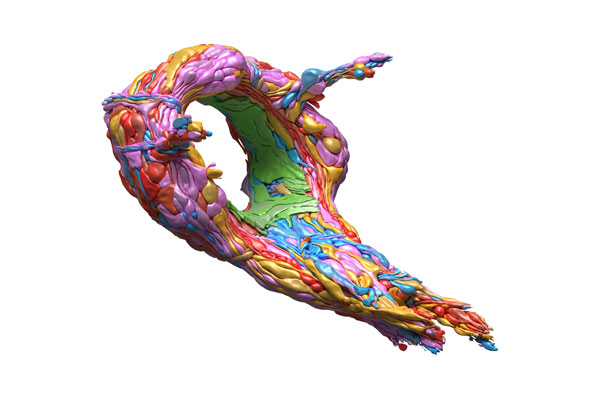 Using C. elegans, a historic milestone—deciphering the wiring map of any animal—was achieved by John White and his colleagues at the MRC in Cambridge more than 30 years ago. Due to the technical limitations at that time, this map was a composite of partial maps from different body regions of different worms, some at different developmental stages. This has prevented us from determining wiring changes during development or in individual brains.

By examining every connection for every neuron, muscle, and glia, we found that the overall geometry, neurite structures, and neurite appositions barely change after birth. New connections are selectively added as animals grow older. Over the course of development, these additions maintain the brain’s central decision-making circuitry, whereas sensory and motor pathways become substantially remodelled.

By analyzing connections among neurons, like for wires in a computational network, we discovered that the new additions have specific patterns, and their collective changes serve one purpose: enabling more effective information processing. Through identifying some key patterns of the brain’s development, we found that substantial connectivity differences make each brain unique.

Understanding the intrinsic differences in wiring flexibility in different parts of the brain, and the vast wiring differences among even genetically identical individuals, has general implications in developmental and connectomics studies.

This work was the result of a cross-disciplinary international collaboration. HFSP has made a profound impact in its success by funding this ambitious project and its core team from the project’s inception, fostering the collaboration that brought our initially proposed project to completion eight years later.