T cells are a crucial component of the immune system and when properly activated they can target and kill cancer cells. Unfortunately, cancers deploy several mechanisms to evade destruction by the immune system. One of the most notable pathways is through immune checkpoint molecules (such as PD-1 and CTLA-4). Expression of PD-1 and CTLA-4 on T cells coincides with a state of T cell dysfunction that impedes killing of cancerous targets. While the development of immunotherapies blocking these checkpoint molecules have revolutionized cancer therapy, it is unclear how dysfunction interferes with T cell killing ability. We tackled this question in our HFSP supported study recently published in the Journal of Experimental Medicine. Surprisingly the answer depends on cell stickiness. 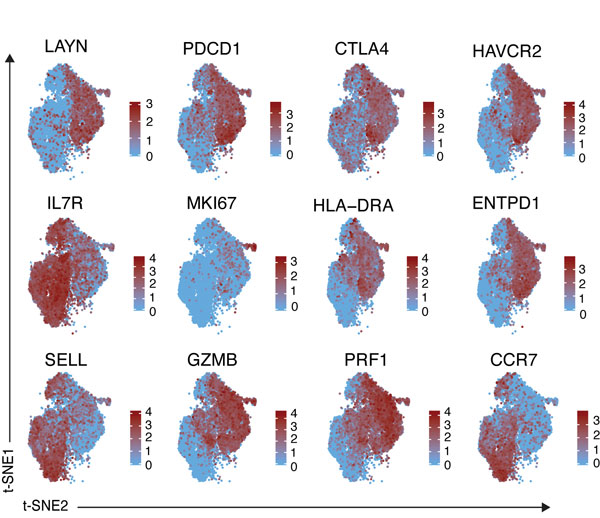 To begin to understand the basic biology of T cell dysfunction, we profiled the individual gene expression pattern of thousands of tumor infiltrating T cells isolated from melanoma patients. Notably, one of the most highly upregulated genes among dysfunctional T cells coded for a protein of unknown function. This molecule, layilin, has previously been associated with cellular adhesion but it was unclear if it contributed to the activity of tumor infiltrating T cells. We, therefore, tested if there was a role for layilin in cancer progression by genetically blocking its expression in both mouse and human T cells. Mice with T cells lacking layilin grew larger tumors. Similarly, layilin deletion impaired the tumor killing ability of human T cells cultured with a melanoma cell line. Thus, not only does layilin have a functional role on T cells but it actually amplifies the ability of these cells to target cancers.

Cellular adhesion is necessary for T cell accumulation within tumors and is also directly involved in the elimination of cancer cells. To determine if layilin modulates cellular adhesiveness we tested the ability of layilin deleted human T cells to stick to surfaces under static conditions. Normal cells maintained significantly better adherence compared to those deficient in layilin. In addition, we found that loss of layilin reduced activation of the integrin molecule, LFA-1. Integrins are a potent class of adhesion protein but they require activation before being able to mediate cell-cell interactions. Interestingly, the two proteins closely associated together suggesting that layilin directly promotes LFA-1 activation. This in turn enhances T cell adhesion which allows increased accumulation within tumors and improved efficiency in targeting cancer cells for elimination.

As we identified layilin expression in melanoma patients and dissected molecular mechanisms using human T cells, our findings have immediate relevance to human cancer. Layilin is a potential therapeutic target and its manipulation could be complementary to current immunotherapies. More broadly, however, our study uncovers a previously unknown molecular pathway that modulates T cell adhesiveness in tissues. Determining how layilin expression is controlled on T cells may unlock new insights into tissue immune function and human diseases beyond cancer.

Link to article in the Journal of Experimental Medicine
PubMed link