Four secret rules that dung beetles use to roll a ball

The dung beetle is a particularly strong insect that can roll a large dung ball across the savanna. How can it achieve this? Through behavioral experiments and statistical analysis, we provide insight into the principles of leg coordination in the beetle’s ball rolling behaviour and its underlying biomechanical rules.

The dung beetle has six legs and uses them for many different purposes. It uses them to walk and roll the ball. While the leg coordination in standard walking has been studied extensively, little research has been done on the leg coordination during large object transportation (i.e., a combination of locomotion and object manipulation), like the ball rolling behaviour of dung beetles. In this study, we have investigated the secret rules behind dung beetle ball rolling behaviour. Realizing the rules can provide a guideline to 1) understand how dung beetles simultaneously and dynamically interact with different substrates (e.g. ground and ball), and 2) decode the special qualities of dung beetles and transfer these ideas to the robot design to achieve multiple functions (walking and transporting/rolling an object), as well as solving complex motor control problems in systems having many degrees of freedom.

“Imagine if we could create a similarly effective robot that could walk and transport an object ten times its own weight, like the dung beetle”. 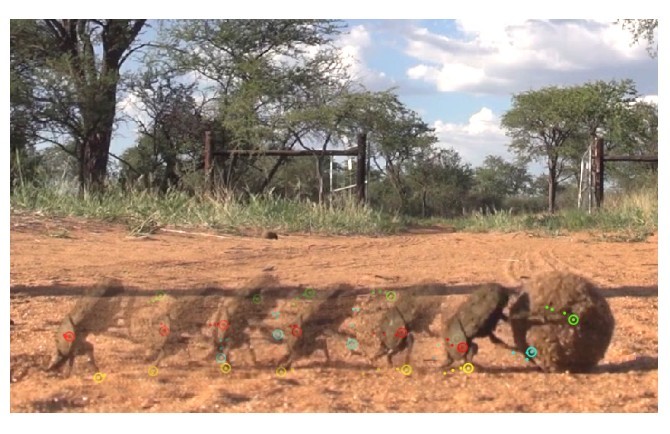 Figure 1: Dung beetle’s ball rolling behaviour. The positions of the body and the front, middle, and hind legs of a dung beetle are marked with red, yellow, turquoise-blue, and green dots, respectively.

When rolling a dung ball, the dung beetle Scarabaeus (Kheper) lamarcki uses its front legs to push the body off the ground to generate the force required to roll a dung ball backwards. At the same time, their middle and hind legs step on the dung ball. Each leg seems to move in a steady, cyclic pattern. We extracted leg movement during the ball rolling from video recordings and performed statistical analysis to find underlying rules. From our leg gait similarity analysis technique, we successfully identified four important rules.

The first rule describes the alternation of the front legs. The second rule describes the symmetric gait between the middle legs and their contralateral hind legs. The third rule describes that a pair of middle and hind legs on either the ipsilateral or contralateral side rarely lift together. The fourth rule is inspired by Wilson’s rule describing a protraction wave in cockroaches. This rule can also be used to describe the protraction wave in the middle and hind legs of the dung beetle during ball rolling. The proposed leg coordination rules can also be applied to describe other rolling conditions, such as rolling a ball with a lighter weight (approximately 50% of the baseline ball). Taken together, our results provide insight into the principles of leg coordination in the beetle’s ball rolling behaviour. The proposed rules can be used as a basis for further investigation into ball rolling behaviours on more complex terrains (e.g., uneven terrain and slopes) as well as to control bio-inspired ball rolling robots.

This work was performed by researchers from the University of Southern Denmark, Denmark, and Vidyasirimedhi Institute of Science and Technology, Thailand, led by Poramate Manoonpong, Kiel University, Germany, led by Stanislav Gorb, Stockholm University, Sweden, led by Emily Baird, and Lund University, Sweden, led by Marie Dacke. The support of HFSP played a significant role in this work. It has been instrumental to achieve this insight which can be used as a basis to push robot technology beyond the state of the art; thereby creating a next-generation robot with agility and versatility for real world applications, where mobile robots with versatile functions like search and rescue, transportation and exploration, construction are in high demand.

Link to article in Scientific Reports