Genomically apart, but acting together: gene coupling in living embryos

Biological processes such as growth, responses to changing environments, or cell-fate specification rely on the coordinated activation of subsets of genes. Often, these genes have related and even overlapping functionalities, requiring genomic strategies that facilitate transcriptional co-regulation in space and time. 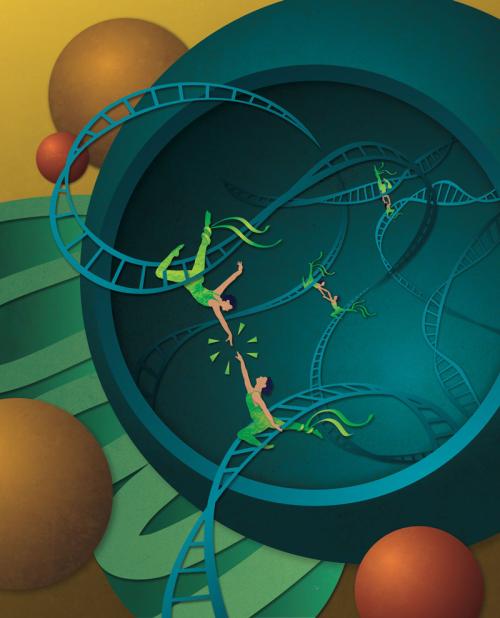 The hallmark of coordinated gene regulation is the bacterial operon: genes involved in a common process are clustered together (transcribed as a polycistronic mRNA) and regulated by one switch, near the core promoter. This ensures timely co-expression of genes that are required for a particular environmental setting. However, gene regulation in higher eukaryotes is thought to substantially differ from this prokaryotic strategy. Individual genes display complex spatiotemporal activities afforded by multiple regulatory sequences, namely enhancers, which can reside at large genomic distances from the target gene. Eukaryotic genomes are riddled with functionally related genes, yet it is unclear if and how their activities are coordinated.

Figure: In this illustration the acrobats represent distant genes that pair together in space, despite large genomic distances, and engage in coordinated gene activity. Image by João Raimundo and Jeremy Guay at Peregrine Creative for Princeton University.

In the rapidly developing fly embryo, many of the key developmental genes appear as paralogs, with overlapping expression patterns (i.e., expressed in a common developmental stage and cell type). While this suggests co-regulation, these genes are often tens to hundreds of kilobases apart. By combining genomic approaches with live transcription imaging, we find that such paralogous pairs (or trios) show extensive physical and functional associations. A genome-wide survey (via a high-resolution chromatin conformation assay, Micro-C) reveals pervasive 3D interactions between distant paralogous genes. We can pinpoint connectivity to promoter-proximal sequences that we designate as ‘tethering elements’. These are found to be distinct from classical regulatory elements, such as core promoters, enhancers, or insulators.

Simultaneous transcription imaging of an interconnected gene pair demonstrates the genes’ physical proximity and tight co-regulation within individual nuclei. CRISPR-based editing identifies a shared enhancer, positioned near one of the genes. Its deletion results in loss of activity of both the proximal and the distal gene in a common expression domain. Despite the large distance between the genes (e.g. ~250 kilobases), and their employment of the same enhancer, we observe co-occurring transcription initiation events (within 90 seconds) in single nuclei. These events raise the possibility of a shared transcriptional micro-environment. Transcriptional coupling of the genes is further underscored by manipulations to the promoter-proximal tethering elements. These manipulations alter the transcriptional dynamics of the interconnected genes over large genomic distances.

The observation that a promoter-proximal region of one gene can influence the activity of a co-regulated gene ~250 kilobases away challenges classical views as to the modular nature of eukaryotic genomes. Reminiscent of the common control switch implemented by a bacterial operon, our study opens the possibility that eukaryotic genomes might harbor ‘topological operons’. We certainly need to consider this long-range regulatory interdependence when in search of disease-causing mutations, corresponding therapeutics, and synthetic biology-based modulation of gene expression.

The HFSP fellowship allowed me to shift focus from short-range regulation of gene expression (which I studied in yeast during my PhD) to mechanisms employed in complex genomes of multicellular developing organisms. It enabled me to expand my skill set (using live imaging in addition to large-scale sequencing approaches), to develop experimental and computational tools, and to work in a collaborative multidisciplinary environment.