Individual cells cooperate in colonies by communicating via ultra-fast flows

The exchange of signals between organisms occurs frequently in nature: dogs bark in the street together, crickets chirp in unison, and fireflies flash light in harmony. This communication serves diverse biological functions in different ecosystems either through immediate benefits like warnings for predators, or more long-term advantages like collective decision making. 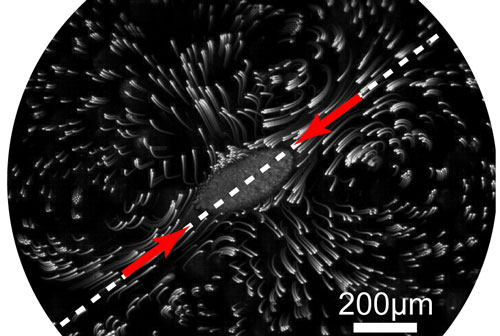 In their latest paper published in Nature, HFSP fellow Arnold Mathijssen and coworkers show that not only developed life forms display this complex behavior but that unicellular protists can also exchange fast signals to serve a shared functionality within their colonies. The model organism they studied, Spirostomum ambiguum, can contract its cell body within the blink of an eye. This rapid acceleration is equivalent to 14 g-forces, which generates strong vortex flows that can trigger neighbouring cells. Subsequently, these neighbours also contract and convey the signal further across the entire colony. The speed of these ‘hydrodynamic trigger waves’ reaches over a thousand times of their individual swimming velocity, and this mechanism is robust because the signal never loses its amplitude. Whereas the long-term advantages of this communication are not yet fully understood, a short-term benefit could be the deterrence of predators much larger than an individual cell, by a synchronized toxin release across a community. 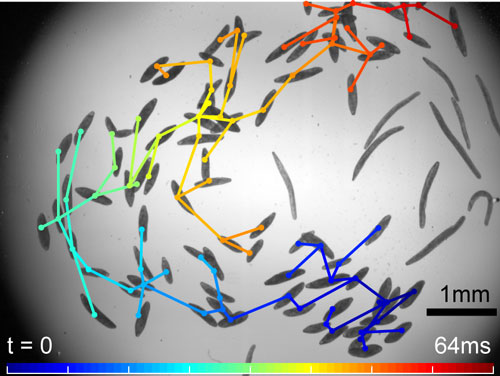 Figure 2: A hydrodynamic trigger wave propagating though a colony. The connectivity graph shows which cell triggered which, and colours indicate time. Image courtesy of Dr. A Mathijssen.

These results contribute to our understanding of how organisms can communicate with each other via liquid flows, but also how large forces are generated and controlled in living systems. This is important for developing new technologies and materials that can sense and respond to quickly changing conditions.