Larval zebrafish as a model for perceptual decision-making

Larval zebrafish as a model for perceptual decision-making

During perceptual decision-making, animals need to accumulate sensory evidence over time but the underlying neural processes remain poorly understood. Here we combine behavioral experiments and whole-brain imaging in larval zebrafish to build circuit models that are well-suited to mechanistically implement the behavior.

Whenever we want to go out for dinner with friends and pick a nice restaurant, we need to carefully evaluate and discuss all the available options. This often leads to a certain degree of ambiguity or conflict and, hence, choosing the right action is a challenging task. A general solution to many such decision-making problems is the integration of information over time towards a decision threshold, which is often described by so-called bounded drift-diffusion models. These models faithfully explain several aspects of the behavior, including the response delay distribution and decision accuracy, but it remains poorly understood where in the brain this happens and how the underlying processes are mechanistically implemented. A popular decision-making paradigm is the random dot motion discrimination task –– originally developed for humans and primate models –– in which subjects or animals need to report their perception of coherent motion direction within a mostly randomly moving cloud of dots. Despite the success of these studies for the understanding of the cognitive principles involved, the dissection of the neuronal mechanisms in humans or primates remains experimentally very difficult. 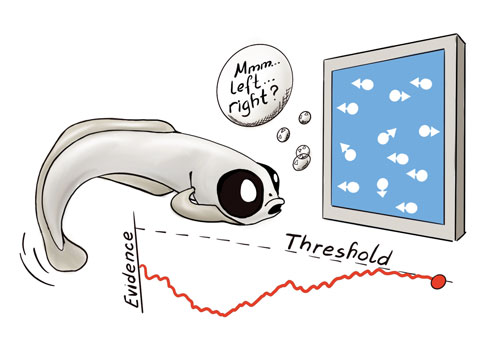 An artist’s depiction of how larval zebrafish make decisions about the direction of coherent motion within a cloud of mostly randomly moving dots. Artist: Mariela Petkova.

In their recent paper, Bahl and Engert find that a much simpler animal model, the vertebrate larval zebrafish, can also integrate motion evidence over time. Through whole-brain functional imaging at cellular resolution, the authors identify several prominent centers at different locations across the nervous system that are likely involved in the underlying computations. In particular, their experiments indicate that the anterior hindbrain plays an important role. They find that this area is largely composed of three functional cell types: a cluster of integrator neurons that slowly accumulate coherent motion over time as well as a set of neurons representing a dynamically evolving decision threshold. These two clusters compete antagonistically in such a way that whenever excitation from the integrator cluster exceeds inhibition from the dynamic threshold cluster, a third – a motor command – cluster becomes active and initiates a swim.

In summary, Bahl and Engert have found that larval zebrafish can be used for the study of perceptual decision-making and have identified a simple circuit motif in the anterior hindbrain that is well-suited to mechanistically implement the underlying computations. Their work lays the foundations to employ the rich molecular-genetic toolkit and connectomics approaches that are becoming available for the larval zebrafish animal model. These techniques will now enable to systemically and in great detail dissect the neural basis of perceptual decision-making.