A link between breast cancer and bone growth 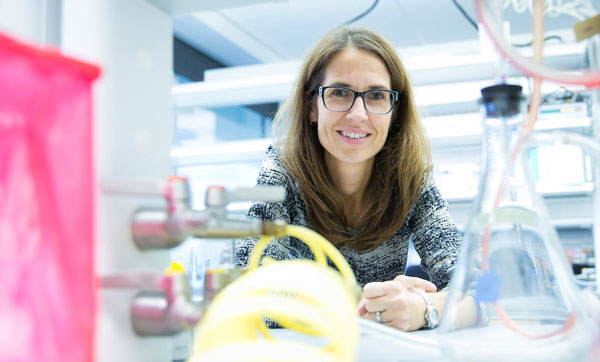 However, therapeutic options to interfere with this process are scarce as the underlying mechanisms remain unclear. A recent study integrating materials science and cancer biology has identified that breast cancer cells secrete biomolecules that initially increase rather than decrease bone mass. The team co-led by HFSP awardees Peter Fratzl and Claudia Fischbach further identified that this increase in bone mass was due to activation of abnormal bone growth, which they believe could serve as a defense mechanism to counteract metastasis formation in early stages of the disease. The team will test this possibility in future studies. You can read more on this story in an article by David Nutt for the Cornell Chronicle (below).

Breast cancer poses a substantial threat as it spreads to other organs, often lying in wait for years in these tissues and recurring without warning. Bones are a prime target, but the mechanisms that influence whether skeletal metastasis will develop or not remain poorly understood.

A collaboration between researchers at Cornell and the Max Planck Institute (MPI) of Colloids and Interfaces in Potsdam, Germany, used an innovative combination of biological and materials characterization tools to reveal that bones may actually grow in response to signals from a distant breast tumor – possibly as a preemptive defense mechanism against metastasis. The findings could point the way to future diagnostic tests and therapeutic treatments. 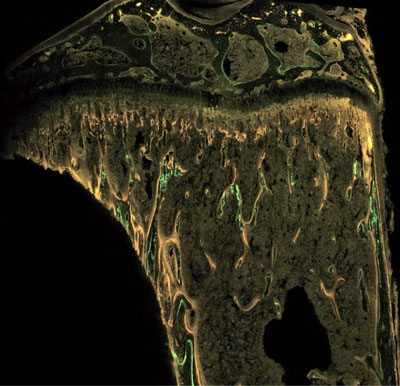 Figure: This micrograph, taken at the Max Planck Institute of Colloids and Inferfaces, shows a bone cross-section labeled with fluorescent dyes to measure the dynamics of bone formation.

The Cornell team was led by Claudia Fischbach, the Stanley Bryer 1946 Professor of Biomedical Engineering, whose lab focuses on understanding the biological and biophysical mechanisms that influence cancer development, progression and therapy response.

“Clinically, breast cancer spreads to bone quite frequently, but it’s not really well understood how it happens, and there aren’t many ways to predict it,” Chiou said. “We were interested in determining if there is a signature, or some way that we can detect changes in the bones prior to the formation of metastasis.”

Distant organs are made vulnerable to the spread of cancer when tumor cells secrete various signaling molecules, or factors, into the circulation. The researchers collected these factors and injected them into mice. Then they analyzed the mouse bones with a range of biological surveys, such as RNA sequencing, which can show how gene expression changes in bones, and other traditional pathology techniques. These methods didn’t reveal anything new or noteworthy, and normally the story would’ve ended there.

However, thanks to the materials expertise provided by the MPI team, led by the paper’s co-senior author Peter Fratzl, the researchers turned to a series of high-resolution imaging techniques – more common in the physical sciences – to scrutinize how the structure and composition of the bone’s microenvironment changed.

They used micro-computed tomography to study the bone architecture; Raman imaging to scan the bone’s chemical spectra; and small-angle X-ray scattering (SAXS) to reveal mineral properties. Most crucially, they employed a technique called dynamic histomorphometry, in which fluorescent dyes are integrated into the bone at different intervals and essentially create time stamps that show the rate of bone formation.

The researchers were surprised to find that bone exposed to a tumor’s secreted factors actually grew thicker by adding more layers of mineralized tissue at a faster pace.

“Breast cancer patients with bone metastasis typically present in the clinic with bone degradation, as metastatic tumors activate bone-degrading cells and inhibit bone-forming cells,” said Fischbach, who also serves as co-director of the Cornell Center on the Physics of Cancer Metabolism. “The interesting finding here is that we see the opposite. Bone is forming more and in a different way in a scenario that mimics the early stages of disease development. It may be a defense mechanism of our body trying to prevent metastasis formation.”

Such a protective mechanism could have important applications in diagnostic analysis as well as for generating therapeutic treatments.

“This study demonstrates how engineering and physical sciences approaches are needed to really understand the full spectrum of changes that tumors might introduce to an organism,” said Fischbach, whose previous collaborations with Lara Estroff, professor of materials science and engineering, helped set the stage for the current study.

“This is something that wouldn’t have been possible if it wasn’t for the combination of interdisciplinary toolsets,” Fischbach said. “Biology alone wouldn’t have led us to these findings.”

The research was supported by the Human Frontier Science Program, which facilitated the international collaboration with a $1 million, three-year grant, and the National Cancer Institute of the National Institutes of Health.