Mosquitoes are born to buzz

Mosquitoes have unique wing motions with a very high flapping frequency and a small stroke angle. A study, recently published in Bioinspiration and Biomimetics, found that these unique wing motions are extremely efficient for generating high-intensity wing buzz, which is an important mode of communication between mosquitoes.

Mosquitoes have unique wing motions and a distinct wing shape compared to other flying insects of similar size such as fruit flies (Drosophila). Firstly, their wing flapping frequency is remarkably high (>700 Hz), and this generates a high frequency wing buzz, a sound that we can find annoying. Secondly, the wing stroke angle of the mosquito is much smaller than for other insects. The stroke angle of the mosquito (Culex, male) is only about 40 degrees, whereas it is about 150 degrees for the fruit fly. The recent study by Bomphrey et al (Nature 2017) suggested that mosquitoes exploit fast wing rotation at high flapping frequency to generate additional lift force. The authors also noted that this mechanism is well suited for mosquitoes’ high aspect ratio wing shape. However, the question why mosquitoes have evolved to employ such unique flapping remains unanswered. 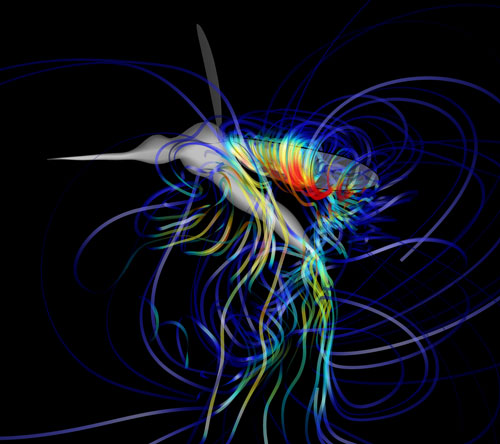 Figure: Stream traces of airflow around the flapping wing of a mosquito. Flow visualization with the simulation result. Mosquito body and wing models are adopted from Bomphrey et al. (Nature, 2017).

It has been known that mosquitoes use the wing buzz as a means of communication during courtship since they swarm in low-light conditions where visual perception is of little use. We hypothesized that their unique wing motions are associated with the generation of the wing buzz. In the current study, therefore, we investigated not only the aerodynamics but also wing buzz generation in mosquitoes (Culex, male) using computational fluid dynamics and aero acoustic modeling.

This study provides insights into the generation mechanism and energy expenditure of wing buzz in mosquitoes. It also helps to explain why mosquitoes might have evolved to have such unique wing shapes and wing kinematics. These findings will greatly help the investigation of acoustic communications in mosquitoes, which is very important in the lifecycle of these insects, many of which are vectors for some of the most devastating diseases that afflict mankind. The project has direct implications for control of disease vectors. Our understanding of this acoustic communication between mosquitoes could enable us to devise ways of disrupting this communication, which in turn could diminish the reproduction rates of these vectors and in doing so, diminish rates of infection.

Link to article in Bioinspiration and Biomimetics
PubMed link