Nuclear mechanics at the organ-meristem boundary

The emergence of plant shoot organs involves various signaling pathways including hormone, gene and microRNA regulation. We find that organ emergence induces nuclear compression and chromatin changes at the organ-meristem boundary, in a mechanical feedback loop.

Tissue folding in plants involves tight regulation linked to biochemical signals such as hormones and specific gene expression profiles. In plants, as in animals, development is also under the control of mechanical forces. This is particularly apparent at the boundary region of the meristem where organs are emerging from the shoot apical meristem, and where differential growth generates mechanical conflicts. Targets of such mechanical forces include the cytoskeleton and cell wall synthesis (1). The nucleus, being a physical object too, is also impacted by such mechanical cues. 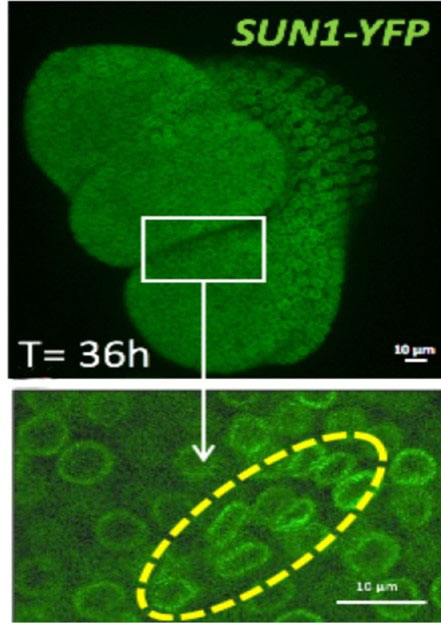 Figure: 36 hours after the shoot apex emergence from the shoot apical meristem (white rectangle), the shape of the nuclei is changing at the boundary meristem/organ (yellow line).

To investigate the mechanical influence on cell nuclei, the fluorescent nuclear envelope marker SUN1 was used to quantify nucleus morphometry. At the boundary region under compressive stress, the nucleus appears gradually flattened as the neighboring organ is growing. In parallel, the expression of the linker histone H1.3 (2) was induced in the region where nuclei are the most deformed. This could be mimicked by mechanical compression of the whole meristem with a micro device, resulting in ectopic H1.3 induction.

At chromatin level, DAPI staining of the nuclei showed a decreased number of the constitutive heterochromatin foci present at chromocenters in the deformed nuclei. This was accompanied by a decrease of the level of DNA methylation signal at the organ boundary, with a minor contribution of H1.3.

The support of HFSP in this work has been instrumental to establish pipeline analyses of nuclear mechanics. We will further investigate the link between microtubule and chromatin architecture at the nuclear envelope at the single cell level in response to mechanical stress.

Mechanotransduction in the plant nucleus