To carry out their functions, organs must form with the same size and shape despite growing in a fluctuating, unpredictable environment. A flower bud is protected by four interlocking outer-most, leaf-like organs called sepals; we have shown that these four sepals begin growing at carefully synchronized times, which lets them keep the same size throughout their growth.

Robustness of organ size is the ability to form organs with the same size during development despite randomness in gene expression, variability in cell growth, and changes in the environment. Robustness in size is important. Uncontrolled organ growth leads to many human diseases, including hypertrophy and cancer. Robustness in fruit size makes it much easier to pack and ship fruit to market. Despite its importance, mechanisms that maintain size robustness remain poorly understood. Our current understanding comes primarily from fruit flies, where it has been shown that the two wings of a fly are the same size because the whole animal pauses its development and waits for the primordium of an undersized wing to catch up and reach the correct size of its neighboring wing primordium. In Arabidopsis flowers, we have uncovered a different mechanism which involves synchronized initiation and termination of development. We have chosen to study this question in Arabidopsis flowers because each Arabidopsis plant produces more than 50 uniform flowers, which each have four sepals with the same size and shape. This allows us to measure robustness in sepal size within a single plant. The role of sepals is protective. To enclose and protect the flower bud, the four sepals must maintain the same size and shape throughout their growth and development. Thus, unlike fly wings which merely need to be the correct size at the end of their development, Arabidopsis sepals need to be the correct size throughout their development. 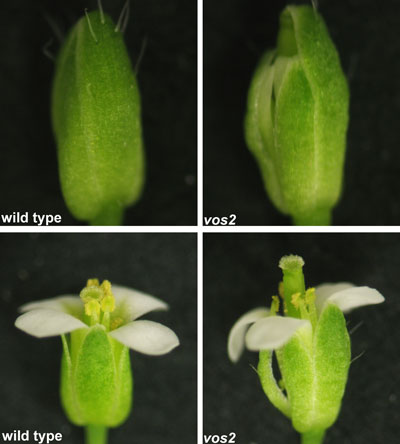 Figure 1: Flower buds (top) and blooming flowers (bottom) for normal “wild type” plants (left) and vos2 mutants (right).  Note that in the vos2 mutants, the sepals are not the same size at either stage, and consequently the flower bud is open. Image credit: Mingyuan Zhu.

To understand how Arabidopsis sepals reach the same size and shape, we identified a variable organ size and shape 2 (vos2) mutant that disrupts this process. By imaging living vos2 plants, we found that the variability in sepal size arises very early, with variably delayed timing of initiation of the sepals. We also found that these initial defects cause cascading defects throughout sepal development: late-initiating sepals cannot catch up with other sepals, and always remain smaller. Thus, sepals within a single vos2 mutant flower have variable sizes throughout their growth and fail to enclose and protect the flower bud. When functional, the VOS2 gene ensures that the sepals initiate almost synchronously, and therefore can maintain the same size.

Since we found that nearly synchronous timing of initiation in normal flowers is crucial for maintaining the same size organs, we next asked why sepal initiation was delayed in vos2 mutant flowers. Because interplay between the plant hormones auxin and cytokinin is known to control the timing of floral primordium initiation, we tracked the distribution of auxin and cytokinin signaling throughout sepal initiation in living wild-type and vos2 flowers. Our imaging indicated that both auxin and cytokinin signals need to be focused at the positions where the sepals will initiate. This focused and stable hormone signaling then triggers tightly localized cellular outgrowth of the sepal. Outgrowth occurs through mechanical softening of the cell walls, which we observed using atomic force microscopy. In vos2 mutants, hormone signaling is not precisely localized, the cell walls remain stiffer, and sepal outgrowth is delayed, which results in smaller sepal size. We found that the VOS2 gene encodes a transcription factor that is very likely to regulate networks of genes required for sepal outgrowth; therefore, in our next study we are conducting experiments to identify which genes are regulated by VOS2, by which we hope to further determine how VOS2 promotes sepal size robustness. In conclusion, we found VOS2 coordinates the timing of sepal initiation by focusing hormone signaling and promoting cell wall softening. The precise coordination of sepal initiation ensures sepal size robustness throughout development of the flower. We are now collaborating with broccoli breeder Thomas Björkman to determine whether we can apply this new mechanism for robustness to breeding more robust flower size in broccoli, which is not marketable if the flower buds are not the same size. 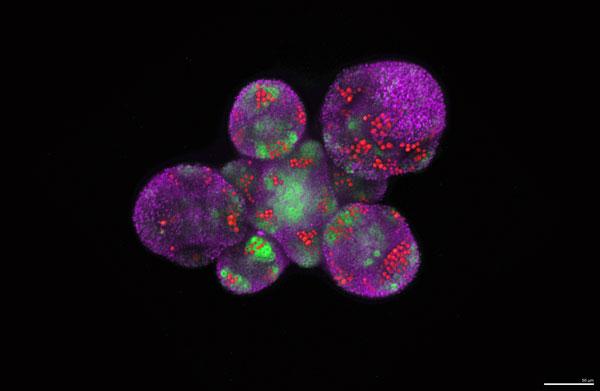 Figure 2: A picture of a cluster of young flowers before and during sepal initiation showing the patterns of hormone signaling giving rise to sepal initiation. The four sepals will form at the four positions around each flower where the hormones auxin (shown with red) and cytokinin (green) are starting to signal. Image credit: Mingyuan Zhu.

Our HFSP grant “From stochastic cell behavior to reproducible shapes: the coordination behind morphogenesis” was essential for beginning this project and bringing together the international interdisciplinary team that made this work possible. The analysis of the vos2 mutant was conducted by first author Mingyuan Zhu (PhD student funded on the grant) in co-investigator Adrienne Roeder’s laboratory at Cornell University. Principal investigator Arezki Boudaoud, who is one of the corresponding authors of this paper, was instrumental in the conception, design, and interpretation of this study. In addition, Mingyuan Zhu visited Arezki Boudaoud’s laboratory at ENS Lyon to collaborate on the atomic force microscopy measurement of cell wall stiffness. He also visited co-investigator Olivier Hamant’s laboratory to analyze hormone distribution patterns. Quantitative image analyses were conducted with software developed by co-investigator Richard Smith and his group, which was at the Max Planck Institute for Plant Breeding Research and has since moved to the John Innes Center. Statistical analyses were developed and conducted with expertise from co-investigator Chun-Biu Li at Stockholm University. This project was also funded by the National Institutes of Health.