Home / News & Events / Parasite shape is essential to cause malaria

Parasite shape is essential to cause malaria

Malaria parasites transmitted by the mosquito vector are slender and curved cells optimized for very rapid migration. Their shape is kept by an exact number of scaffolding filaments called microtubules. By changing the numbers of microtubules, parasites of different shape were generated and found to be less efficient in causing infections.

Malaria is a disease caused by the unicellular Plasmodium parasite and is transmitted by mosquitoes. To survive in its hosts the parasite adapts its shape and behavior to its respective environment, which is as diverse as skin, liver, blood, bone marrow, mosquito stomach and salivary gland. Hence Plasmodium genes can be active at different stages during the complex parasite life cycle. Within our HFSP Young Investigator grants we investigated the cytoskeleton of the parasite, which is important for the shape and motility of the parasite as well as for its capacity to multiply and to pass through tissues and enter host cells. Due to the large evolutionary distance between Plasmodium and more classically investigated cells such as yeast or higher eukaryotic cells, we hoped both to gain fundamental biological insights into the general function of the cytoskeleton and to reveal targets for intervention against the parasite. 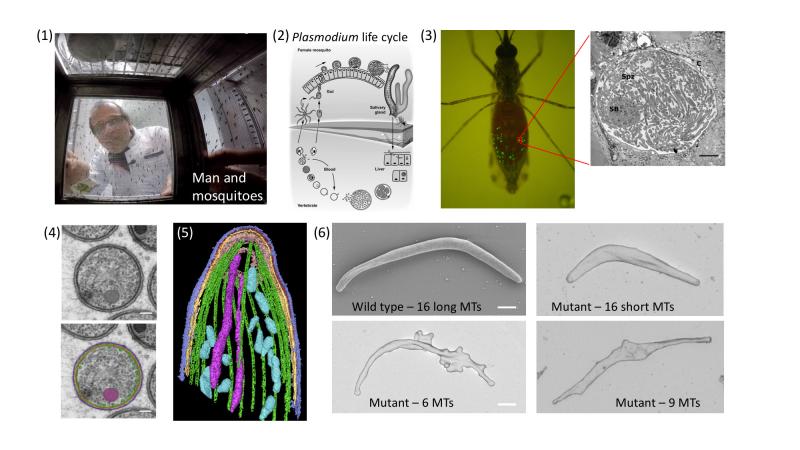 Figure: (click on image to enlarge) Top row from left: (1) a GoPro camera takes a photo from within a mosquito cage. (2) Plasmodium life cycle. Note the formation of sporozoites within cysts at the mosquito gut wall. After formation, sporozoites enter salivary glands from where they are transmitted to men (or laboratory mice). In the skin the sporozoites have to quickly migrate out of the wound and to enter a blood vessel. Next they enter liver cells to differentiate and multiply, before eventually entering red blood cells and causing disease. (3) A mosquito showing in green the cysts where sporozoites develop. Inset: electron micrograph showing sporozoites within a cyst. Bottom row from left: (4) A cross section with microtubules highlighted in green (bottom image). (5) A 3-dimensional tomographic view of the sporozoite front with 16 microtubules shown in green. (6) The electron micrographs show four sporozoites with different numbers of microtubules indicated. Note their different forms. Scale bar: 1 micrometer.

The cytoskeleton in Plasmodium features two highly conserved elements: actin filaments and microtubules. Remarkably, the actin filaments are much more unstable and very short compared to traditionally investigated cells, while the microtubules are unusually stable. Microtubules are long hollow tubes made from two very similar proteins, alpha- and beta-tubulin. They can arrange in different assemblies to build, for example, the core structure of cilia and flagella, which are essential for the function of our lungs and sperm. They are also essential to separate the chromosomes during cell division. Furthermore, within cells they serve as tracks to transport vesicles and organelles, and they help to position the nucleus and to maintain cell shape. In mammalian cells microtubules often grow and shrink rapidly. Hundreds of microtubules can be observed within a cell and their number varies widely, even within one cell type. In stark contrast, many protozoans show a much smaller and very well-defined number of microtubules. In the case of Plasmodium, these can vary from 3-4 in the parasite forms that infect red blood cells to 16 in the forms that are transmitted by the mosquito. In the latter case, they are essential to stabilize the characteristically curved cell shape.

Plasmodium has two genes that make slightly different versions of alpha-tubulin. In our study we showed that only one of them is important for the formation of sporozoites, the forms of the parasite that grow within the mosquito and are transmitted during a bite. Without this alpha-tubulin the parasite cannot make microtubules during sporozoite formation. Remarkably, the parasites were still able to separate their genomes and start forming sporozoites. However, these soon collapsed like a tent that has no poles. Reintroducing different versions of the alpha-tubulin genes resulted in parasite lines that showed different numbers of microtubules. While normally the sporozoite has 16 microtubules, we generated parasites that show 6, 9, 11 or 16 but short microtubules. Investigations by electron, fluorescence and video microscopy revealed that at least 10 microtubules are needed to make a sporozoite infectious. Mathematical modeling suggested that reduced gene expression was the basis for the varied numbers, which could be confirmed experimentally. Hence, we managed for the first time to precisely tune the number of microtubules within a cell and to determine their functionality. We therefore achieved our initial aim of revealing new biology. Whether our approach can also be used to target microtubules with specific drugs will be investigated in future work.

HFSP funding helped this project because it is so flexible. The key work, done by the first author, was funded by a PhD fellowship. However, that fellowship had no money for consumables, animals or microscope usage, and it also could not pay for the other students whose work was essential to help Benjamin Spreng carry out his experiments. These students became shared second authors on the paper. With the HFSP grant, it was easy to finance this diverse mix of activities and to achieve our goals and to publish.