Proteins are the building blocks of life. But single genetic mutations can cause proteins to deviate from their normal assembly plan. Such is the case with sickle-cell disease, in which a point mutation triggers the self-assembly of hemoglobin into long, stiff filaments that elongate red blood cells and impair their function. Now, Dr. Emmanuel Levy’s team has shown how proteins that are symmetrical in structure, like hemoglobin, are predisposed to stack together into multi-protein assemblies. The team’s experimental results, which have implications for both human health and bio-based nanotechnology, demonstrate how an entire class of proteins is prone to dramatic transformation in response to the smallest genetic change. Such proteins, in other words, live their lives on the evolutionary “edge”. 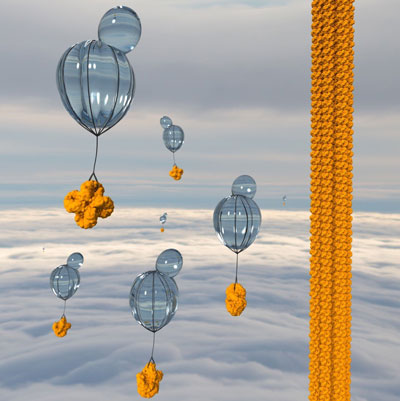 Symmetric protein complexes are made of identical units; since these units are produced from the same gene, a single genetic mutation will be repeated multiple times in the complex.

At each point in which the mutation occurs, a uniform change in structure appears as well, creating a matched set of LEGO-like protein building blocks, capable of fitting together exactly. Mutations creating sticky patches and repeated on opposite sides of the complex can induce their stacking into long protein fibers. Unlike amyloid-like protein fibers, the complexes in these stacks do not change shape or unfold in order to assemble. The stickiness occurs because the mutation substitutes an amino acid that is normally hydrophilic – “water-loving” – with one that is hydrophobic – “water-hating.” In the watery environment in which proteins move, the hydrophobic regions on those proteins prefer to interact with one another, like foam bubbles in water.

The team – Hector Garcia-Seisdedos, Charly Empereur-Mot, Nadav Elad and Emmanuel Levy – initially worked with a symmetric protein complex made up of eight identical units.  They switched one hydrophilic amino acid for a hydrophobic, “sticky,” one, and confirmed the resulting self-assembly using electron microscopy.  Later, they mutated 11 additional proteins known to be symmetrical—creating 73 different mutations in all—and introduced them into baker’s yeast cells, adding a fluorescent protein tag to enable their visualization (see Figure 2).

Figure 2: Yeast cells producing a bacterial symmetric protein complex with eight units. When it is not mutated (left), the complex diffuses freely inside the cell, but a single mutation (right) triggers its assembly into long filaments.

Observing the yeast cells as they grew (see video below), the researchers found that, in 30 of these variations, self-assembly occurred.  Of these, half had stacked into filaments, similar to what is seen in sickle-cell disease, while the other half bunched together in a more amorphous way. Such amorphous assemblies are often dismissed as artefacts of misfolded proteins.  These results, however, suggest that functional forms of such “amorphous assemblies” may be more prevalent than commonly assumed, because they are so easy to evolve.

“Our approach required no complex computational design, nor did we need to scan thousands of mutations to find the one we wanted,” Dr. Levy says. “We simply started with an existing structure and found a simple strategy to induce the assembly of filaments. Now we are continuing to research this phenomenon to understand exactly how it happens in nature as well as in artificially mutated proteins.”