Home / News & Events / The same vision for all primates

The same vision for all primates

The world’s smallest primate reveals the incredible preservation of our visual system through millions of years of evolution.

Press release by the Communication Department, University of Geneva

Primates process visual information in front of their eyes, similar to pixels in a digital camera, using small computing units located in the visual cortex of their brains. In order to understand the origins of our visual abilities, scientists at the University of Geneva (UNIGE), in collaboration with the Max Planck Institute in Göttingen and the National Museum of Natural History in Paris, have now investigated whether these computational units scale across the large differences in size between primates. The gray mouse lemur (Microcebus murinus) from Madagascar is one of the smallest of them and weighs barely 60 grams. In a study published in the journal Current Biology, the scientists compared the visual system of the mouse lemur to that of other primates and found that the size of these visual processing units is identical in all primates, independent of their body size. As the mouse lemur is a very special species, sharing many traits with the very first primates that evolved 55 Million years ago, these results suggest an incredible preservation of our visual system and highlight the importance of vision in our daily lives and that of our ancestors in the distant past. 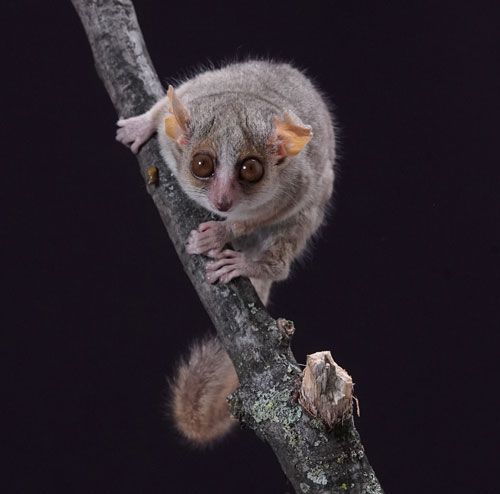 Figure:  The gray mouse lemur, the smallest species of primates, has excellent vision. More than one fifth of his cerebral cortex is dedicated to visual processing in order to accommodate a sufficient number of pixel processing units.

For more than a century, the visual system of primates has been intensely studied. These studies uncovered that unlike other mammals such as rodents, visual information is processed by small dedicated computing units located in the visual cortex. “As the different primate species cover a wide range of sizes, we were led to wonder whether this basic computing unit scales with body or brain size. Is it simplified or miniaturized, for example, in the world’s smallest primate, the gray mouse lemur,” asks Daniel Huber, professor in the Department of Basic Neurosciences at the UNIGE Faculty of Medicine?

To answer this question, the visual system of the mouse lemur was studied using an optical brain imaging  technique.  Geometrical shapes representing lines of various orientations were presented to the lemurs and the activity of the neurons responding to the visual stimuli was imaged. The repetition of such measurements gradually allowed them to determine the size of the minimal processing unit. “We expected to see a unit of tiny size, proportional to the small size of the mouse lemur, but our data revealed that they measure more than half a millimeter in diameter,” says Daniel Huber.

In collaboration with the Max Planck Researchers, Huber compared hundreds of these units imaged in the tiny mouse lemur brain with the data obtained for the visual circuits of other, much larger primate species. The team made a surprising discovery: not only was the basic processing unit almost identical in size in the 60-gram mouse lemur, as in larger monkeys such as macaques weighing about seven kilo- grams, or even larger primates such as us humans.

They also found that the way the units are arranged across the brain was totally indistinguishable, following the same rules with mathematical precision. The researchers also found that the number of nerve cells per visual unit was almost identical in all primates studied so far.

Göttingen Max Planck physicist Fred Wolf who had pointed out that universal mathematical principles may rule visual system evolution ten years ago is amazed by the degree of invariance: “55 Million years of separation on different continents is a very long evolutionary path to travel. I would have expected some mix of general similarity and characteristic differences between species in these neural modules. But the fact of the matter simply is: it is practically impossible to tell them apart.”

The visual circuits are powerful and incompressible

These results thus provide insights into the origins of primate vision. First of all, the fact that this unit is so well preserved suggests that it probably evolved very early in primate history, indicating that when it comes to form vision our primate ancestors had visual abilities similar to ours from the start.

Second, the discovery by UNIGE scientists and their collaborators reveals that this part of the visual system cannot be compressed or miniaturized. A fixed number of neurons seems therefore to be required to ensure its optimal functionality. “For tiny primate species with excellent vision, such as the mouse lemur, the visual system must hence be relatively large, compared to the size of their entire brain, to accommodate a sufficient number of visual processing units,” says the Geneva-based neuroscientist. Indeed, more than a fifth of the cerebral cortex of this lemur is dedicated to visual processing. In com- parison, the neural circuits related to vision occupy barely 3% of the human brain.

“This study also highlights the crucial importance of conserving the habitat of primate species such as the mouse lemur, particularly in the forests of Madagascar. These habitats are disappearing at an alarming pace, taking with them precious keys to understanding our own origins,” concludes Daniel Huber.