Oxytocin (OT), a neuropeptide produced in the mammalian brain, is implicated in the regulation of a large variety of social behaviors. So far, the activity of neurons that produce and release OT has not been directly recorded during actual social interactions.

Using a combination of electrophysiological and optogenetic tools, we recorded the activity of optically-labeled OT neurons of virgin female rats during exploratory behavior (open-field), free social interaction with a female conspecific, or chambered social interactions (in which rats could see, hear and smell, but not touch, one another) and showed that interactions between conspecifics elicit an increase of OT neuron activity in the paraventricular nucleus (PVN) of the hypothalamus.

We found that, among the sensory modalities analyzed, somatosensory stimuli occurring during social interactions, i.e. various forms of social touch, elicit the most reliable and pronounced activation of PVN OT neurons. Indeed, behavioral analysis revealed that close physical contacts, such as crawling behavior - one rat mounting another - triggered a much more pronounced increase in spiking activity and synchronicity of PVN OT neurons, compared with other social behaviors like anogenital or head-head sniffing or chasing the other rat. To prove whether OT neurons are activated by somatosensory inputs, we used compressed air delivery (‘airpuffs’) to mimic touch occurring during physical contacts on different body parts of lightly anaesthetized rats. Airpuff stimulation on the dorsal region of the body, but not on the abdomen, anogenital area or whisker pad, increases OT spiking activity. Altogether, these results suggest that PVN OT neurons are mainly activated by social touch. 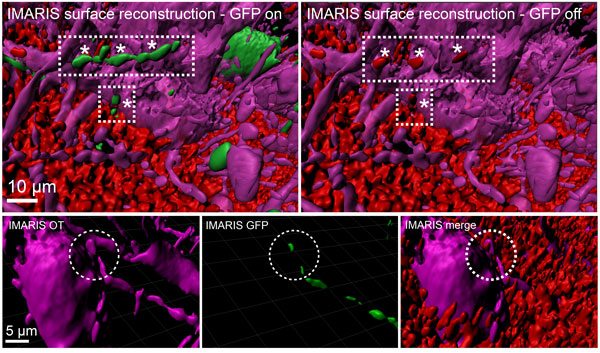 There are two distinct cellular types of OT neurons: magnocellular neurons, which comprise 97% of the population, and parvocellular neurons, which have been underappreciated for a long time and account for only 3% of the cells, but nevertheless play a fundamental role in various physiological processes. To further explore the effects of tactile stimuli on the OT system, we examined the expression of the marker of neuronal activity c-fos after repetitive airpuff stimulations and it appeared to be significantly increased in parvocellular, but not in magnocellular OT neurons. Employing in vivo calcium recording via fiber photometry, we investigated the role of parvocellular OT neurons in regulating the activity of the general population of PVN OT neurons and we found that parvocellular OT neurons mediate the activation of the OT system in response to somatosensory stimuli.

Next, we selectively manipulated the activity of parvocellular OT neurons via chemogenetics during free social interaction: activation of this population of neurons resulted in increased social motivation, while inhibition led to a decrease in social interactions with a conspecific. To unequivocally demonstrate that this pro-social behavior was mediated by activation of OT receptors in the brain, we performed intracerebroventricular infusion of a specific OT receptor antagonist and found a significant decrease in time spent with conspecifics.

In conclusion, given the importance of tactile inputs to activate oxytocin neurons, this study opens new perspectives for studying functional and anatomical connectivity between the somatosensory system and the oxytocin connectome in normal and psychopathological conditions including autism spectrum disorders, schizophrenia, antisocial personality disorders, depression, and anxiety.