Home / News & Events / Towards cyborg biology - electrochemical biosensors of everything

Towards cyborg biology - electrochemical biosensors of everything

The idea of combining man-made and natural systems has fascinated humans for centuries. However, despite the explosion of life science advances, the integration of electronic and biological systems remains woefully underdeveloped. Our HFSP-funded international team of protein engineers, chemists and electrochemists developed a novel approach for constructing artificial allosteric enzymes capable of producing electric current when activated by different biological inputs such as peptides, small molecules, and biochemical activities (proteolysis). This approach lays the groundwork for the development of systems for multiplexed continuous biochemical monitoring that ultimately will lead to a seamless interface between biological systems and electronic devices. 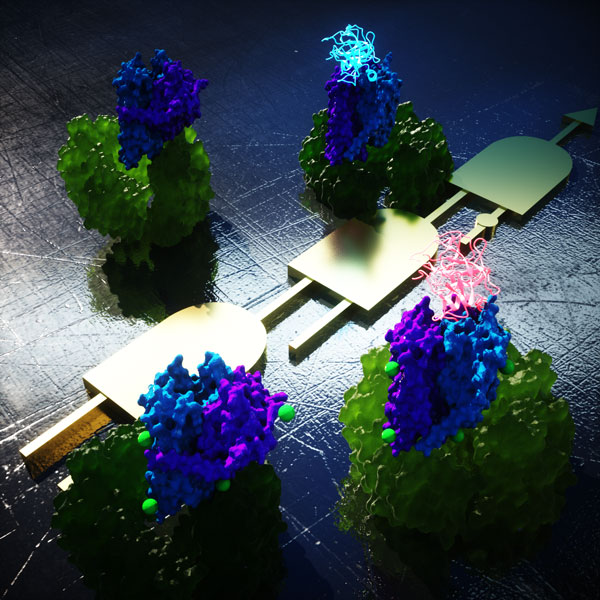 Allosteric regulation of proteins is fundamental to all biological systems and controls every aspect of information and energy processing in biology. Despite significant efforts and considerable academic and commercial interest, the ability to construct allosteric protein switches remains underdeveloped. We used structure-based protein engineering to convert an electrochemically pyrroloquinoline-quinone glucose dehydrogenase (PQQ)-GDH into an allosteric peptide sensor. This basic switch module was then used to construct biosensor architectures that can be targeted to practically any analyte. Activation of the core switch module resulted in glucose oxidation and production of electrons. We constructed nanostructured sensory electrodes functionalized with the described biosensors and demonstrated that they can measure the concentrations of the cognate ligands in solutions. We also demonstrated that such electrodes could be used as part of fuel cells and could operate complex electrochemical systems controlling polymerization state of materials and resulting in the release of molecules. We also demonstrated that the developed electrochemical switches could be controlled by magnetic field. This shows that complex bioelectronic systems can be constructed using the developed bioelectronic switches. The designed signal-activated allosteric enzyme has been used for processing chemical information mimicking Boolean logic gates, thus representing a system for unconventional biomolecule computing. This approach lays the foundations for the development of systems for continuous biochemical monitoring that will ultimately lead to a seamless interface between biological systems and electronic devices.

HFSP funding provided key resources for collaboration on this project and led to a multitude of academic outputs, including 10 publications. These fall in the area of protein engineering, biosensors, biofuel cells, biomolecule computing (information processing) and signal-triggered molecule release. The collaborative team has received additional funding from the US Department of Defense and submitted a joint application to the Synthetic Biology program administered by NIH. We expect that the developments under current funding will lead to new applications in the area of biosensing and continuous biochemical monitoring.