Most living organisms are exposed to predation. Cryptic colour patterns representing a random sample of background colouration reduce prey detectability by visual predators. Yet, background matching may be difficult if the background is highly heterogeneous, or if a prey is exposed to different backgrounds. By contrast, transparency has the potential to minimize detectability against virtually any kind of background, and could thus represent a powerful means of remaining undetected by predators. 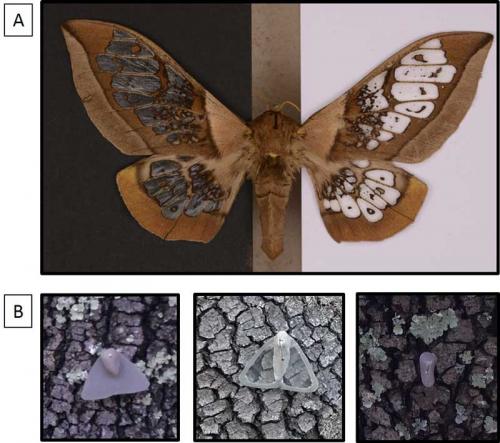 Transparency is widely found in aquatic environments, where it represents an efficient anti-predator defence, but it is rare on land because of optical and mechanical constraints that make transparency less effective and more difficult to achieve. Among terrestrial organisms, transparency is almost restricted to insect wings. In insects, however, butterflies and moths (Lepidoptera) usually sport opaque wings due to the presence of overlapping scales that cover the transparent wing membrane. Wings of Lepidoptera typically display colours that are involved in courtship, thermoregulation and in antipredator defences, such as camouflage. Surprisingly, partial or total wing transparency has evolved multiple times in unrelated Lepidoptera species, through the reduction of wing coverage by scales, thereby allowing light to pass through the wing membrane. One of the aims of our interdisciplinary HFSP project is to understand the ecological function of transparency in Lepidoptera, notably whether transparency reduces detectability in these terrestrial prey. Many moth and butterfly species harbour cryptic wing colour patterns that match the general background and thus hinder detection by predators. Several species with such cryptic patterns also exhibit transparent “windows”. Why has transparency evolved in cryptically-coloured Lepidoptera? Could a combination of cryptically-coloured opaque patches and transparent windows provide a lower detectability than purely cryptic colour patterns?

To test whether transparency decreases detectability on already cryptic terrestrial prey, we monitored artificial prey survival facing wild avian predators. Artificial prey consisted of “wings” made out of triangles of paper and an edible “body” made out of lard, water and flour. Such malleable edible “bodies” enabled traces of bird attacks to be registered (e. g., U- and V-shaped marks). These artificial prey resembled a generic resting moth, not any particular local moth species. Three different types of prey were used during the experiment: 1) a cryptic form that included complete wings + body, 2) a transparent form with wings including transparent windows and body, and 3) a wingless body. To produce the transparent form we cut two triangle windows from the paper wings and we placed a transparent film underneath the remaining parts. We used optical measurements and modelling to optimize the colour of the opaque parts of the artificial moths (wings and body) such that they matched (in the eyes of avian predators) the average colour of the green oak trunks they were pinned on. A total of 497 moths were randomly placed in forest habitats in southern France, where great and blue tits are abundant. We monitored prey “survival” once per day during four days.

We found that survival of moths with transparent windows was similar to that of wingless bodies and higher than that of fully opaque forms, suggesting a reduction of detectability conferred by transparency. Our study thus provides the first evidence that transparency further decreases detectability in already cryptic terrestrial prey. Future studies should explore the impact of the size and distribution of transparent and opaque patches on the animal’s body on survival. The costs and other potential benefits associated to transparency on land also remain open questions.

Link to article in Journal of Evolutionary Biology
PubMed link