A tunicate immune system reveals how similar we are

Through functional and molecular characterization on the cellular level of a colonial chordate animal we have found the evolutionary origins of our own immune and the blood-forming systems.

To gain insight into the origins of our immune system we have worked with a unique model organism, Botryllus schlosseri, a colonial tunicate, which is part of the chordates and our closest invertebrate relative. It has exceptional immune-based characteristics and the most interesting phenomenon is the natural transplantation. When two different individuals interact they can either reject one another, or they can fuse through their blood system. Once the fusion accurses, the stem cells of each animal freely flow from one animal to the other, and compete for who will build the tissues of this new chimeric animal. Therefore, the B. schlosseri has natural transplantation that happens through the blood vessels fusion and it is stem cell-based. 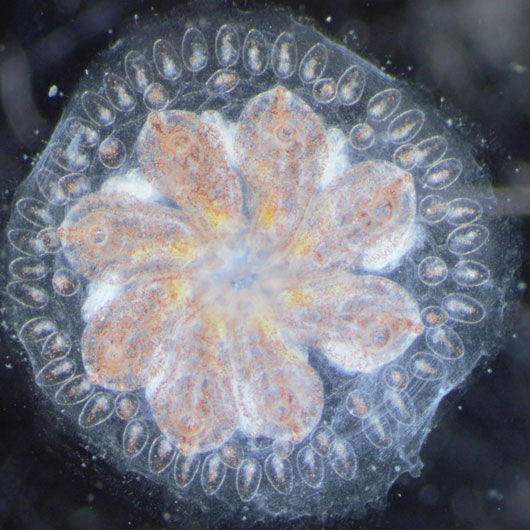 Figure 1: Botryllus colony that looks like a “flower” but it is actually our closest invertebrate relative. Each flower pedestal is an animal in the colony with its own heart, brain, and digestive system. At the end of the tunicate cuticle are the ampules which are the endpoint of the blood vessels, this will fuse or reject when colonies come together.

In order to characterize cell types, we have isolated more than 20 cellular populations from B. schlosseri colonies using flow cytometry techniques. We have done a deep molecular analysis of the genes that are expressed by each population. On the cellular and molecular levels, we have found: i) The myeloid lineage cells that are taking part in phagocytosis (the immune engulfment of a target) that are homologs to the human phagocytic cells. ii) We have discovered and isolated the cytotoxic cells of B. schlosseri that take part in the direct killing of target cells, those cells are responsible for rejection in transplantation. We succeeded to show that they work in a similar fashion to human Natural Killer cells by recognizing self-molecules on the target cells. iii) We have found and isolated the blood-forming stem cells and showed their differentiation potential to other cell types by transplantation assays; injection of cells to animals and showing their differentiation to different blood cell types. iv) We found that the sub-endostyle sinus is the blood-forming stem cell-niche in B. schlosseri. All our findings on the cellular and molecular levels were validated using functional assays of immune cell activity and transplantations. 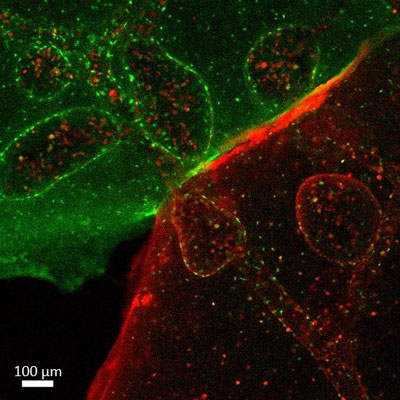 Figure 2: Two Botryllus colonies that were fluorescently differentially labeled are now fused. The fusion is through the blood vessels and cells from different colonies that can cross to the other animal. We can see the red cells going to the green colony and the other way around, and follow this natural transplantation live using the transparent body of Botryllus.

This multidisciplinary work was done by researchers in stem cell biology, immunology, genetics, bioinformatics, and physiology. Among them, the co-first authors Dr. Benyamin Rosental and Ph.D. student Mark Kowarsky and the senior authors Prof. Stephen Quake, Prof. Irving Weissman and Dr. Ayelet Voskoboynik from Stanford University. The first author Dr. Benyamin Rosental was a postdoctoral Long-Term fellow of the Human Frontier Science Program until September 2018. He has opened his new laboratory for comparative immunology in October 2018 at the Ben-Gurion University in Israel.