Mechanical properties of cells change during diseases such as malaria and cancer, making cell mechanics an important measurable parameter that can be used as a reporter of the cell’s condition. We were interested in a particular question related to cell mechanics: how would mechanical properties of cells change after uptake of vesicles? This is an interesting question because all body fluids contain vesicles that are secreted by cells, termed Extracellular Vesicles (EV). They are important mediators of cell-cell communication, transferring signaling molecules. But these vesicles are also made of membranes, and we wondered if their membrane would be incorporated into the cell membrane following their uptake, and hence change cell deformability. We were looking for a method to test this idea.

Due to the important role of cell mechanics, many techniques to measure mechanical properties of cells were developed over the years, including micropipette aspiration, magnetic bead cytometry, AFM, optical tweezers and others. Generally the available methods fall into one of two categories: there are single-cell methods that tend to be technically challenging and time consuming, as cells are measured one at a time, and there are high-throughput methods that miss the accuracy to de­tect subtle differences. As we wanted to look for a possible change that may be subtle, we needed a method that would be sensitive enough, but would also allow high throughput, which is important in order to discern subtle differences in a heterogeneous population of cells. This led us to develop our cell mechanics approach using Acoustic Force Spectroscopy (AFS). 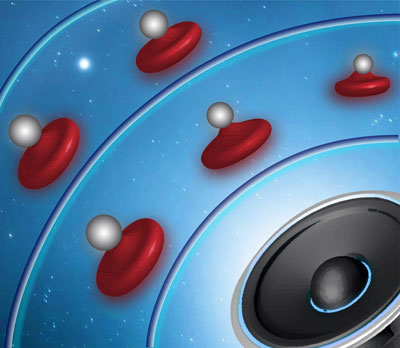 Image: Stretching cells using AFS: an artist's impression. During an experiment, cells are sandwiched between the flow cell surface and a microsphere. The microspheres which are attached on top of cells are pushed towards the nodes of the acoustic pressure field, thereby pulling on the cells. Image credit: Marilia Gavri and Giulia Bergamaschi.

In our approach, an acoustic pressure field is used to apply well-controlled forces up to 500 pN to cells confined between a microsphere and a surface. The microspheres which are attached on top of cells are pushed towards the nodes of the acoustic pressure field, thereby pulling on the cells. We track the position of the beads in three dimensions using a standard optical microscope, and thus can monitor the elongation of cells under applied force. We can analyze the response of the cells by fitting the elongation response to a simple viscoelastic model, thus extracting characteristic parameters such as the instantaneous elongation and time constants.  With this approach we were able to follow 30–50 single cells in parallel in real-time in each run, while exchanging the buffer and probing changes in mechanical properties of Red Blood Cells (RBC). To validate the ability of our method to detect mechanical changes, we applied chemical treatments of known effects to RBCs, and were able to detect statistically significant mechanical changes following both softening and stiffening treatments. After validating that our method works, we addressed our initial question and examined the effect of adding EVs to RBCs on their mechanical properties. We found that addition of vesicles to RBCs increased their deformability, and we attributed this to the possible incorporation of the vesicle’s membranes into the cell membrane.

As mechanical changes in cells often occur upon disease, our method can potentially be used in the clinic for diagnostic purposes. In addition, changes in cell mechanics following uptake of vesicles may be pathologically relevant, as in several disease states the concentrations of EVs are significantly elevated: in trauma patients, in the plasma of malaria-infected children, and in breast cancer patients. A patent application for this approach was recently filed by the researchers and licensed to LUMICKS, a spin-off company from the research group selling AFS technology. This research was enabled and supported by an HFSP Long-Term Fellowship.