Wearables can track physiological response to COVID and other diseases

A new algorithm analyzes heart rate measured over the course of a day to track many physiological systems.

Circadian clocks time most events within our body. The Forger, Brown, and Ueda labs collaborated through an HFSP Program Grant to understand how circadian timing controls sleep and sculpts it into the average 8-hour continuous bout we experience each night. However, as the COVID-19 pandemic hit and many of the planned visits and cross-fertilization of our HFSP project were put on hold, our team sought new ways to conduct research. We also wanted to make a difference in the fight against the pandemic. 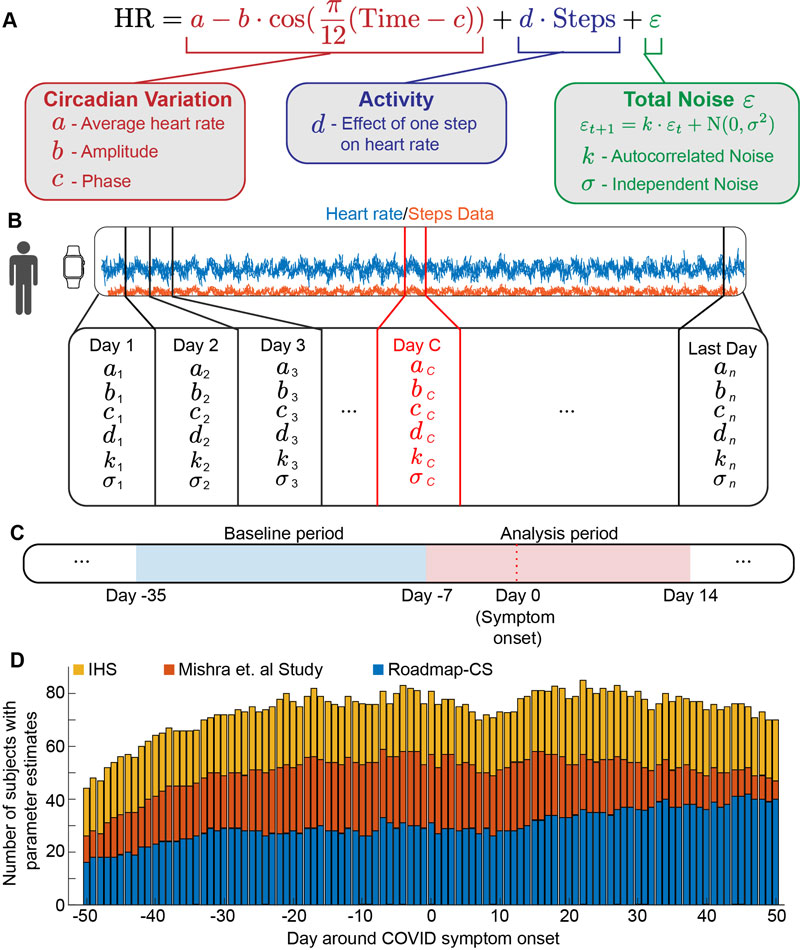 Figure:  A) A mathematical method to analyze daily heart rate data from wearables was developed. It extracts features of circadian timekeeping, cardiopulmonary health, and other physiological systems. B) Illustration of how these parameters were extracted daily. C) The study looked at a baseline period before infection and an analysis period which was further broken into pre-symptomatic and post-symptomatic regions. The team studied pre-detection during the pre-symptomatic period and tracked disease progression during the post-symptomatic periods. D) Histogram of the number of subjects used in the study and which cohort they belonged to.

The Forger group at the University of Michigan had been developing apps and IT infrastructure for other projects. We realized that this work could also help us determine how COVID-19 infection, and the pandemic in general, could change circadian rhythms and sleep. Thus, we launched the Social Rhythms app to collect wearable data anonymously during the pandemic. The free app was approved on the iOS and Android stores and translated into many languages. We collaborated with Sung Won Choi and Muneesh Tewari, colleagues at the University of Michigan, to get more than 2,000 students at the University to use the app. Srijan Sen’s group, which is also based at the University of Michigan, collected similar data on doctors who recently graduated from medical school. Some of these users got COVID, which gave us data, alongside another publicly available database, of wearable data from users who contracted COVID-19.

The key scientific question was to determine signals from this noisy and heterogeneous data which indicated COVID infection. The key to the analysis was identifying an internally driven circadian rhythm in heart rate. We also found other proposed markers of cardiovascular health and stress. These markers could be used to predict who was infected. We show how to study physiology in the real world, which could help to combat the next pandemic.

News release from the University of Michigan