Home / News & Events / What we can learn about vertebrate ancestry, immunology and skeletal formation from sponges

What we can learn about vertebrate ancestry, immunology and skeletal formation from sponges

A historic HFSP research grant awarded in 1996 for the project “Invertebrate molecular immunology: alloreactivity and putative immune genes” has been credited as one of the cornerstones of an impressive body of research on sponges. The output from this research spans many decades and has contributed to advancing our understanding of vertebrate evolution and immunology, and has also led to the development of new biomaterials with applications in medicine.

In 1996, Eric H. Davidson, the distinguished American developmental biologist at Caltech (USA), Baruch Rinkevich, the eminent botryllid ascidian immunologist, at the National Institute of Oceanography, Haifa (Israel), and Werner E. G. Müller of the University Medical Center of the Johannes Gutenberg University (Germany) received an HFSP research grant to study invertebrate immunology. At that time only sparse information had been gathered on the roots of Metazoa, with humans being the ‘crown species’. Therefore, it was hardly possible to outline general rules that governed the evolutionary trails of the basal invertebrate and vertebrate taxa. 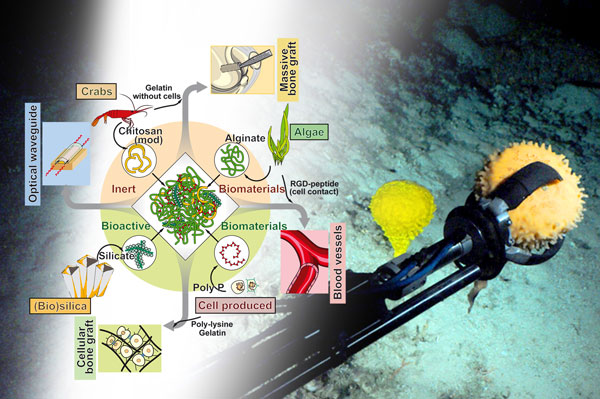 Figure 1: Sponges can serve as a stereoscope to study the emergence of the Metazoa on Earth, and are also a cornucopia of biomaterials suitable for biocompatible implant materials.

A true paradigm shift in our understanding of the evolution of the basal Metazoa occurred with the rearrangement of the Tree of Life and the establishment of sponges (Porifera) as the evolutionarily earliest hypothetical common ancestor of all animals, the Urmetazoa [1]; Figure 1. By continuing the molecular phylogenetic studies and the subsequent improved understanding of gene regulatory networks, especially using urchins as models, it was disclosed that the vertebrate immune system evolved from basal invertebrate taxa by inserting new elements into old gene regulatory networks [2]. The molecular and subsequent functional analyses with invertebrate animal taxa provided a general view of the basic principles of the adaptive immune system in vertebrates. 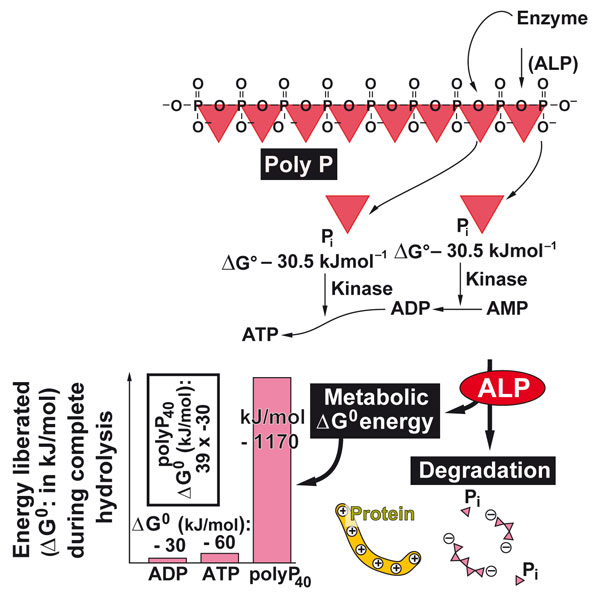 Figure 2: Polyphosphate serves as energy storage in the extracellular space of Metazoa. With the help of alkaline phosphatase and adenylate kinase the metabolic energy is retrieved from this polymer and transferred to ATP. ATP in turn serves as a cofactor for anabolic biochemical processes.

It came as a surprise when, with the help of Louis Du Pasquier (University of Basel), it was disclosed that sponges contain molecules with immunoglobulin-like domains that are polymorphic [3]. Later in evolution DNA recombinases, that are involved in the rearrangement of immunity-related genes, evolved, like the immunoglobulin genes. Research elements like this contributed to the understanding of the metazoan immune recognition processes.

Building on these evolutionary concepts it became possible to disclose another unsolved puzzle in the metazoan Bauplan formation, meaning the building and the organisation as well as the axis formation of the hard skeleton. Since all biochemical processes in animals are driven by enzymes it was pressing also to identify enzyme(s) that allow the fabrication of inorganic mineral deposits. In most sponges silicate is the principle inorganic component of the hard tissue, the skeleton. In turn, the first enzyme was identified that initiates and maintains the formation of the biosilica skeletal elements, silicatein [4]. Again, exploiting the principles of evolution, the first enzyme has been identified that mediates and synthesizes Ca-carbonate-based initial skeletal elements, carbonic anhydrase [5] and, together with alkaline phosphatase, the first enzymes that are involved in hydroxyapatite-based bone assembly [6]. Indeed, sponges have been instrumental in understanding mineralization processes and have proven to be a valuable source of novel biomaterials for medical implants (Figure 1, left).

Finally, sponges also helped to disclose the first generator of extracellular metabolic energy. It is the inorganic polymer, polyphosphate, that fuels the generator and deposits the energy in ATP [7]; Figure 2. Sponges are very rich in polyphosphate – in mammalians this polymer is concentrated in blood platelets. This discovery helped to understand the basis of the anabolic process occurring in the extracellular space.

Our HFSP grant is one of the cornerstones in our research and recently it also resulted in the development of a new protective barrier against COVID-19 virus attachment to human cells in the airway system [8]. However, more important than the financial support from the award was the distinguished reputation of an HFSP grant.