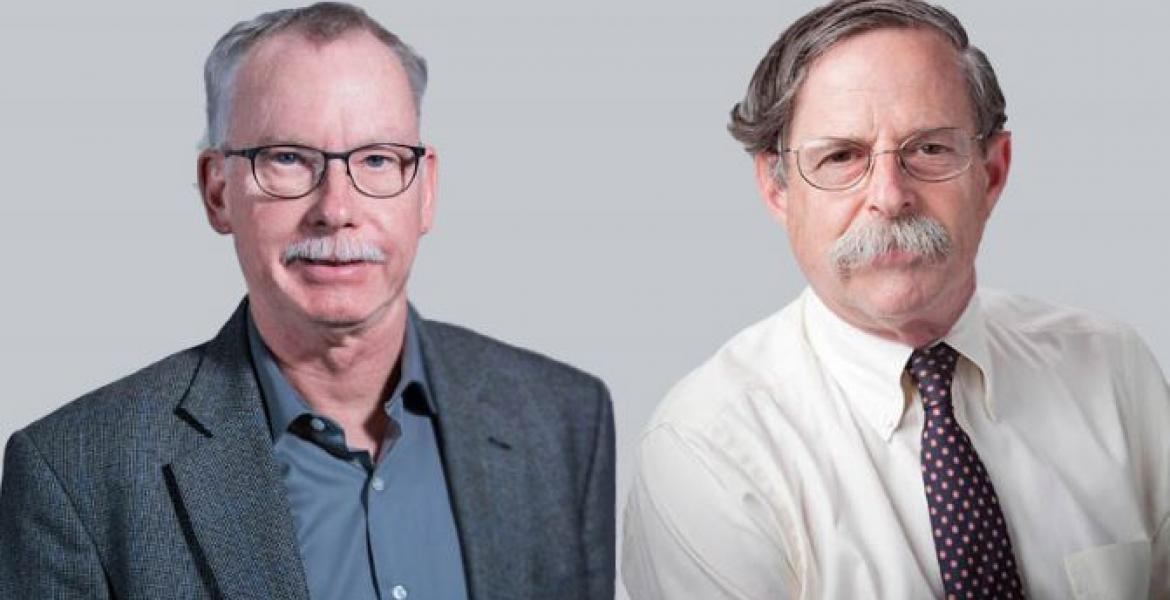 The 2022 HFSP Nakasone Award is awarded jointly to Franz-Ulrich Hartl and Arthur L. Horwich for their discoveries revealing the functions and mechanisms of chaperone-mediated protein folding and the implication of their work in understanding human disease.

General description of the research breakthrough

The ground-breaking discoveries by Hartl and Horwich established that many newly synthesized proteins do not fold spontaneously but rather need the help of specialised chaperones as folding machines to achieve their functional state. These molecular machines and their mechanics were illuminated primarily through the pioneering work by the laboratories of Franz-Ulrich Hartl and Arthur Horwich. Their contributions are numerous, crucial, and profoundly complementary. Moreover, some of their most important early discoveries stemmed from their direct collaboration. These discoveries commenced with the demonstration, in 1989, that protein folding in mitochondria requires HSP60 (which mediates ATP-dependent protein folding) and continued with the systematic dissection of the mechanism of the (homologous to HSP60) bacterial GroEL chaperonin, with both of the nominated researchers independently arriving at the critical insight that proteins fold within the encapsulated central cavity of GroEL-GroES. The discovery of this fundamental biological principle helps to explain the phenotypes of human disease resulting from failure of protein homeostasis, including certain neurodegenerative disorders, and offers the prospect of developing novel therapies.

Background to the research

After protein synthesis, linear protein chains must fold into three-dimensional structures to assume their function. In the late 1950s, Christian Anfinsen demonstrated that at least some proteins spontaneously fold into the correct structure. It was thus concluded that the protein sequence itself contained all relevant information to support the crucial, often multi-step, folding process, establishing a central dogma of cell biology. About 30 years ago, this dogma was overturned by the work of Hartl and Horwich, while studying the fate of proteins imported into mitochondria. Earlier, Walter Neupert and Gottfried Schatz had demonstrated that proteins are imported into mitochondria in an unfolded form; therefore, it was evident that they had to refold inside the organelle to attain functionality. It was generally assumed that this occurred spontaneously.

Motivated in part by their observations on the phenotype of human disease, Hartl and Horwich studied a yeast mutant, in which proper folding of imported proteins did not occur. Genetic analysis revealed that this process was carried out by a multiprotein complex - a “protein folding machine” – a double ring assembly composed of the heat-shock protein HSP60, in an ATP-dependent manner. This paradigm-shifting discovery demonstrated that protein folding is not generally a spontaneous process. Extensive further research showed that many, if not most, proteins use chaperones for efficient folding, whether inside the mitochondria or following synthesis on ribosomes in the cytosol. Although Anfinsen was correct in concluding that the information for folding resides in the amino acid sequence, chaperones are needed to realize that information in a timely manner and with high yield, preventing misfolding and aggregation. Hartl and Horwich subsequently provided many crucial insights into how this folding machinery and other chaperones work, revealing many important mechanistic details of the folding process. It now appears that the chaperonin system essentially creates small incubation chambers within the cell, providing confined environments in which newly synthesised proteins are isolated from others as they undergo folding. Importantly, the concept that cells delegate specific metabolic tasks to particular proteinaceous “containers” appears to be applicable to other cell biological processes. By way of example, we now know that the proteasome, a key mechanism for protein degradation and for fuelling a pathway for antigen recognition, also consists of a large barrel-shaped complex exhibiting interesting mechanistic parallels to the chaperonin complexes. In recent years, Hartl and Horwich continued to examine the fundamental properties of the cell´s chaperone network, but in addition are also studying a range of human diseases which are characterized by the formation of pathogenic protein aggregates.

Hartl’s research recently focused on the role of the chaperone system in regulating proteostasis, vital to the wellbeing of cells and organisms. For instance, a key mechanistic insight of potential medical importance was provided by the finding that extended stretches of glutamine exert their toxic function, among other effects, through sequestration of chaperones, suggesting a common mechanism underlying the pathophysiology of so-called polyQ diseases, such as Huntington’s disease. Hartl also demonstrated that mRNAs lacking a stop codon subvert the ribosomal quality control and cause protein aggregation, and, via sequestration of components of the protein folding machinery, lead to proteotoxic stress in cells, a phenomenon that might be a general feature of ageing cells, at least in invertebrates.

Horwich has added another twist to the problem of toxic protein aggregates. He has demonstrated that in another protein aggregation syndrome, amyothrophic lateral sclerosis (ALS, also known as Lou Gehrig´s disease), overexpression of a particular chaperone which forms part of a protein disaggregation complex, ameliorated the symptoms of the disease. Horwich described in considerable detail the individual steps of how the chaperonin achieves several cycles of protein folding inside its chamber. These studies have led to a more detailed appreciation of the assisted protein folding process with the potential to enable the design of novel therapeutic strategies to curb the toxic effects of protein aggregates.

Owing to the work of Hartl and Horwich, the previously obscure process of protein-assisted protein folding (its complexity was underestimated by early researchers) is now one of the most beautiful and important chapters of contemporary molecular biology. It is difficult to overstate the centrality of protein folding and its perturbations in the etiology of major diseases, including neurodegenerative syndromes.

Over the last two decades, working at first together and later independently, Hartl and Horwich have succeeded – through the rigor, incisiveness and sheer brilliance of their work – in advancing the understanding of physiological protein folding from a barely glimpsed landscape to a clear view, rich in illuminating details. The resulting research arena greatly influences several other fields, from basic biology to medicine. If one has to single out two scientists who are most responsible for our current understanding of in vivo protein folding, there is no question that these scientists are Franz-Ulrich Hartl and Arthur Horwich.

Franz-Ulrich Hartl and Arthur L. Horwich have consistently been at the forefront of the field of assisted protein folding since the 1990s and they continue to make seminal contributions in understanding the relationship between cellular chaperone capacity and the manifestation of diseases associated with protein misfolding and aggregation, including age-dependent neurodegenerative conditions like Parkinson’s and Huntington’s disease. Their collaborative work has been recognised with major national and international awards.

Franz-Ulrich Hartl received his MD degree from the University of Heidelberg, Germany, in 1985. He went on to carry out postdoctoral studies in the laboratories of Walter Neupert in Munich and William Wickner at the University of California, Los Angeles. He was appointed Group Leader at the Institute of Physiological Chemistry, University of Munich in 1987. He then became Associate Member in the Program in Cellular Biochemistry & Biophysics at the Sloan Kettering Institute, New York in 1991, and Member with tenure in 1993.  He held additional posts at the Graduate School of Medical Sciences at Cornell University, New York. From 1994 to 1997, he was an Associate Investigator of the Howard Hughes Medical Institute. Since 1997, he is a Director at the Max Planck Institute of Biochemistry, Martinsried, Germany.

Arthur L. Horwich received his MD degree from Brown University, Providence, USA, in 1975. After an internship and residency in paediatrics at Yale New Haven Hospital, he was a postdoctoral fellow with Walter Eckhart at the Salk Institute in La Jolla. After a second postdoctoral position with Leon Rosenberg in the Department of Genetics, Yale University School of Medicine, he became Assistant Professor of Genetics, rising through the ranks to become Full Professor in 1995. From 1990 to 2020, he was an Investigator with the Howard Hughes Medical Institute.